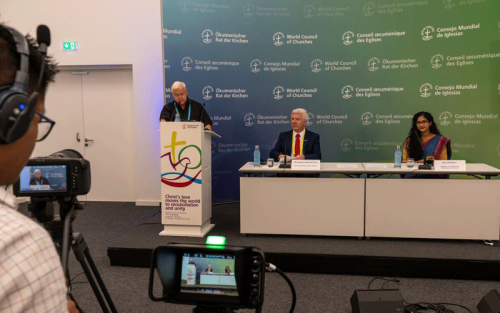 A press conference was given Monday by Rudelmar Bueno de Faria, general secretary of ACT Alliance and a member the Evangelical Church of the Lutheran Confession in Brazil, and Ruth Mathen, delegate of Malankara Orthodox Syrian Church, at the 11th Assembly of the World Council of Churches, held in Karlsruhe, Germany, through Thursday. (Photo by Sean Hawkey/WCC)

LOUISVILLE — Asked by a journalist about young adults being underrepresented at the World Council of Churches’ 11th Assembly, Ruth Mathen, delegate of the Melankara Orthodox Syrian Church, said a quick look at the dais would speak against that argument.

“The WCC is the first space I have been able to share a table with someone as senior as the general secretary of the ACT Alliance,” said Mathen during Monday’s press conference, which can be viewed here.

Mathen was referring to the person seated at her right, Rudelmar Bueno de Faria, a member of the Evangelical Church of the Lutheran Confession in Brazil. “That kind of space I would not find anywhere else as a young person, and so I’m very grateful for the structure of the WCC that allows young people to be present and speaking with such seniors,” Mathen said. “That for me is a very encouraging sign.”

Still, she said, it’s time for young people to start playing a greater role on decision-making bodies. Mathen suggested one strategy for supplying the WCC’s Central Committee with 25% of its membership with young people: Until the desired quota is reached, “leave the seat blank. That itself would be a message that young people are missing from this particular conversation.”

Many young people “are in a state of despair at this moment,” she said. “We don’t feel supported or encouraged that things will be all right. … We live sustainable lifestyles and we try to be very mindful of the products and services we consume. We try to be as ethical as the system allows us to be, but unless we mobilize for institutional change, our personal choices won’t have much of an impact.”

That’s where “bodies like this, and churches as a whole, can make a statement and make an impact,” she said. “That message of hope I think comes from faith communities. If we amplify our voices as faith communities and reach out to these disillusioned young people, I think we will be able to accompany them in a much better way.”

Asked about the largest humanitarian crises that ACT Alliance is currently assisting with, Rudelmar named the war in Ukraine, but “we’re also responding to situations in Afghanistan, South Sudan, Yemen — all those forgotten emergencies. Nowadays it seems like only Ukraine is a problem. We see plenty of money going to Ukraine and nothing for the protracted crises we see in Africa, Asia, Latin America and even in Europe.” ACT Alliance, a partner of relief organizations including Presbyterian Disaster Assistance, currently has global response funds related to about 50 emergencies worldwide, he said.

In response to a question on how to counter religious nationalism, Mathen said Christian minorities face the problem “across Asia.”

“The sphere of influence that we have as a minority is reduced. We occupy only the spaces we are allowed to occupy, and often these spaces are limited to the margins,” she said. “Yet even from the margins, we still have the mission, and we have to raise our prophetic voice against injustices no matter the resistance we face. That must continue in the face of this shrinking space.”

“When it comes to holding people accountable, this is not the task of just young people. It’s the task of every citizen on this planet,” she said. “One way I can suggest holding corporations responsible is to use your dollar as your vote. Information is abundant on the practices of production and on where such companies source their materials. What is the kind of labor they employ? What are the strategies of logistics in shipping? Who are the people who fall through the gaps? If churches can make vocal this message of consumer responsibility, of challenging today’s mindless affluence from the pulpit, I think when we reach out to the consumer in the congregation, that can send a very powerful message to corporations.”

Rudelmar said ACT Alliance and other organizations are working on not dividing important humanitarian and advocacy work into siloes.

“They are interconnected,” he said. “It’s not only delivering humanitarian [goods and services] but also asking, why do wars happen? Why are people not prepared for and not resilient for the crisis we know is there?” That’s why ACT Alliance offers programs that address climate justice, gender justice, peace and human security, migration and displacement, and disaster risk reductions, he said. “It’s part of responding to the [United Nations Sustainable] Development Goals in a prophetic way,” he said.

Mathen’s home city — Mumbai, India — is home to one of Asia’s largest urban forests, which is known for its unique biodiversity. Recently, she said, it was the site of “a massive development conflict” with transportation authorities.

“This was pushed back heavily by the young people,” she said. “Many of my friends were on the streets protesting.” Project developers, she said, were “circumventing the [court] order not to touch trees by knocking them down with a bulldozer.” Young people continued their protest in the face of arrests, clampdowns and isolation, she said, and now the proposed site for a new maintenance facility has been moved.

“We moved our action from social media to the streets,” Mathen said. “Young people are known for their blogposts and Instagram stories and their websites. But getting our activism on the streets was certainly a positive example.”

Rudelmar encouraged those gathered “to work together, and not just in our ecumenical bubble. We need to work cooperatively with all those who are somehow influencing policies,” especially those policies related to the climate crisis, he said. He pointed to ACT Alliance’s invitation extended by the World Economic Forum to “be part of the discussions to build a new social contract focused on human dignity, justice and sustainability. We are bringing our perspective, our convictions and our values to determine the future of policies and denounce the injustices that happen within these sectors.”

“There are a lot of people,” he said, “who share our values.”