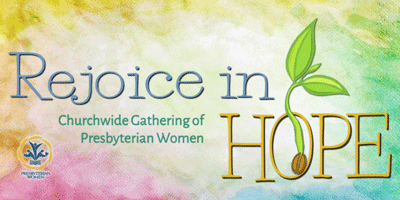 LOUISVILLE — The Rev. Irene Pak Lee, associate pastor of Stone Church of Willow Glen in San Jose, California, told the churchwide gathering of Presbyterian Women on Thursday that her one-year-old daughter, Eden, born during the pandemic, has enjoyed milestones of late, including seeing the inside of her mother’s church for the first time, going to the grocery store and being held by someone other than her parents.

Lee said it wasn’t even a certainty whether her husband, Marion, could even be present for the child’s birth (in the end he was). She called their daughter “the unifying grace in our family last year.”

“I won’t lie. It was hard not having that community (to welcome their second child),” Lee said. “But having a baby in the midst while injustice was all around helped center us. Eden was and is our joy.”

The couple’s first child, Ezra, who’s 3, “smiled big at everyone he met. But she was super skeptical of everyone she saw. Even as the mask mandates were lifted, she always furrowed her brow and would not crack a smile for anyone. You could dance or play peekaboo, and she’ll just stare you down.” 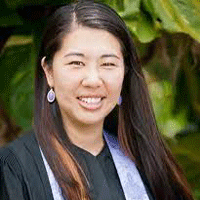 “I kind of love this about her,” her mother said. “She is no-nonsense. I love this because I was not like this.” As the daughter of immigrants, “I have been taught and trained to cater to the needs around me. It has taken me more than 40 years to live authentically into who I am, to speak my voice.”

When Eden was nine months old, eight people — six of them Asian women — were killed in the Atlanta spa shooting. “I was grieving and angry,” Lee said. “I didn’t have any words to express myself about all the acts of hate and violence against people of color.”

The next morning, Eden puffed out her cheeks and blew out a long stream of air. The act made her mother laugh, which made Eden laugh, too.

“Looking at her face in the midst of my own grief, I saw hope, the hope of things yet unseen,” Lee said. Eden is a third-generation Korean American. “We have been able to shelter her and make her feel only safe in this world,” Lee said. But unless we’re able to dismantle racism in the next few years, “she will grow up and at some point be told to go back where she came from.” It’s also likely, Lee said, she’ll attacked, as well as stereotyped as submissive and good at math and hard-working “as a way to pit her against other people of color. She’ll be told, ‘I don’t see you as Asian.’”

Here’s the difference for Lee: “Even if these things happen to her, instead of politely smiling or shrugging it off, I hope my beloved child who stares people down … will speak with pride and say clearly, ‘I want you to see me as I am. You will not pit me against my neighbor.’”

“Friends, this is the hope I can name and rejoice in this day.”

Both Eden and Ezra are members of a generation coming up “unafraid to be who they are,” Lee said. “It’s not too late for us, either. We might have to practice more, but we can do this too — for ourselves, our neighbors and for our global community.”

“May we rejoice in that kind of hope today.”