Shining a light on the need to #SaveAsylum 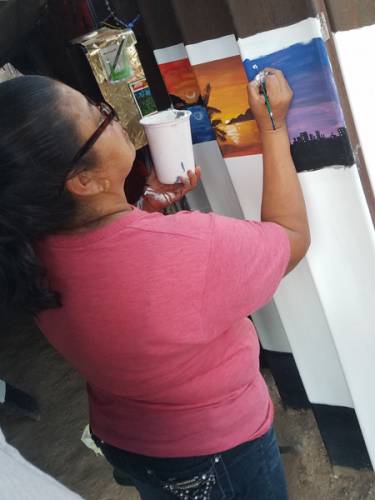 Doña Lupe learned to paint with the U.S. border wall as a canvas while living in a tent by the Port of Entry awaiting the opportunity to petition for asylum. (Contributed photo)

Asylum seekers, civil society, people of faith, artists, and local leaders from the United States and Mexico will gather on both sides of the border wall just west of the Raul Hector Castro Port of Entry in Agua Prieta, Sonora, Mexico, and Douglas, Arizona, to pray, hear testimonies from asylum seekers, receive their claims, reflect, and take action to #SaveAsylum.

#SaveAsylum is a project of the New Sanctuary Coalition (NSC), a multifaith immigrant-led organization that creates support systems for and empowers those navigating the immigration system. NSC’s grassroots programs are designed to “shine a light on and disrupt the systems that criminalize immigrants’ existence.” Some of the core programs include a pro bono immigration clinic, accompaniment, anti-detention advocacy and community organizing. 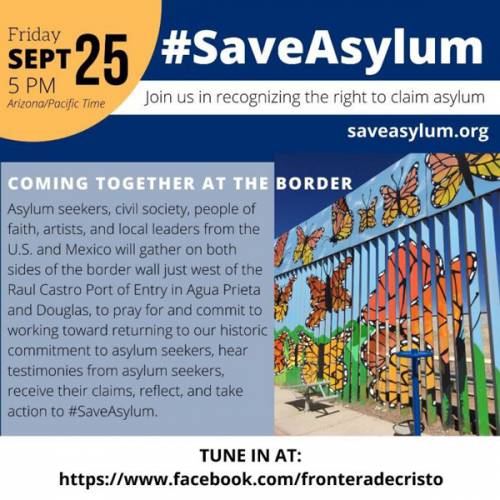 Friday’s event will be offered in Spanish and English and will be both in-person (masks and social distancing required) and online through Facebook live from the Frontera de Cristo Facebook page, found here.

The backdrop is one of two communities divided by an 18-foot steel wall. There are “Danger Do Not Enter” signs posted on both sides.

From the north, people will see rusted bollards topped with two strands of concertina wire. From the south, viewers will see beautiful murals painted over oxidized bollards with musical instruments and flora and fauna from the home countries of families who have made their way to the border seeking asylum.

“The family of God will gather on both sides of  the dividing wall to pray, to sing, to lament; to hope and to commit to working for a world that is more just, peace-filled and loving,” said mission co-worker the Rev. Mark Adams.

He shares the story of Dona Lupe y Don Roberto, who left their home last November and arrived at the border in February 2020. The U.S. began metering the access to asylum seekers in 2018, limiting the number of persons who could apply at ports of entry. The U.S. accepted their daughter (Sara) and grandson (Raguel) in mid-March. Dona Lupe and Don Roberto were next in line when the border closed.

Before the border closed to asylum seekers on March 21, the wait in Agua Prieta just to access the system was six months. In other border towns, the wait is even longer. U.S. immigration courts have been closed by the coronavirus pandemic as well, and as a result the asylum process has slowed significantly once asylum seekers reach the U.S.

More information is available on a new border lens site of the Southern Border Communities Coalition, for which Frontera de Cristo is the Arizona anchor organization. Learn more here.

“Our feeling is that the president does not want to open up the border (it was never closed to U.S. citizens and residents, nor commerce) for Mexican border crossers and definitely asylum seekers,” said Adams. “The administration is using the coronavirus as an excuse to further their broader aims of restricting legal immigration in general, including asylum seekers.”

During Friday’s event, the Rev. Brad Munroe, presbytery pastor to the presbyteries of Grand Canyon and de Cristo, will read a statement from the Rev. Dr. J. Herbert Nelson, II, Stated Clerk of the General Assembly of the PC(USA). In his statement, Nelson laments the pain and suffering the U.S. is causing those seeking refuge.

“I am honored today to add my voice and call on all who are members and congregations of the Presbyterian Church (U.S.A.) to join me,” Nelson writes in a letter dated Sept. 21. “Let us work together with other institutions of civil society — faith communities, legal authorities, human rights organizations, and public health officials — who are leading the Save Asylum events along the US/Mexico border to lift up the ways this government is failing to uphold our immigration laws. Let us urgently seek ways to address the injustice, hold our government accountable, and be a part of the justice-making happening each and every day.”