The Rev. Sally Foster-Fulton has led Christian Aid in Scotland for the past six years

by the Church of Scotland | Special to Presbyterian News Service 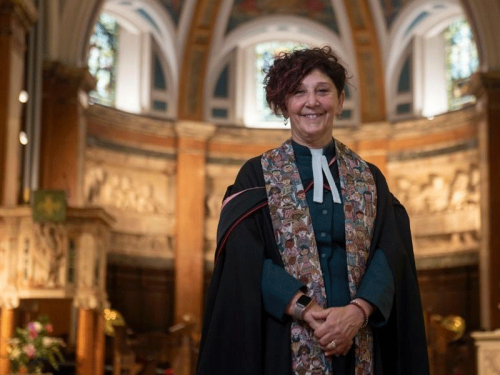 The head of a Christian charity that fights global poverty has been named as the next Moderator of the General Assembly of the Church of Scotland.

The Rev. Sally Foster-Fulton, 58, who has led Christian Aid in Scotland since 2016 and was born and raised in South Carolina, will take a year’s sabbatical to become the Church of Scotland’s ambassador at home and abroad for 12 months beginning in May 2023.

She said she is looking forward to meeting and encouraging people involved in church work at local, national and international levels at a time of unprecedented challenge and opportunity.

A minister with experience working in parishes, hospital chaplaincy and as convener of the former Church and Society Council of the Church of Scotland, the Moderator Designate said she’s “excited about what the year will bring.”

“I genuinely love and am inspired by the Church of Scotland and its people,” Foster-Fulton said. “Over the past years of the pandemic in the face of a global climate emergency and now a cost-of-living crisis, people across the Church have been stepping up and doing their very best to make an extraordinary impact in communities, locally, across our nation and in the world,” Foster-Fulton said.

Foster-Fulton is married to the Rev. Stuart Fulton, a fellow Church of Scotland minister who serves the parish of Newlands South Church in Glasgow, Scotland. The couple have two adult daughters, Alex and Gracie.

Foster-Fultoon recently became a grandmother and she said her new role has shifted her perspective and given new meaning to her commitment to try and make the world a better place.

The international charity’s work is sponsored by 4denominations. Church leaders and volunteers from many backgrounds sit on its board and raise millions to support its mission. The churches are the mainstay of its support network.

“Partnership work is what I love to do,” Foster-Fulton said. “Christian Aid works with people of all faiths and none to eradicate poverty in every part of the world.”

Foster-Fulton convened the Church of Scotland’s Church and Society Council from 2012-2016 and helped advance the Church’s work on human rights, climate justice and support for people struggling to overcome poverty in Scotland as well as overseas.

She campaigned on behalf of detainees and led the Church’s work with ecumenical and interfaith partners to create networks of support for asylum seekers and refugees.

In the runup to the 2014 Scottish Independence Referendum, she helped create space for respectful dialogue between campaigners on both sides of the debate.

She said she is proud of the support that local churches give to national and international partners.

“What church congregations do locally in their communities is critical,” she said. “It is what gives the Church’s voice validity when we speak truth to power.”

“Sometimes we talk about local and international work as if it is an either/or, but if there is one thing my work with the Church of Scotland, Christian Aid, this recent pandemic and the climate crisis has affirmed, is that we are all in this together,” she said. “There is no separation between what we do for people in our global neighborhood and what we do here at home.”

“There is no them and us,” she added. “There is just us and we have all got to look after one another.”

“My family was the church and before I understood what that meant,” she said. “I felt welcomed, loved and part of something.”

The Moderator Designate said she was captivated by Bible stories that sparked her imagination, turning her into a reader and a writer who has published three books of prayer and reflection as well as countless reports, articles and commentary.

She admitted that as a teenager she had so many questions and doubts that she wondered if she could remain in the church. But after she shared them with a retired minister who spent a year at her church in South Carolina, her Christian faith was strengthened.

“Dr. Gettys told me that it is our questions that keep our faith alive, and that just blew the door wide open for me,” she said.

She earned a degree in English literature and religion at Presbyterian College in Clinton, South Carolina, then studied at Columbia Theological Seminary in Decatur, Georgia. While attending seminary, she met her husband-to- be, an exchange student from Glasgow.

When she came to Scotland, Foster-Fulton received an exchange scholarship to Glasgow University’s Trinity College, where she completed her divinity training. After completing her BD, she worked as a chaplain at Falkirk and District Royal Infirmary and The Royal National Scottish Hospital in Larbert before being accepted as a candidate for ministry in the Church of Scotland.

Ordained in 1999, her first charge was Camelon Irving Parish Church in Falkirk, where she spent four years as parish minister. It took some time for the couple to decide where to make their family home.

In 2003, they took up the role of co-pastors at Seneca Presbyterian Church, the PC(USA) congregation in Seneca, South Carolina, and stayed for four years.

“I love partnership work and at Seneca we were able to create partnerships with Habitat for Humanity, United Way and many others which was a wonderful experience,” Foster-Fulton said. “But all four of us wanted to come back to Scotland because it is our home.”

It is a decision for which Foster-Fulton said she’ll be forever grateful.

“I have a deep love for Scotland. It is a very inclusive and welcoming place,” she said. “I’ve never felt an outsider, and it is here that I feel most alive, most challenged and most at home.”

In 2007, Foster-Fulton was appointed associate minister at Dunblane Cathedral, where she served for 10 years before taking up her current role at Christian Aid.

Working for an independent charity with strong and formal links to the Church of Scotland, she has maintained her commitment, participating in the General Assembly, being a member of Stirling and now Glasgow Presbytery, and developing links with local congregations, providing pulpit supply wherever a minister is needed.

The Moderator Designate will serve at a time when Scottish presbyteries are making radical reforms against a backdrop of falling income, declining membership and fewer ministers to ensure that the Church operates more effectively and efficiently to meet 21st century mission needs.

“It is painful but at the same time there is a deep desire to get this done and move forward,” Foster-Fulton said. “It is difficult and necessary, but a critical piece of work for today, and there will be more work when we begin to live out the new plan.”

“So, we need to lift our gaze, remember who we are and why we’re here — to love God and each other,” she said. “The message of Jesus Christ is not just hope for the future but is lifegiving right here and right now.”

The current Moderator of the General Assembly of the Church of Scotland is the Right Rev. Dr. Iain Greenshields.