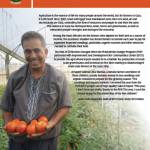 Learn how your gifts to the Presbyterian Hunger Program made a difference in 2020.
Currently 40 percent of all food produced in America is never consumed. Food Waste Weekend, held annually since 2016, is an opportunity for clergy of all faiths to share a message of hope for the hungry and to take action in all our abundance to make a difference for our neighbors in need. This liturgy… Read more »
The Global Food Week of Action includes World Food Day (Oct. 16), International Day for Rural Women (Oct. 15), and International Day for the Eradication of Poverty (Oct.17).
Download Gracie’s other adventures: Gracie and the Food Desert (2015) Gracie Becomes a Neighbor (2014) Gracie and the Big Storm (2013) Gracie and the Great Pearl (2012) Gracie Finds Joy (2011) Gracie and the Sea Star (2010) Gracie’s Treasure (2009) Gracie and the Two-Legged Fish (2008) Little Fish Finds Her Name (2007) The Little Fish with… Read more »
Create a community garden or other faith-based initiative using the Food Sovereignty for All Handbook for guidance.
This publication is a project of the Indiana University’s Center for Public Health and was adapted with permission by the Presbyterian Hunger Program. A handy feature of this guide is the ability for anyone to add local urban agriculture organizations and resources on the last page by typing into the PDF and saving, thereby customizing… Read more » 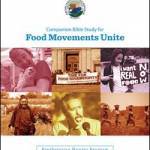 Food Movements Unite! is a challenging, sometimes disturbing and ultimately hopeful book written by people who are working to enlarge and unite food justice movements in the United States and around the world. Part of the book’s premise is that the globalized and industrialized food system is unjust, unsustainable and fundamentally broken. Download this new companion… Read more »