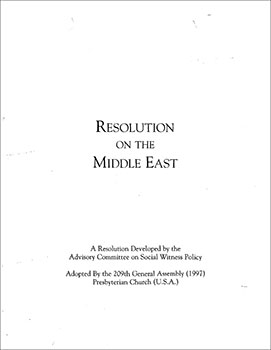 Painfully aware that the conflicts in the Middle East have exacted a terrible toll in human suffering and exacerbated international and interreligious tensions for more than half a century, and taking account of both the accomplishments so far and the challenges ahead, the 209th General Assembly (1997) believes that the peace process started in Madrid and cosponsored by the United States still holds the promise of achieving a comprehensive and lasting peace, and that the United States needs to continue to play an active role of mediating peace and, in some instances, to take initiatives for reconciliation and restoration of relationships with countries with whom there continue to be barriers of hostility and alienation.”