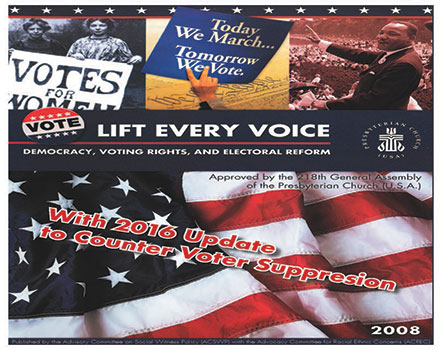 This resolution affirms the extension of the Voting Rights Act of 1965, as amended, and opposes?all measures that would disenfranchise voters on the basis of race or other condition. It supports the re-enfranchisement of felons who have paid their debt to society and “full voting rights” for the District of Columbia. It urges variability of voting machine totals, as well as “best practices” in the administration of elections. It opposes “caging,” “purging lists,” special ID requirements, and other arbitrary challenges and intimidation of voters. It favors public funding and lobbying restrictions designed to curb favoritism and conflicts of interest. Beyond improving the current system, it recommends ways to rotate primaries and deal with consequences of the Electoral College, such as a national popular vote based in an affirmative right to vote, and reforms such as “Instant Run-o Voting” and “Proportional Voting,” a voting holiday or weekend, non-partisan election commissions, universal voter registration, and more.