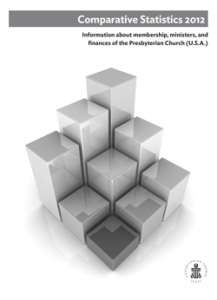 The Comparative Statistics report is published annually in the fall and summarizes data on membership, finances and ministers provided by each congregation to the Office of the General Assembly via the Session Annual Statistical Report. The report compares annual statistics to show trends in areas such as membership gains and losses, receipts and expenditures, and number of ministers.