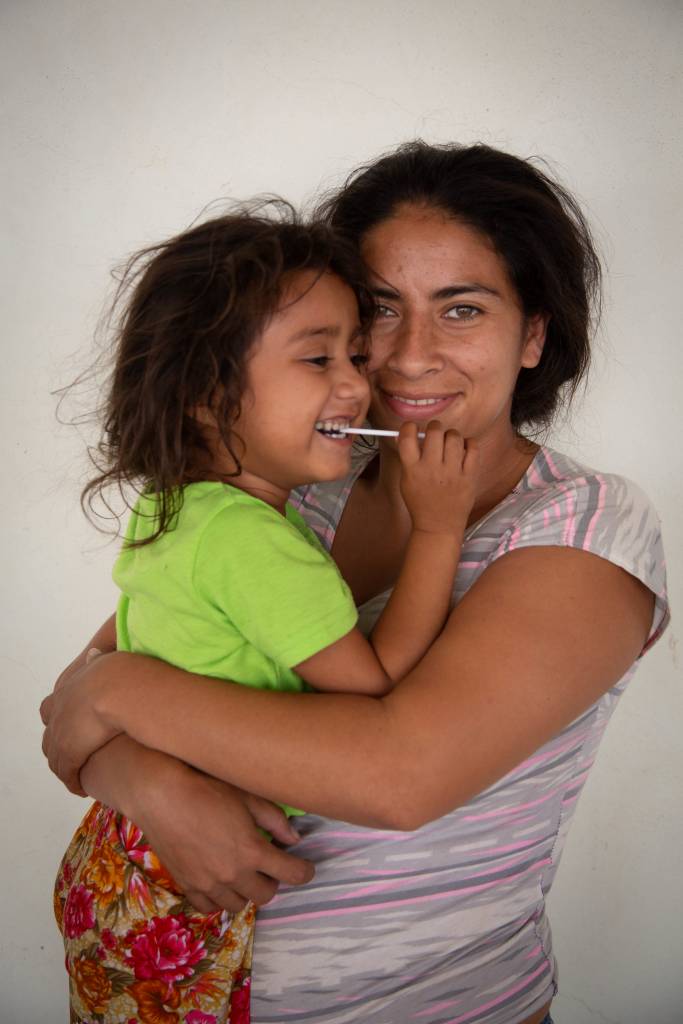 In anticipation of Mother’s Day, we hold up strong women from the Bible who trusted that God would deliver their children, even as they embarked on journeys not always of their own choosing.

We remember Jochebed, who defied Pharoah’s edict to kill all newborn Hebrew boys by doing the only thing she could think of to save his life: placing her baby boy in a basket along the river Nile. We recognize today’s Jochebeds, forced to the edge of the Rio Grande, praying that God will protect their children’s lives as they cross the river to what they hope will be safety and a better life.

We remember Hagar, expelled from her homeland with her son Ishmael. Alone in the wilderness, when her heart could not bear to watch her child suffer, she set him apart, behind some bushes so she wouldn’t have to hear him cry. We are reminded of the Hagars of today, on arduous journeys from their homelands, not knowing how they will care for and protect their children. We recall the Haitian mother who was thrown out of a Del Rio, Texas hospital after giving birth and whose child has survived only because kind volunteers came to their rescue.

We remember Elizabeth, whose son felt called to leave home and preach a radical message that would challenge both the political and religious authorities of their day. After waiting so long for the joy of motherhood and the excitement of feeling him leap in her belly, did she know what lay ahead? Did she know that he would one day be executed? We remember the Elizabeths of today who have birthed and nurtured our modern prophets, raising children who will one day stand for justice, freedom, and God’s love. These same mothers must watch as their children suffer wrongful imprisonment, torture, and even execution.

We remember Mary, who fled with her husband and newborn son to Egypt to escape infanticide. As Jesus grew, she watched him become a sojourner, knowing that she could not hold on to him. This mother, who would one day stand at the foot of the cross and watch as her son’s body was taken away and laid in a tomb. How confused and frightened she must have been to find the same tomb empty just a few days later, with no idea where her son had been taken! We remember today’s Marys, whose sons and daughters have been disappeared, taken away by government forces, killed by conflict, forced to hide, or leave their countries for their very survival.

In the name of all these mothers, we have some good news to share about the latest developments in U.S. policy for refugees and asylum.

Announced on Good Friday (April 15th), we applaud the government for its designation of Temporary Protected Status for people from Cameroon and we anxiously await the regulations laying out application procedures. Thousands of Cameroonians are members of the Presbyterian Church U.S.A. and we expect many of them will qualify for this important status.

On April 21, President Biden announced the Uniting for Ukraine program, a streamlined process to admit Ukrainians fleeing their country due to Russia’s military invasion. US-based individuals and entities can now apply to sponsor Ukrainians to come to the United States through this program by declaring their financial support as well as passing a background check to be a sponsor. Episcopal Migration Ministries has expanded their Neighbor-to-Neighbor Program to help match Ukrainians who need support with faith groups.

There are also changes underway for how people at the U.S./Mexico border can access the asylum process. Oral Arguments were heard on April 26th in a Supreme Court case regarding whether or not the Biden Administration can end the Remain in Mexico policy (aka MPP). Congressional debate has been ongoing since the announcement of the end of Title 42’s use to expel migrants and asylum seekers. Meanwhile, the Department of Homeland Security has released a plan for how to streamline the asylum process at the border, including eliminating an automatic referral to the immigration court for removal proceedings. For more information on these recent developments, read the Latin America Working Group’s Migration News Brief for April 29, 2022.

O God of all creation —

who are living embodiments of your steadfast love.

Like a mother, your love for us is both fierce and tender.

You formed all your children in the womb of love,

knitting us in your image with strong and gentle hands.

Stir us to recognize the boldness of your grace.

Just as you seek to gather up your children

as a hen shelters her brood beneath her wings,

so do refugee mothers long to stretch out their arms

and create a safe and sacred refuge for their beloved children.

Embolden us to build communities of embrace.

O God who suffers with us,

We grieve the systems of violence

uprooting families from their homes.

all these drive mothers to confront choices

no family should have to endure.

Make your presence be known alongside all who suffer.

Prepare our hearts for the hard work of solidarity.

O God who sustains us,

May refugee mothers’ journeys be short.

May there be plenty of room at the inn

and an abundance of innkeepers

May we boldly accept your call to care for the stranger among us.