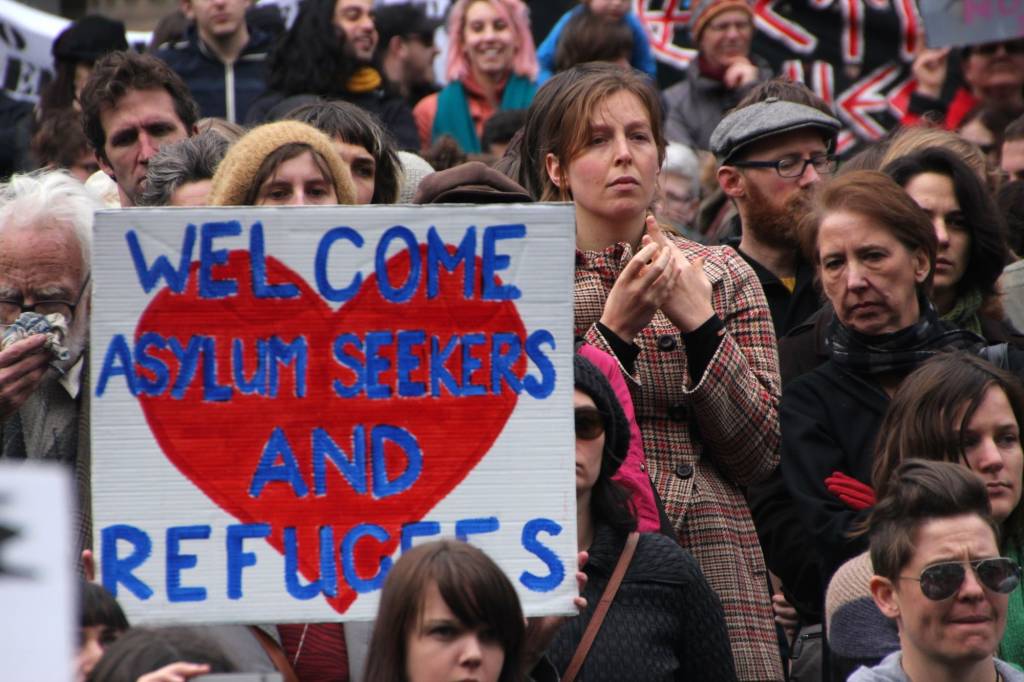 We are one in the Spirit, we are one in the Lord. These lines from the hymn “They will know we are Christians by our Love” are familiar to many who grew up in the U.S. church during a certain era. These phrases came to mind as I was thinking of the convergence between our PCUSA liturgical calendar and the federal government’s calendar, since both World Communion Sunday and the beginning of the new federal fiscal year take place at the beginning of October. So, what does this song and these two occasions have to do with each other? They both make me think of refugees and displaced persons around the world.

On World Communion Sunday we are reminded of our connection to people of different backgrounds, life circumstances, and experiences. This year, as we celebrate communion “with saints of every time and place”—when we are physically separated even within the same congregation—I cannot help but think of my Christian siblings who cannot gather due to the need to flee their homes or homeland as a result of civil unrest, war, or famine. When we take up the Peace & Global Witness Offering, I am reminded of the places around the world in search of peace. I am reminded of God’s call to us to be witnesses for justice and peace alongside and on behalf of refugees and displaced persons, to speak out for their right to live full and free lives as God intends.

With a new federal fiscal year comes the beginning of a new resettlement year. Each year the US government sets a goal, or “ceiling,” for how many refugees it intends to resettle over the course of the year. Known as the Presidential Determination, the plan (and the number associated with it) outlines how the US Department of State intends to identify refugees to be resettled and to approve their travel and admission to the U.S. It establishes government budgets, develops staffing plans, and formalizes agreements to carry out the program. It also informs refugee resettlement programs and refugees what to expect about who might be resettled in the coming year. Because of the lengthy and complex process to be approved as a refugee for resettlement, people are standing in a long line—both literally and figuratively—to have their case heard and processed, causing a bottleneck at every stage. According to the State Department there are currently 120,000 refugees on backlogged waiting lists for US resettlement. However, if the US doesn’t resettle the total number of refugees allowed in any given year, that allotment does not roll over and is lost forever.

FY2020 closed out the year on September 30 with the lowest number of refugee arrivals in the history of the US refugee program ever. Fewer than 12,000 individuals arrived out of a 18,000 ceiling. A difference of 6,000 individuals—mothers, fathers, sisters, brothers, grandparents and children—who should be here but aren’t. 6,000 persons. Many of these, including a great number who face considerable risk due to threats of violence or health issues, are waiting to join loved ones already in the US.

And how does our government respond to this failure? After three years of continual decrease, instead of doubling our commitment to those refugees left overseas, the US Administration has informed Congress that it intends to set the FY2021 Presidential Determination at a new low of only 15,000. This will now become the lowest number ever set. In addition, until the Presidential Determination is set, zero refugees can be resettled, further limiting the likelihood of even reaching the lowest of the lowest goal.

Refugee resettlement is part of our country’s recognition that we are part of a worldwide family. When the US signed the 1951 Refugee Convention and passed the 1980 Refugee Law it acknowledged our responsibility as a nation to members of our global community. In passing the 1980 Refugee Act, Congress declared that it is “the historic policy of the United States to respond to the urgent needs of persons subject to persecution in their homelands.” It goes on to state that the purpose of the law “is to provide a permanent and systematic procedure for the admission to this country of refugees of special humanitarian concern to the United States, and to provide comprehensive and uniform provisions for the effective resettlement and absorption of those refugees who were admitted.”

This is the connection. In the sacrament of holy communion, we become one family. And in the act of resettlement, we bring that sacred act into action, taking responsibility for one another as part of one global, interconnected and interdependent family. It is no wonder that refugee resettlement in the US has its roots in the faith communities who continue to be the welcoming hands and feet of Christ in refugee ministries today. And they’ll know we are Christians by our love, by our love . . .

What can you do?

Share what faith leaders—including PCUSA Stated Clerk the Rev. Dr. J. Herbert Nelson II—are saying about the need for the country to do more.

Email your legislator through our action center and tell them you strongly condemn a low admissions goal and call for a robust refugee admissions goal of 95,000 in 2021.

Contact your local resettlement affiliate and let them know that they aren’t alone. Consider how you and your church can be a visible presence in the lives of refugees who are here and offer comfort to those who worry about their family members stranded overseas.

Not sure where to start in connecting with refugees locally?  Drop us an email at PDA@pcusa.org and we’re glad to help you get started!