Changes in the United States’ asylum policies over the past three years have created one barrier after another for bona fide refugees to seek legal protection from persecution here. In June, the Department of Homeland Security posted 161 pages of proposed regulations which many advocates and attorneys say drastically changes established rules and effectively guts asylum in the US. The law requires a 30-day comment period after such a proposal is made public, but it is expected that any announcements about implementation will wait until fall, likely after the election. For asylum and immigrant rights groups the intention could not be more clear: to effectively end the United States’ humanitarian commitment to asylum.

Among other things, at issue is that these sweeping changes don’t allow for adequate consideration of the individual stories of those arriving at the border. Each has made the arduous journey because they are desperate for a life in the US where they and their families can survive and thrive. However, some arrive having experienced especially horrific hardship and heartbreak through threats, violence, and political and religious persecution in their home country as well as in Mexico. If these people are forced to return home, the possibility is great that they will eventually be put to death.

In response to a growing need for support in the twin cities of Nogales, Arizona and Nogales Mexico (collectively known as Ambos Nogales), six Catholic partner groups on either side of the border established the Kino Border Initiative (KBI) in 2009. KBI provides for migrants’ immediate needs—food, clothing, and basic medicines as well as shelter for women with or without accompanied children—while also promoting US-Mexico border and immigration policies that affirm the dignity of the human person and encourage a spirit of binational solidarity. They, and a growing number of ecumenical and interfaith partners, including Presbyterians in both De Cristo and Grand Canyon Presbyteries, are ministering to those who wait and hope for admission to the US.

Because their faith invites them “to discover Christ…among those who suffer from the consequences of the current immigration policies of both the US and Mexico”, KBI has developed a new approach to their involvement in #SaveAsylum, an international advocacy campaign to defend asylum seekers’ legal right to seek refuge in the US. This border-led movement has found a unique way to bear witness: document personal stories, read them aloud from both sides of the border wall, and share them throughout the country, including with those in political power. While these individuals may not be able to cross the border, their stories of persecution can. Intended to happen monthly at Ambos Nogales, KBI’s #SaveAsylum events are broadcast live and videos of past events can be found on their Facebook page. One of the stories shared on August 21 was from a 38-year-old woman from Venezuela who had been in Nogales for eight months.

“I was the director and spokeswoman of a political party and organized protests against the government. My husband was an organizer and directed those efforts because he’s a criminal attorney. When he left, I kept working. They arrested me one day simply for participating in protests.

I assembled 300 people for a march. 50 members of the “collectives” showed up with sticks and pipes. I ran to a church, but they found me and began beating me. While I was at the protest, they went to my house and beat up my children. They knocked out two of my eldest son’s teeth. He had them surgically reconnected, but they became black. They split my 7-year-old son’s head. He still has two scars. That same night, two members of the “collectives” arrived at my house yet again and told me that they would kill me and my children. When I organized another meeting, they threatened me. They asked me where my husband was. A government official followed me and told me “they won’t leave you in peace, so get out of here”. As soon as I could, I sold my pickup truck and we fled Venezuela.

We left everything behind, house, truck. Nonetheless, the government officials keep returning to our house to inquire about us. Two months ago, they went to our house to find us and they destroyed our TV and computer. It’s not possible to exercise our free expression there without suffering harm. All of my family has had no choice but to flee in order to avoid death.

Upon arriving in Mexico, immigration officials kidnapped us in Mexico City. There were 77 Venezuelans kept naked in a very cold room. I protested. The officials said that we were only fleeing because it was popular. They took me to a road under a bridge with my 5-year-old son. They forced me to pay them $5,000 so that they’d let us go. It was the money I had from selling my truck. I’m in constant fear in Mexico, and it’s not possible to find protection. In Hermosillo, the taxi driver stole my suitcase. When I finished collecting a money transfer, I was assaulted and beaten up. And there’s a man stalking me here.

For these reasons I’m seeking asylum in the US. My husband already asked for asylum because he also fled the Maduro regime. It’s not safe here in Mexico. I’m asking for asylum because in the US people follow laws and I know it’s a safe country. That’s why today, we demand that the government of the United States follow its asylum laws and respect our rights as human beings to seek protection.

It is important that this woman’s story—and others like it—are heard by as many people as possible.  Thanks to the former PCUSA moderator, the Rev. John Fife and others in Arizona, we learned about this powerful campaign to make visible what our policies have made invisible – the real people and real lives put at risk by forcing asylum seekers to remain in Mexico.  In keeping with many General Assembly statements and policies in support of U.S. asylum, our stated Clerk, the Rev. Dr. J. Herbert Nelson II, has agreed to share a statement of solidarity from the PC(USA).

The #SaveAsylum coalition encourages churches and organizations along the U.S./Mexico border to create similar events at other entry/deportation points. In addition, they ask anyone who wants to help to contact your Senators and Representatives and ask them to do the following:

Please consider joining KBI’s next #SaveAsylum event on September 21, both at the border and on their website.

Through the involvement of Stanley Feldman—a retired Arizona Supreme Court Chief Justice and the son of immigrants who sought asylum in the US—the testimonials KBI gathers at Ambos Nogales will be added to the asylum testimonial exhibit in the archives of the Holocaust History Center at the Jewish History Museum in Tucson. 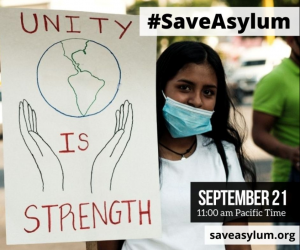