Make A Donation Click Here >
Home › Uncategorized › Join the Poor Peoples Campaign: Here is What you Need to Know

Next Monday, the Poor People’s Campaign: A National Call for Moral Revival will launch a season of nonviolent moral fusion direct action in Washington, DC and across the country, and we need you to join us. In communities across America—Black, white, brown and Native—we have built a Poor People’s Campaign to become what Rev. Dr. Martin Luther King Jr. called “a new and unsettling force in our complacent national life.”

The Poor Peoples Campaign: A National Call for a Moral Revival is uniting tens of thousands of people across the country to challenge the evils of systemic racism, poverty, the war economy and ecological devastation.  Each week of the 40 days of action will have an issue focus.

Check out this map of our events and rallies coming up for actions near you.

On May 14, we will make the demands of the poor and dispossessed known to our failing leaders in Washington, DC by standing together in the US Capitol and at State Houses around the country. Sign up now to join us in nonviolent moral fusion direct action next Monday.

Weekly Themes of 40 Days of Action

WEEK ONE (May 13-19) – SOMEBODY’S HURTING OUR PEOPLE: Children, Women, and People with Disabilities in Poverty

WEEK THREE (May 27-June 2) – THE WAR ECONOMY: Militarism and the Proliferation of Gun Violence

WEEK FOUR (June 3-9) – THE RIGHT TO HEALTH AND A HEALTHY PLANET: Ecological Devastation and Health Care

By engaging in highly publicized, nonviolent moral fusion direct action, the Poor People’s Campaign: A National Call for Moral Revival will force a serious national examination of the enmeshed evils of systemic racism, systemic poverty, ecological devastation, the war economy and our distorted moral narrative. These enmeshed evils know no boundaries. That’s why we need people who care about this nation to build something better. 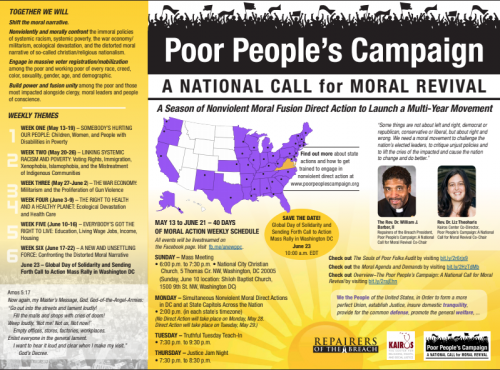