December 4, 2017- Washington, D.C.— Today, on the fiftieth anniversary of the announcement of the first Poor People’s Campaign of 1967-68, a growing and diverse leadership has come together in Washington, D.C., to announce the launch of the Poor People’s Campaign: A National Call for Moral Revival. This broad and deep national moral fusion movement, co-chaired by Rev. Dr. William J. Barber II of Repairers of the Breach and Rev. Dr. Liz Theoharis of the Kairos Center, is rooted in the leadership of the poor and dispossessed as moral agents, reflecting the great moral 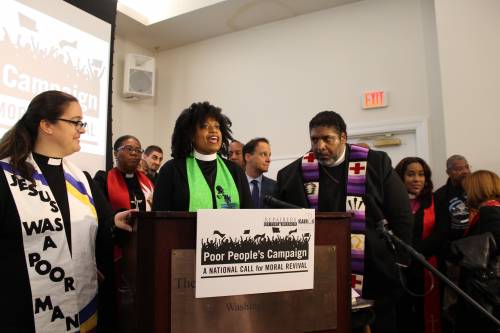 teachings of our deepest religious and constitutional traditions.

The Presbyterian Church (U.S.A.) is excited to announce our full participation in the campaign—from our grassroots to our highest levels of leadership. This campaign represents part of our longstanding work to be in solidarity with poor and working class people, and builds on, most recently, our commitment from the 222nd General Assembly to:

Encourage congregations, mid-council governing bodies and national agencies of the PC(USA) to locate ourselves with the poor, to advocate with all of our voice for the poor, and to seek opportunities to take risks for and with the poor. (Overture on Choosing to be A Church Committed to the Gospel of Matthew 25)

At the launch this morning, Rev. Denise Anderson, Co-Moderator of the 222nd General Assembly, spoke of the need to respond to the profound crisis of these times by building a nationwide multi-racial movement calling for dramatic steps to address the evils of racism, poverty, the war economy and environmental destruction. With the Poor People’s Campaign, we are mobilizing toward 40 days of massive, coordinated, nonviolent direct action across the country this spring. (Pledge to join the Campaign here!)

The groundwork is well underway: over the past months, organizers of the Poor People’s Campaign met with leaders from 37 states, working with them to set up State Coordinating Committees. The diverse leadership of these committees represent families living in extreme poverty, DACA students and their families who make up some of the 11 million undocumented immigrants in this country, mothers without health care, workers Fighting for $15 Minimum wage, and other moral leaders. This spring, these state teams will organize 1,000 people in each state to engage in nonviolent civil disobedience around a platform that addresses poverty, systemic racism, ecological devastation, the war economy, and our national morality. The campaign will simultaneously launch in Washington, D.C., with 40 Days of Moral Action from May 13 until June 21: educational workshops, cultural celebrations, protest, and massive civil disobedience.

The Office of Public Witness calls all Presbyterians who see that this is a time for a moral revival in the heart and soul of our democracy. We are preparing ourselves for a season of nonviolent civil disobedience and moral activism. The doors to the movement are open!

Click HERE to make a pledge to join the campaign. Email OPW Representative for Domestic Policy Nora Leccese (nora.leccese@pcusa.org) if you are interested in joining your state organizing committee.