A letter from Alan and Ellen Smith, serving Russia and Belarus, based in Germany

We are coming upon a significant event. November 7, 2017 will mark the 100th anniversary of the October Revolution, when the Bolsheviks, led by Vladimir Lenin, seized power in Russia. Perhaps it is not a day to celebrate, but it is an event to remember. The tumult in Russia had already begun before this date, but the October Revolution was a turning point that plunged Russia into something new and often horrific. I would argue that we should view contemporary events in Russia through the lens of the last 100 years. The people of Russia have lived through a traumatic century. In the midst of their trauma, those that held the faith were strengthened by their faith and the community of believers. Many, in times of terror, abandoned their faith. Today the churches of Russia work to reconnect their neighbors with the Christian roots of the society.

We talk about the trauma that the Middle East endures today. Trauma does not quickly dissipate after the traumatic events pass. The legacy of trauma unhealed can be generational. Thus, the people of Russia continue to suffer from the effects of 70-plus years of historical trauma, even though there are relatively few who have personal memories of the horrors of the Revolution, the civil war that followed, the forced collectivization of agriculture, the purges and repressions of the 1930’s, or World War II. It is not to be expected that the cumulative effects of three generations of communist rule can be eradicated in a single generation.

When we began our service in Russia in 2001, I think we all (Russian and American partners) were focusing on how our accompaniment could help the Russian churches as they worked to rebuild their churches, develop educational programs for pastors, lay leaders and Sunday school, and develop desperately needed social ministry, things forbidden during Soviet times. In this accompaniment, though, we discovered that we were being blessed by the profound witness of a church that has experienced persecution and isolation, yet survived; most Americans have no experience of what it means to be persecuted for one’s faith.

The partnership program we coordinate has now been in place for more than 20 years. Although the relationships which have been forged are deep and sound, in these unsettled times, when the U.S. and Russia are divided by various political issues, we have heard people question whether they should travel to Russia, or invite their Russian partners to the US. Not everyone by any means, but these are strange questions we hear. For us, it seems more important than ever to come together, “making every effort to maintain the unity of the Spirit in the bond of peace. …” 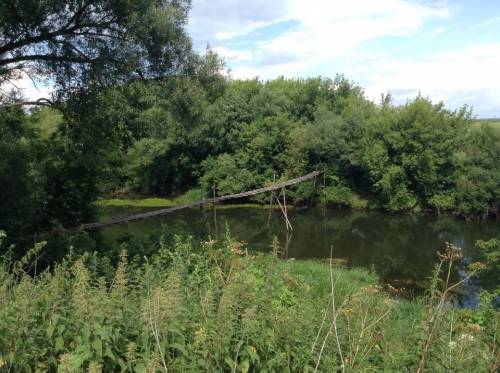 Some bridges are scarier than others, but if Christ is the bridge, He is enough. We can trust the bridge regardless of appearances.

As we have traveled, we have talked about bridges. Bridges serve an important purpose in our lives. They connect places and the people who live in them. Whether we are willing to cross any given bridge and be connected depends on our perspective. While traveling through the hills of southwest Pennsylvania with a pastor friend of mine, we discussed the challenges of topography where it can take several bridges and many extra miles to traverse a relatively short distance “as the crow flies.” My friend shared that sometimes it affects people’s mindset. If the journey takes too many bridges and too many miles, maybe it’s not worth going.

A friend visiting Russia took the picture below of a foot bridge near one of the camps we’ve worked in for years. She had stood on the bank of this river wondering whether the bridge was safe to cross, whether the people in the community on the other side were friendly, whether having made it across she would be able to get back again.

Make no mistake. We are not the bridge. Jesus Christ is the bridge. Our perspective about the bridge will determine whether we are willing to cross it. We need one another. These are unsettling times. People everywhere are anxious and afraid. Let us not let our fear isolate ourselves or our brothers and sisters in Christ on the far side of the globe, but let us use the bridge to connect and reflect on who we are as the Body of Christ. We can assure you that Russia is safe to visit, and our partners invite you.

With love in Christ,
Ellen & Al