A letter from Leslie Vogel serving in Guatemala

Individuals:  Give online to E200483 for Leslie Vogel’s sending and support

Congregations: Give to D507562 for Leslie Vogel’s sending and support

Husband:   “I have wonderful news!  You know that I’ve been unemployed for six months now.  My family is loaning me the money so I can travel to the U.S. and find work there.  I want you to come with me.  My mother can take care of our son. Come with me!  Together we’ll find work and then send for him!

The six Guatemalan women before us are enacting a drama they have created to tell a migration story.  One of the women plays the part of the husband and father. 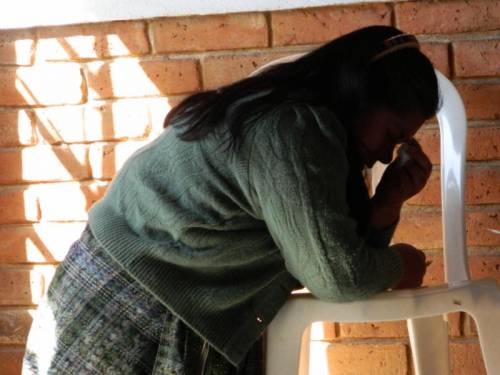 As the performance continues, the father calls from the U.S. on Gonzalo’s sixth birthday, again urging Gonzalo’s mother, “Juana,” to go and join him.  “My mother can care for Gonzalo.  We can send for him once we are more settled,” he insists.  When she again refuses, he threatens:  “If you’re not going to come and join me here, then you can forget about us!”

Gonzalo and his mother weep.

We, the moist-eyed audience, were 12 members and 3 facilitators of the “Voices from the Border and Beyond” delegation, sponsored by Presbyterian World Mission. We were pastors, elders, deacons, and theological seminary students—all U.S. citizens except for a student from Ethiopia. Some were fluent in Spanish and others were setting foot in Central America for the first time.

Traveling in a sort of “reverse migration route,” we began in the United States, gathering first at Southside Presbyterian Church in Tucson, Ariz., where we heard about the historic Sanctuary Movement from the 1980s and also about the current New Sanctuary Movement.

We then traveled to Douglas/Agua Prieta on the U.S./Mexico border, where we were hosted by one of Presbyterian World Mission’s global partners, Frontera de Cristo, a Presbyterian Border Region Outreach (PBRO) site. We visited the border fence, a U.S. Border Patrol station, plus a resource center and a shelter for migrants who have been deported back to Mexico. We had then traveled partially by land and mostly by plane to southern Mexico, visiting more migrant shelters and crossing the bridge on foot into Guatemala, where we were hosted by our church partner, CEDEPCA’s Intercultural Encounters Program.

We were now at a retreat center in Quetzaltenango (or Xela) in the highlands of Guatemala, listening to migration stories from Guatemalans. The skit unfolding before us was a true story, prepared and enacted by women of the Faith Stories Project, or Historias de Fe.

Following this presentation, we were able to engage with the women in dialogue about the multiple issues brought up by the drama.  From there we went on to the capital and finally to El Salvador to continue meeting with government and non-governmental agencies that address different aspects of migration, and to reflect biblically and theologically on what we had seen and heard.

Some things I learned from the journey:

Migration, the act of moving from one place to another in search of a better life or even just for survival itself, is a natural part of the human condition.

Migration in and of itself is not a “problem.”  Migration is a reality of the lives of virtually everyone in the world, beginning with Adam and Eve and including Abraham and Sarah, Ruth and Naomi, and even Jesus of Nazareth and his parents, Mary and Joseph.

…when migration is dehumanized: when people are treated as numbers or objects (or even “bodies”) rather than as human beings

…when migration is forced: when people are forced to migrate (due to violence, social upheaval, drought, famine, absence of economic opportunities, absence of means for putting food on table)

…when laws designed to keep people out end up keeping people in  (For example, many migrant laborers in the U.S. used to return regularly to visit their families in their countries of origin, but re-entry has become so dangerous and difficult, they are forced to remain permanently in the U.S.  Therefore some eventually send for the rest of their families, creating even greater migration northward.)

Reasons for migration are multiple, often similar, and yet unique to each person’s story. People migrate: 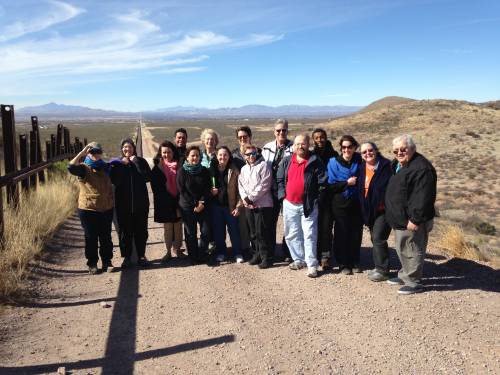 The Voices from the Border and Beyond group at the U.S. Border Patrol fence in Douglas, Arizona/Agua Prieta, Mexico

The effects on individuals, families and societies are as complex as the factors pushing and pulling people to migrate. Migration for any reason, whether out of economic necessity or fear for one’s life, often leads to family disintegration, with children being raised by single mothers, by grandparents, by aunts and uncles, or by no one in particular. The children’s sense of loss and abandonment makes them easy prey for gangs and organized crime, as well as for human smugglers promising to reunite them with parents in the U.S.

The so-called “Free Trade” agreements by the U.S. with developing countries cause local markets to be flooded with imported U.S. products that put local farmers out of business, drive them from their land, and make it impossible for them to feed their families.  U.S. policies prohibit undocumented entry into the U.S. and employment of workers who do not have proper work authorization.  Yet many employers in the U.S. benefit from undocumented laborers because they can pay exploitive wages and provide oppressive working conditions; they know that workers won’t speak out for fear of deportation or being replaced by others eager for a job. The workers are frequently arrested and deported; employers of those workers are rarely sanctioned.

Gonzalo’s father (Juana’s husband) originally migrated to find work to support his family, but also under pressure from his family and culture.  However, he left behind a gaping hole in Gonzalo’s heart. Gonzalo grew up with a single mother who was always working to support him and herself. Because he was often unsupervised in his childhood and adolescence, he eventually dropped out of school and found himself a “job” driving for a drug trafficker.  This was a wake-up call for his mother, who worked hard to help him get out of that situation.  His story has a “happy” outcome primarily because of a miracle: The drug traffickers were arrested and sent to prison. Otherwise, 99 percent of the time, the only way out is death.

Gonzalo and Juana’s story is only one of many, many stories we heard during our journey.  We discussed with the Faith Stories women some elements we saw in the dramatization: a male-dominated culture in which a man’s first loyalties are to his family of origin (especially his mother) rather than his wife and children; a teenager who, out of longing for the love, acceptance and companionship of an absent father, makes unwise and even dangerous choices; three of the six Faith Stories women never intended to be single parents, yet they were abandoned when their spouses migrated and eventually established new families in the U.S.

Out of concern, we asked about Gonzalo’s outcome.  He was 19 years old when this story took place. How old is he now? How and where is he now?  Juana Herlinda, who had played the role of Gonzalo’s mother, then revealed to us that this true story is her story.  She told us that Gonzalo, now 22, is free of the drug traffickers for whom he worked, and that he is now an active leader of the church youth on a regional level in Guatemala. While his future looks more hopeful, he continues to long to be reunited with his father.

I leave you with a challenge and an invitation. I challenge you to continue studying and learning about migration issues.

I invite you to prayerfully seek to see migrant women, children, teens, and men as persons, as the human beings and children of God that they are.  I invite you to continue to journey with me to see where and how God is at work in the lives of Central Americans; journey with me through your studies, your prayers and your financial support. Without your financial support, I would not and will not be able to continue to accompany Central Americans, nor will I be able to continue sharing stories like Juan Herlinda’s and Gonzalo’s.

Finally, I thank you for your prayerful consideration of and response to this challenge and invitation. My appreciation goes also to those of you who are already engaging in prayer, correspondence and financial commitments to my sending and support.