A letter from Leslie Vogel serving in Guatemala

Individuals:  Give online to E200483 for Leslie Vogel’s sending and support

Congregations: Give to D507562 for Leslie Vogel’s sending and support

It was early in 2014 and a sizeable contingent of our audience was running late. The Guatemalan speaker on the topic, “Mining Issues in Guatemala,” was more than punctual. As the liaison and facilitator for this particular meeting, I was anxious. Thinking from my own cultural perspective that “time is money,” and aware both that our guest speaker’s organization sometimes charges US$250 per two-hour session and that he was essentially donating his time to us as a favor to a mutual friend, I was even more anxious. 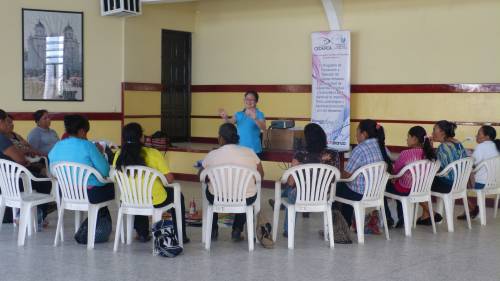 Nevertheless, our speaker, Dr. Yuri Giovanni Melini, medical doctor by training and an internationally known environmental lawyer, was calm and gracious. While he waited, he asked interested questions about the Protestant Center for Pastoral Studies in Central America (CEDEPCA), which is Presbyterian World Mission’s global partner with which I minister and an organization he was visiting and meeting for the first time.  By the time our audience was seated, Dr. Melini had been introduced to the coordinators of CEDEPCA’s four programs: Biblical-Theological Education, Women’s Ministry, Disaster Ministry, and Intercultural Encounters. Somewhere between those first awkward, anxious moments for me and the end of his presentation, in which he had described the trauma experienced by the individuals and communities resisting chemical mining of metals, an important connection was made. Somewhere in all of that, a light bulb came on, mutually, for CEDEPCA’s Disaster Ministry team, for others in CEDEPCA, and for Dr. Melini, then Director of CALAS, the Center for Environmental and Social Legal Action of Guatemala.

Connection: If CEDEPCA’s Disaster Ministry can provide “psychosocial” (spiritual and emotional) care and training in techniques that help people recover from crisis and trauma caused by natural disasters, couldn’t they provide the same type of care and training for leaders who have experienced crisis and trauma in their efforts to protect their communities from environmentally destructive projects?

A new collaborative effort was born that day.

CEDEPCA’s Disaster Ministry team subsequently met with CALAS staff to identify a pilot community and to plan the initial workshop sessions. Two PC(USA) mission co-workers helped draft and translate into English a small proposal requesting funding to cover the costs of travel, meals and materials to hold the workshops. We shared the proposal with the Presbytery of the Peaks, which has been in partnership with CEDEPCA for nearly 30 years; we knew that some of their members have identified with mining issues in Guatemala because of mining in their home state of Virginia. The proposal was further developed by the Presbyteries of the Peaks and the James, incorporated into a larger proposal, and submitted to the Synod of Mid-Atlantic. Shortly after the Synod’s approval, CEDEPCA received the funds.  In August 2014 the workshops began with 15 women from five communities in and around San Rafael las Flores, site of the El Escobalsilver mine operated by Tahoe Resources.

In February 2015, when representatives from the Presbyteries of the Peaks and the James visited Guatemala with CEDEPCA, I had the opportunity to travel with them.  We all experienced the honor of meeting and listening to each of the 15 courageous women who had participated in the Resilience and Life Project workshops and who continue working to resist chemical mining of metals in their communities, despite much suffering, multiple threats to themselves and their families, arrests, even death. Here is one of multiple testimonies from these valiant women:

I, Celeste Gutiérrez Palma, live in Nueva Santa Rosa.  I like to enjoy the gift of nature that God has given us. As a community leader and human rights promoter, I participate in groups that defend and protect nature. I inform people and raise their awareness about the negative effects caused by mining.

Because I am a community leader and I inform the people about the effects of the mining, I have suffered persecution, defamation, and death threats. Sometimes I have been terrified to leave my house. I have been worried, nervous, and sometimes I awaken startled and frightened.

When I received the Psychosocial and Spiritual Care training with CEDEPCA, I was struck by the topics of Emotions, Crisis, Self-esteem, and Resilience, because I related them to what I have lived through while defending our territory.  I am working on negative emotions; I use the breathing techniques and emotional freedom to reduce my anxiety and free me from fears and anguish; I am practicing my self-care plan; and I am working to achieve my goals.

I am sharing the knowledge I am gaining with my women friends, with my neighbors, and in other groups in the community. 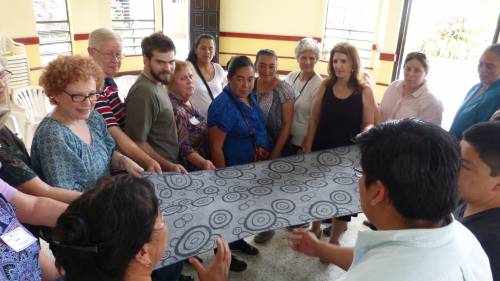 Celeste described to the visitors how, in one meeting where a particularly aggressive, belligerent man was blocking progress in the conversation, she remembered her training from the workshops.  She stepped outside the meeting room and, alone, began breathing in deeply through her nose, exhaling slowly through her mouth, at least 15 times. As she described this, she invited each of us to practice this breathing exercise, at that very moment. She then told us that once she felt she had calmed herself, she returned to the meeting and was able, in a calm, clear, assertive way, to challenge the man and address the problematic issues successfully.

We, the U.S. visitors, experienced the power and calming effect of the breathing exercise—and were inspired by Celeste’s testimony. We exchanged looks and whispers, thinking about the many times we are in church, presbytery, work, or community meetings and it would be wise to draw on such calming techniques.

Engaging in God’s mission, in its best moments, involves opportunities such as this one. In some small way, despite my anxiety and lack of breathing techniques, I was able to play a role of catalyst to help different elements in the equation connect with one another. I have also been privileged to witness some of the tremendous fruits that have grown and will continue to grow, with God’s help, out of those connections.  I ask you to pray for courageous women and men throughout Guatemala who are struggling to keep their communities and environments safe for their families and future generations.  Pray for the CEDEPCA and CALAS teams as they continue to accompany these communities.

I invite you to continue walking with me as partners in God’s mission, making connections between our own realities and those in Guatemala, supporting struggles for more healthy and abundant life for all people.  I am grateful for your participation through your learning, prayers, local engagement, and contributions to the sending and support of mission workers like me and our mission partners like CEDEPCA around the world. ¡Mil gracias!