A Letter from Dennis and Maribel Smith, based in Argentina, serving as regional liaison for South America

From June 27 to July 3, I visited the Presbyterian Church of Venezuela (IPV). I flew into Caracas and then drove with local church leaders to their annual synod meeting in Barquisimeto. Afterwards, I flew to Maracaibo for a brief visit to churches there. Here are some vignettes from my visit —

“As we arrived at church one Sunday morning, a church member shared that a neighbor had died the previous night. I suggested that we visit the family to express our condolences and pray with them. When we arrived, the wake had already finished, and people had left for the cemetery. But some family members had stayed behind. As we entered the house one of the family members said: ‘I just knew that somebody from your church would be coming to pray with us! Thank you so much for coming!’

“I had never understood that people were just waiting for us to reach out to them! We have now visited a total of 66 homes in our neighborhood, sharing a word of prayer and solidarity in each one.”

One result of reaching out has been the creation of a vibrant ministry to children in the neighborhood. Before, only about five kids attended Sunday School. Now there are more than 50!

As with most Protestant churches, Presbyterian congregations in Venezuela include some folks who live nearby and others who travel a considerable distance to church because of their preference for that faith community.

As transportation becomes more difficult in Maracaibo due to lack of public transport and a shortage of gasoline, some congregations are moving toward a parish model — focusing their pastoral outreach on the immediate neighborhood around the church. 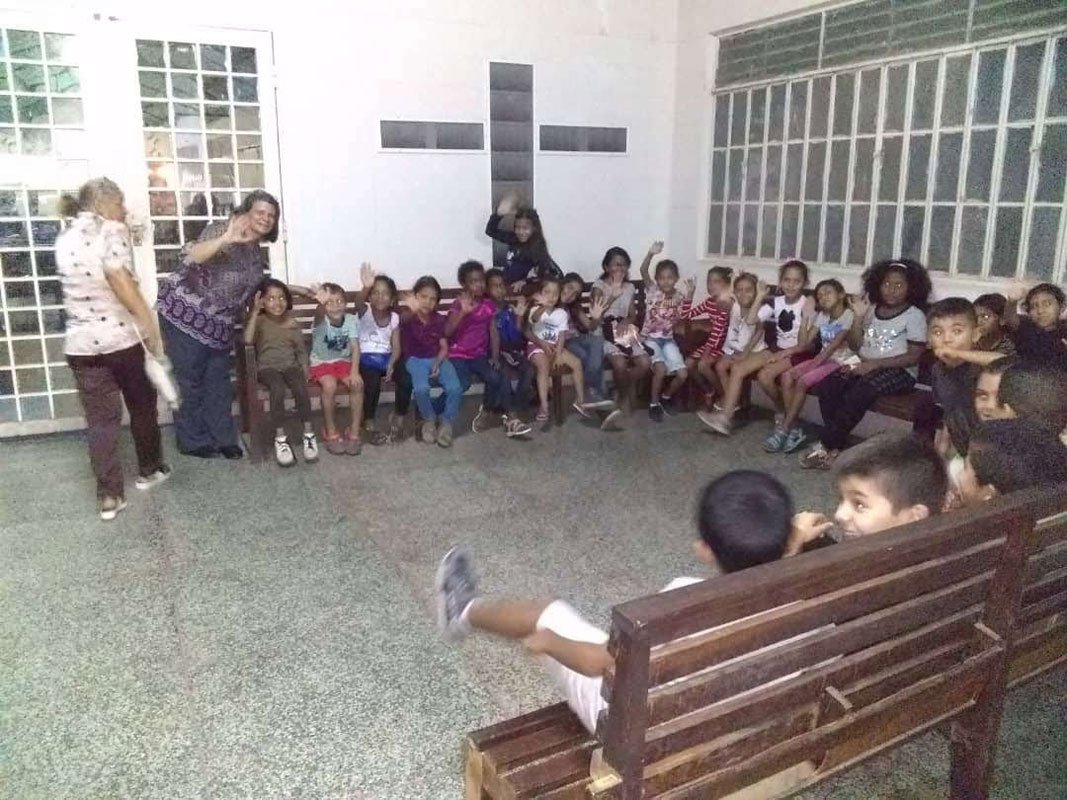 Image 1 of 3
At First Presbyterian in Maracaibo, this change has been led by Rev. Obed Vizcaino. As I talked with Obed about his parish, we noted that the “voluntary association” model — where many travel considerable distances to go to church — has elements in common with our consumer society. When we move to a new community, we shop for a church just like we shop for consumer goods. Under the parish model, pastors come and go, but the ongoing challenge is to serve the immediate neighborhood in the name of Jesus.
One difficulty churches in Venezuela face is ongoing emigration. Reflecting the larger Venezuela experience, at least 10% of church members have moved to other Latin American countries, Europe or the U.S. This trend shows no sign of abating. Those who leave are often younger professionals who have important leadership roles in the church. Since most congregations are relatively small, to lose key leaders to emigration can be challenging.

As we discussed this problem, I suggested that they might want to introduce a “shadow” system so that each elected church leader is assigned a person whom they can mentor in their area of leadership in case they emigrate. We’ll see if this idea proves to be useful.

As Presbyterians, we value an educated clergy.

José Luis Lozano is a ruling elder at Nazareth Presbyterian Church in Cúpira. At the synod meeting, he shared how proud he is to have Rev. Zaida Lara as his pastor. Most of the pastors in Cúpira, he noted, have more enthusiasm than training. But not Zaida. She is a trained and experienced minister! He shared the story of a recent funeral at their church. Because of her experience, Zaida was able to lead a grieving congregation through a Reformed order of worship, and the other pastors in attendance were surprised by the impact and simple dignity of the service.

As we drove to the synod meeting in Barquisimeto, a young man approached our van carrying a small bag of avocados. He asked us if we had any rice or other food that we might like to exchange for them. As inflation continues and cash is scarce, more and more people in Venezuela barter for basic goods.

People I talked to recognized that the economy is a shambles, infrastructure is crumbling, and corruption is rampant. The public health system is in crisis and medicines are in short supply. Yet even those who oppose the current government insisted that these grave problems are only exacerbated by the economic sanctions and aggressive rhetoric of the U.S.

Everyone I talked to agreed that military intervention would be a disaster for all involved. A negotiated settlement between the government and the opposition is the only way forward.

One effect of the economic crisis has been increased hunger, especially among children and the elderly. The Presbyterian Church of Venezuela (IPV) has been able to use funds received from supporting PC(USA) congregations to set up soup kitchens and distribute basic food baskets to vulnerable members of the community. Other congregations have provided scholarships to help poor students attend IPV-related schools.

The Venezuela Mission Network has been an important space for congregations in Venezuela and the U.S. to keep in touch with one another. Let me know if you would like to participate!

Local IPV congregations also serve as community centers where people can share useful skills. Nilmarys Crespo has been leading a sewing class at Divino Salvador Presbyterian Church in Barquisimeto. She was surprised one day to find that one of her students who had no sewing machine had completed her project having stitched the entire garment by hand!

One thing is clear to me after visits to partner churches in Venezuela, Colombia and Brazil this year — as well as a recent visit to Honduras, El Salvador and Guatemala as staff to a PC(USA) task force on Central America: living in a time of conflict and polarization wears you down. One elder in Venezuela spoke of the weight of isolation. So many friends and colleagues have left; all the routines of daily life are now so much more difficult.

The challenge we face is to cultivate a spirituality of resistance. A spirituality that nourishes hope and leads us to embrace one another with tenderness, even in polarized times. This is the way of Jesus. Pray for our sisters and brothers in Latin America. And know that they are praying for you.