Building a Life of Faith. Support the Pentecost Offering.
Make A Donation Click Here >
Home › What We Do › Where We Work › Co-workers › The One Voice

Blessed New Year to you all. There is something gracious and hopeful about a new year. It is a fresh start of a sort. Even though we return to our same jobs and responsibilities, there is a different feel to the same situation that holds hope.

This was graphically displayed last week as I sat on my porch at 7 a.m. with the rain pouring off the roof. It has been raining off and on for four days, a most unusual event here in Rwanda. Usually in the rainy season, the rains build during the day and in late afternoon or early evening, they come, usually only for an hour or two, even if they are heavy at first. The end of December should be the end of the rains, with only short, occasional showers, as the dry season approaches. But that has not been the case this year. The rains have continued heavily throughout December. The last Sunday of Advent the rain began about 3 a.m. and by 8, when we were gathering for worship, it was coming down in torrents. People do not brave going out in the heavy rains. They are smart enough to wait them out, if possible. I did not wait. I was responsible for the service, so I forged through the downpour, and was soaked by the time I reached the chapel, just a block away. Only seven of us gathered for worship as the rain pounded the windows and roof and seeped through to puddle on the floor. I trudged home through the rain at the end of the service, sharing my umbrella with two others. Only in the late afternoon did it let up for a time but, about midnight, it began again in earnest. 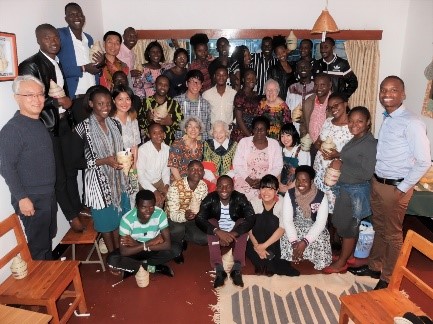 Christmas Eve we were able to attend the service without the escort of rain. Christmas Day it threatened all day and at 4, just as my dinner guests were arriving, the rain began again. Folks moved fast to beat the deluge. Thirty-eight diners from 13 different countries gathered to celebrate. What fun to share together the joy of Emmanuel’s coming. They tarried long after the meal, waiting for the rain to let up a bit. We were blessed that there was no water damage in Huye, but in Kigali, the capital, seven people were swept away in the flooding and many houses were damaged as rainwater poured down the hills and around the homes built on the hillsides. So, on the 26th, I sat and watched and listened. Then I heard something that surprised me – the song of a lone bird. Many birds nest in the trees in my yard and sing me awake every morning, unless it is raining. These birds do not sing until the rain stops. In fact, that is how I know when the rains are over: the birds sing. But this morning, in the downpour, one long song rang out. There, in the midst of the storm, a voice of hope rang out. The rain did not stop for several hours, but the song and the hope continued in my mind. Since then, the rains have begun to taper off.

My New Year’s prayer for you is that you hear the song of life and hope as a harbinger for this new year. Whatever it may hold, God’s song of love is there with us. I am looking forward to being with many of you this spring when I return for three months. I look forward to visiting with you in your churches and in some of the presbyteries. I want to share the song of hope from Rwanda with you. Blessed New Year.

Kay (Cathie to the family)