Share God’s love with our neighbors-in-need around the world through One Great Hour of Sharing.
Make A Donation Click Here >
Home › What We Do › Where We Work › Co-workers › A Story of Dedication and Sacrificial Giving

She is called “Fefita,” this diminutive, fireball of a woman in her 80s. Born in Cuba, she grew up in a poor family in the 1930s and ’40s. But as a child of 6 young Fefita met a Christian missionary who told her that God had special plans for her. Throughout her adolescence she was embraced and nurtured by a group of Presbyterian Women in the local Presbyterian Church. This early connection to the Presbyterian Church began a lifelong journey for Fefita. In her early 20s she was commissioned along with two other young women as an “evangelist” of the Presbyterian Church of Cuba. Sixty years ago Fefita began a Presbyterian Mission Center on the outskirts of Havana, where she served the local poor community, befriended children and families, led Bible studies and children’s groups, and generally showed the light of Christ through her life and witness.

You may not know that the Presbyterian-Reformed Church in Cuba was part of the Synod of New Jersey before the Cuban Revolution in 1959. The ministers, teachers in the Presbyterian schools, and, yes, evangelists were employees of the U.S. church and part of its pension plan. But after the revolution those pension funds were frozen as part of the U.S. embargo of Cuba. For forty years—long after these colleagues in ministry had reached retirement age—those funds were unavailable to them or to their descendants, creating great hardship for those families.

As part of the PC(USA)’s advocacy on behalf of the Cuban church and people, we helped to bring a delegation from the Cuban Council of Churches to Washington, D.C., a few years ago. During meetings with congressional and administration leaders, Cuban Presbyterian representatives discussed these frozen pension funds and the hardship forced on these aging servants of the church and their families. A member of Westminster Presbyterian Church in Minneapolis became a tireless advocate for these Cuban colleagues. A breakthrough was finally negotiated—after all these years—and the funds were finally sent from our Board of Pensions to these former employees, their widows or families. 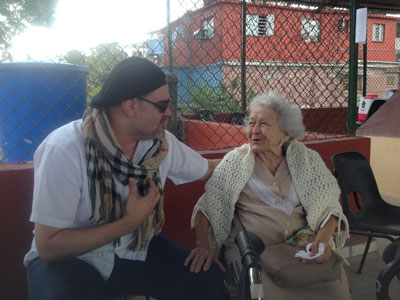 Fefita was one of those who had been waiting for many years for her pension. She had never married, was already in her 80s, and living with a niece. But Fefita had a dream, a dream that began 60 years ago with that Presbyterian Mission Center in a poor barrio outside Havana. The city has grown up around this neighborhood, but it remains a poor area with many needs. Rev. Padin had begun a Presbyterian church there from the seeds planted by the Mission Center, and Fefita is one of its most enthusiastic members! The congregation met in a tiny building that held, perhaps, 30 people, with 3-person pews, so narrow was the sanctuary. But when Fefita received the accumulated funds from her long-delayed pension she donated a substantial amount to her church to purchase and remodel a larger building for worship, Sunday school and community activities. This donation is a lot of money in Cuba, where the average salary for professionals—doctors and lawyers—is $200 per month. Ministers generally are paid $20–$30 per month.

But Fefita’s dream and her commitment to her neighbors, demonstrated so long ago, became a reality. Not only is the larger space fully used all week, but the congregation also decided that it was not right that the church should look so nice while the neighboring houses went unpainted. So they donated part of the paint and sent volunteers from their congregation to ask neighbors if they would like their houses painted too. And that’s what they did. Neighbor to neighbor, improving not only the appearance of the neighborhood, but lifting the spirits of the people who lived there. What a testimony to the God of love who desires abundant life for each of us! Others in that neighborhood began to wonder what it was about this group of Presbyterians and this God they worshipped that would cause them to act in such a generous and loving way. So the congregation is growing and Fefita is still there each Sunday. She has trouble getting around, but her face shines with love and excitement as she talks about this neighborhood where the church sent her all those years ago to show the love of Christ.

Many are the stories of dedication, of faithful service, of sacrificial giving of self and resources that we hear from the Presbyterian-Reformed Church in Cuba. Many are the lessons we can learn from their experience of being a minority in what was for many years an environment hostile to Christians or religion in general. 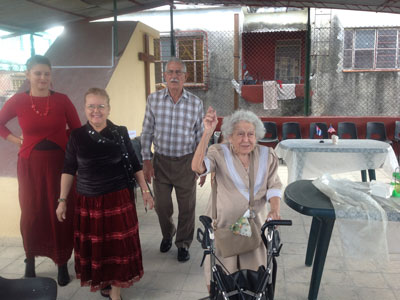 As our two countries continue on a journey of reconciliation, may we hear their stories and learn what they can teach us about what it means to be followers of Christ in whatever circumstances we find ourselves, even as our own church and churches in general lose influence and voice in U.S. society. As our churches have continued in relationship despite all these years of government estrangement, may our church and our Cuban partner continue to show the way toward real friendship and deep relationship.

The PC(USA) General Assembly this year reaffirmed our support for the Cuban church and people, our strong opposition to the U.S. embargo and other measures that restrict our connections and collaboration with the Cuban people. We give thanks that so many obstacles are slowly being dismantled. We still have work to do—some hard advocacy work—but also a joyful labor of love as we get to know these neighbors to the south.

Your support of my ministry enables me to continue to walk alongside our Cuban and other Caribbean partners as well as to encourage and assist other PC(USA) mission co-workers who join me in accompanying our Caribbean partners. Thank you for your prayers and for your generous financial support. In 2015, for the first time, my sending and support was fully funded for the year. I shall appreciate your continued support in 2016 and your participation in efforts of reconciliation with our Cuban and other Caribbean brothers and sisters. Together we can follow the example of Fefita: joyous, cheerful giving of self and resources for the sake of God’s kingdom.