A letter from Al Smith serving in Germany/Russia

Summertime is camp time for the Smith family.  Emma and I have recently returned from four weeks in Russia, mostly devoted to various camps.

We arrived in Moscow on June 29. Emma stayed there to await the arrival of the annual team from MacPherson Presbyterian Church in Fayetteville, North Carolina, which is our home church. There has been a MacPherson team in Russia every year since 1998 when the partnership began, helping in the children’s camp of their partner church, Transfiguration Baptist Church of Oryol. Emma has been in this camp every year since she was 4 years old, and she was anxious to be there this year before heading off to university in mid-August. 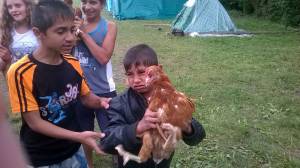 While Emma waited in Moscow, I headed south to Kursk for the annual Roma children’s camp put on by Pastor Andrey Beskorovainiy and the congregation of the Devlesko Lav church. This camp has been one of the highlights of my summers for the past five years, but I never know quite what to expect. Last year we were challenged by repeated thunderstorms, and it seemed like I spent much of my time towing a canoe full of visitors across the swollen creek that separates the campsite from the dirt roads that lead out to the main highway.   I guess that is one of the downsides of being tall. The only vehicle that could safely cross was a military-surplus all-wheel drive truck—everybody else stalled out. This year’s weather, after one day of rain at the beginning, was essentially perfect, resulting in kids who stayed warm and dry, at least at night. The river was, predictably, chilly, as rivers in Russia ought to be, so swimming breaks were frequent, but short. 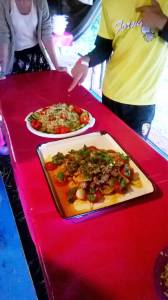 I am continually amazed at the ability of Andrey and his team to put together a camp program, from scratch, that varies from year to year while covering all the bases: Bible lessons, music, games and crafts. We know that some camps use ready-made program materials supplied by various organizations, but the Kursk church is not able to afford that convenience. I knew we were going to have an interesting afternoon when, sitting in Andrey’s car during a grocery run, I was suddenly presented with a cardboard box containing four live chickens. It seems the lesson for the day was God’s provision for all of our human needs, including, naturally enough, food. In the fullness of time, of course, we could have enjoyed fresh eggs, but the plan was for something more immediate, a contest to see which of four teams could come up with the most appetizing chicken dinner. After a certain amount of predictable chaos, as children rounded up chickens and other administrative details, involving a hatchet, were attended to, four varied dishes were presented. As one of the judges, I got to try them all, and can testify that everything was absolutely fresh. In some ways, it seems like a strange lesson for children in a Bible camp, but in the context of Roma life in Russia it was perfectly valid.

We ate a lot more chicken than usual this year, even if most of it arrived in a more conventional manner. As a result of the economic sanctions and counter-sanctions surrounding the conflict in Ukraine, there has been considerable inflation, including painful increases in the price of food. A can of stewed pork that cost 80 rubles last summer was over 150 rubles this summer. The effect of this inflation is obvious when we consider the cost of feeding 60 or 70 people at a time, but it also affects families. Prices are up, but incomes are down, and many families are being squeezed, particularly if they have outstanding loans to pay. Regardless of the rights or wrongs of the Ukraine conflict, the people of Russia are caught in a difficult situation and need our prayers, as do the people of Ukraine.

Andrey’s summer does not let up once the camp is over. For one thing, it’s usually hay-cutting time immediately after the camp, and that generally involves a week or two of high-intensity work with a scythe, rakes, and a horse-drawn wagon to get the hay cut, dried, and safely in the hayrack for use during the winter. Having tried it once, a year or two ago, I can safely say it is harder than it looks. Additionally, since the end of the camp Andrey has completed three evangelization trips to Roma communities that have asked for his support. When he goes on these trips he generally takes a praise team with him, not only for the music but to help with counseling and witness. Each trip requires a sacrifice of time on the part of the team, as well as money for travel.

Come November, it will be time again for the Roma leadership conference, where those involved in leading the various Roma groups around the country gather for mutual support, encouragement, and exchange of ideas. For the first time in many years I will not be present for the conference, since we will be back in the States on interpretation assignment. Ellen, however, who has to be in Russia with other groups, is planning to be there. Andrey is also considering the possibility of a youth conference, to bring Roma young people together, but that idea is still in the discussion phase for the time being. Another possibility for the future is inviting young adults from the States to come to the summer camp. There is a particular need for male and female swimming instructors since many Roma kids, especially girls, do not know how to swim. If you know of someone who would be interested in this, please let us know.

Our ministry in Russia is always in need of your support, both spiritual and material.  We are very grateful for your prayers for us and for our colleagues in Russia. In the current state of things, both in the world in general and within our denomination, there is a constant need for financial support as well, not only for specific programs but also for the cost of sending mission families out and maintaining them on the field. If you are already contributing to our support, thank you. If not, please consider doing so.  The PC(USA)’s ability to continue its tradition of mission service depends on the support of churches and individuals.

May God bless all of your endeavors.