Building a Life of Faith. Support the Pentecost Offering.
Make A Donation Click Here >
Home › What We Do › Where We Work › Co-workers › New Church Partners

A letter from Ellen Smith serving in Germany/Russia

For those of you who have not run off to find a map and locate this city, let me add that this is a small and ancient city (850 years old, like Moscow), in the Smolensk oblast on the western edge of Russia, bordering Belarus. Unlike Moscow, it is a city that has survived the centuries but somehow failed to grow significantly. The city, situated on the banks of the Dnepr River (not far from the Dnepr’s source), was at one time ruled by a prince and had a kremlin (fortified central complex) of its own. It was located on the road to Moscow. 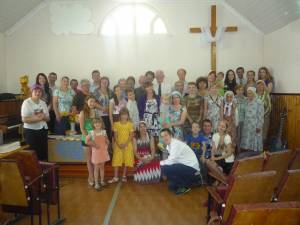 Both the river and the Moscow Road were important trading routes. What happened? Having been to the small, but lovingly organized, museum nearby, I can offer some explanation for why it is now a small and impoverished place. It is a territory that has been fought over for centuries as Lithuanians, Latvians, Poles, the French and Germans sought to invade. Because the Dorogobuzh kremlin was wooden, it was often burned, but then rebuilt.  During World War II the region was overrun by the German army as it moved toward Moscow. Dorogobuzh became a center for partisan activity, and the partisans actually liberated the city and surrounding villages in 1942, but in response the Germans utterly destroyed the city in 1943. Only a handful of Dorogobuzh men in the generation at war survived. Today the city of Dorogobuzh is off the beaten track. The railroad and the Moscow road now pass through nearby Safonovo.

I traveled to Dorogobuzh with members of a new partner church, Good Shepherd Presbyterian Church in St. George, Utah. The first encounter is often filled with the anticipation of months of planning and perhaps a bit of uncertainty. No matter how many questions pass through our inbox from both directions, none of us know just what to expect. I at least had been to both St. George and Dorogobuzh in the early stages of connecting the two congregations. 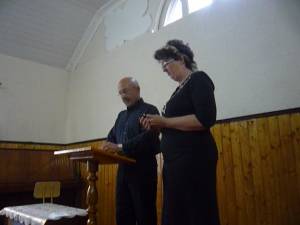 We are now at the end of our time here, leaving tomorrow morning. Looking back over the week behind us, I am in awe of all that the Lord has provided. Our hosts have shared generously with hospitality in the home, excursions to local historical sites, and opportunities to join them in their ministry. Rev. Ralph Clingan preached repeatedly (challenging my skills as a translator to the Russian language) to a congregation that appreciated the opportunity to hear the Word from the viewpoint of another culture. Again and again we joined in fellowship over tea with many different groups. Members of Церковь Слово Жизнию (Word of Life Church) in Dorogobuzh made an effort to spend time with us, welcoming the opportunity to get to know people from far away.

One conversation stands out in particular:

After an evening prayer service we sat in the dining room chatting with a small group. After the usual small talk, in response to a comment about partnership one Russian member of the group summoned the courage to deepen the conversation, asking us what we meant by that word. We talked about praying for one another, helping one another and encouraging one another. We talked about our need for one another, for fellowship across the boundaries the world creates, and that we had come to them not as Americans, but as Christians. That comment changed the tone of the conversation. Volodya looked up, understanding completely what we had just shared, and said, “And we were waiting for Americans.” In some way this different understanding of our purpose allowed Volodya to ask the hard questions—asking about race relations in the U.S. and the recent Supreme Court decision on marriage equality.  They asked about church growth, and somehow we ended up in a conversation about infant baptism and confirmation. They weren’t challenging us, but we were challenged. They wanted to understand and we wanted to help them understand. We talked for hours that night and somewhere along the way a hidden barrier fell away.

I think we all leave this place deeply thankful. We see the Lord at work in our time here and we are changed by it.

The relations between our two countries are at their lowest point in recent memory. Strangers have told me repeatedly that they don’t like my president. Propaganda is ripe and stereotypes are bold. Still, we have met nothing but hospitality. People are grateful for those who have been willing to travel to Russia in spite of world recrimination. Our Christian brothers and sisters, not just those in Dorogobuzh but throughout Russia and Ukraine, have told us repeatedly how important the face-to-face encounters are in these difficult times, and how important the common witness is as we engage in mutual ministry within the secular society. Our partners are affirming the importance of the Presbyterian model of long-term relationship. It is a witness of who we are as the body of Christ.

I fly home tomorrow afternoon. We will be hurrying to finish packing for our six months of itineration in the States. Emma is already packed for college. She’s pretty excited. We hope to have the chance to see many of you in the coming months. For now we ask for your prayers for Russia and Ukraine, for our upcoming travels, for the Russian Mission Network meeting in September, and for the many partnerships.