Building a Life of Faith. Support the Pentecost Offering.
Make A Donation Click Here >
Home › What We Do › Where We Work › Co-workers › Shared Memories

A letter from Ellen Smith serving in Germany/Russia

Forgive me for all I have said or done, as I am a terrible sinner!

The Great Fast has begun in Russia, one week after the beginning of our Western Lenten period, because Orthodox Easter this year will be one week later than Western Easter. Only once every three years do we celebrate on the same Sunday. The Sunday before the beginning of the Great Fast is Forgiveness Sunday. At the evening liturgy on that Sunday, when the Lenten period is announced, the congregants ask forgiveness of one another and perform the rite of forgiveness and reconciliation. On Monday morning I received the above words by email from an Orthodox friend. Deeply moved, my response could only be to ask forgiveness also.

I was in Russia at the beginning of February for a great celebration—the consecration of a new archbishop for the Evangelical Lutheran Church of Russia, Dietrich Brauer. Archbishop Brauer is the first Russian-born and -educated archbishop in the post-Soviet period. Previous archbishops came from Germany. Educated at the Novosaratovka Seminary outside of St. Petersburg, serving first as pastor, then bishop, Archbishop Brauer now leads his denomination with vision and energy. I would encourage you to read the sermon he preached at his consecration. 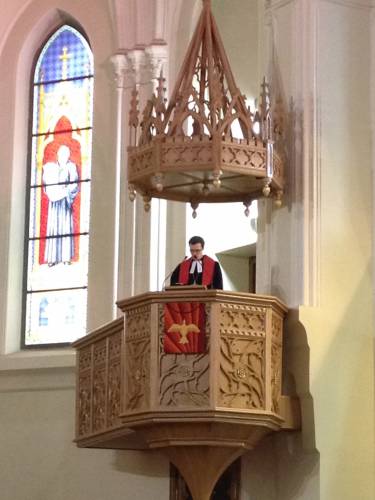 The consecration of a new archbishop for the Evangelical Lutheran Church of Russia, Dietrich Brauer

From the Sts. Peter and Paul Church I went straight to the train station for the next leg of my journey, the express train to Ryazan. Ryazan is one of those accidental blessings in my life. Al and I came to a roadblock early on with our partners at the Baptist Union, largely because someone didn’t know who we were or what we were doing. In sorting things out at a meeting with the president of the Baptist Union and several other leaders, I suddenly had a long list of places they wanted us to consider for partnership, and as it happened on that particular day there was a pastor from one of those places visiting the Union in an office just down the hall. Before I even knew where the city was located, I was sitting across the table from the senior presbyter for the region. I’m not sure which one of us was more taken aback by the encounter, but I think it was he. It was clear that he did not know what to make of me, a female missionary. What I then took as his reluctance did not fill me with enthusiasm, but we made a plan for my visit. As it turned out, I fell ill and had to cancel, but, to my surprise, he followed up to make sure we rescheduled. I was feeling a bit stubborn, so it was with great reluctance that I caught the train to Ryazan that first time, but it is a visit that is etched in my memory with the rich blessings that come only from God. As I made the journey again this month, the memories returned. There are deep bonds bound up in memory. I remembered the poverty, the cold, the discomfort, and the real joy in the fellowship. Ryazan has changed over the past 12 years. It is not the impoverished city it was. It now has all the big stores of Moscow and malls on nearly every street corner. The pastor’s son picked me up at the train station. He was on his way home from a youth gathering, and there were others in the car with us. Looking around at the glitz that is now Ryazan, I was comforted by the conversations going on around me—conversations about music ministry, about prayer, and about the call to serve. The church in Ryazan continues to disciple their youth in powerful ways. They were oblivious to the glitz, caught up in something bigger.

On my first trip to Ryazan we visited several churches in other cities of the oblast (state), looking at potential partners. At the first church I met a young pastor just starting out, a missionary from Georgia (in the Caucasus, not the U.S.) working hard to renovate an old building for a church and youth center. He was excited about the possibilities. It was to this church that Pavel and I returned this past month. The young pastor is not as young as he was, but he’s still hard at work. He and his church have had many roadblocks through the years, but they’ve been faithful. When one door has closed, they have sought another. Their plans for that building I visited on the first trip have not worked out, but they are still deeply engaged in youth ministry and have now opened a drug rehabilitation center. They still hope for a partner church. In these more challenging times, the fellowship across the boundaries is a powerful witness. Our Russian brothers and sisters know what isolation is. They know what a closed door looks like. Partnership is about relationship without doors.

As we returned to Ryazan, Pavel and I talked about that first trip and all the trips in between, shared memories. He recalled that first encounter too. There are deep bonds in those shared memories. Much of my first trip was spent explaining what we were trying to accomplish through the Twinning Program, partnership as opposed to sponsorship. Pavel has always had a deep understanding of what I was trying to explain. He is the pastor who has most often sought ways to help us. He and his wife used to take Emma for us in the summertime. She was a little girl and the schedule we had to keep with all the visiting groups was hard on her. Instead, she spent time with Pavel’s wife on their dacha, happily helping in the garden. Pavel has helped us in many other ways as well.

Back home in Berlin, I have spent time pondering the whole concept of “home.” Home is about family. When I am in Russia, I miss Al and Emma terribly, but I have something there that I have not found in Berlin—something that is caught up in those shared memories. My Russian colleagues are far more than just colleagues—they are my family too.

Sometimes we forget to share that there are still congregations hoping to find a partner church. There is something that we gain in crossing the boundaries (perceived or real), a deeper understanding of who we are as the body of Christ, a depth of fellowship that is difficult in busy lives. Russia has blessed me richly, even when it has been hard. I am thankful for the shared memories with brothers and sisters from both sides of the Atlantic. Perhaps your congregation would like to join us in the journey.

In September of this year the Russian Mission Network will be gathering at Zephyr Point, a Presbyterian conference center on the shore of Lake Tahoe in Nevada. We will be talking about the witness of the church in times of conflict. All are welcome. If you are interested, I can put you in contact with the right people.

As always, we thank for all the ways that you are in partnership with us—through your prayers, your letters, and your financial support.