Building a Life of Faith. Support the Pentecost Offering.
Make A Donation Click Here >
Home › What We Do › Where We Work › Co-workers › Resistance and Reconciliation

Lenten Greetings to you from Butare.

I pray that this Lenten season has drawn you closer to Christ. It has for me in an unusual way.

From March 11 to 22, I helped to host a peace study group with Carl Horton from the Presbyterian Peacemaking Program of the PC(USA). Participants came from 11 states, South Sudan, Kenya, Zambia and Rwanda. Pastors and lay persons in this international gathering met with church leaders in Rwanda, visited genocide memorial sites, spoke with peace-building groups and bought handcrafts made by reconciliation groups who are also building self-sustainable lives. The international flavor of this group brought a richness of understanding — especially considering the ongoing conflict in South Sudan — to Bible studies and discussions of forgiveness and reconciliation. There were many powerful moments of insight and moments of struggle with the reality of human pain.

Most of the locations we visited and folks we met with were not new to me, but there are always new things to learn. That was the case when we visited a memorial site near Lake Kivu. We had planned to go to the site in Kibuye by the lake, but it is under renovation and so the vice mayor of Kibuye took us an hour’s drive away to another site. I had not been there before, and as a leader was a bit uncomfortable going to the unknown but was willing to trust our Rwandan host. It proved to be one of the most significant sites I have visited. Bisesero is high in the mountains on a rough dirt road. It commemorates the resistance of some 40,000 Tutsi who fought against the Interahamwe militia for over a month in May 1994, using spears and stones to hold off the killers. Only 1,500 survived to continue hiding in the hills until the genocide ended on July 4, 1994. 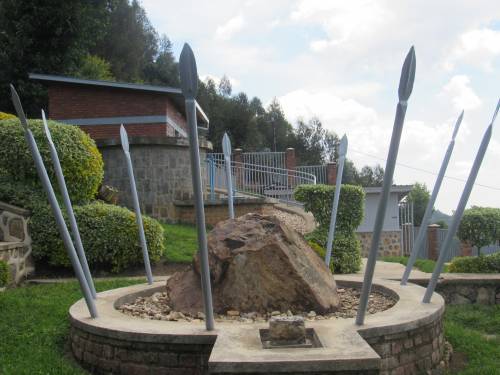 Spears to represent the resistance at Bisesero Memorial

The memorial is not in a single building but is comprised of several buildings climbing up the side of the mountain. The path from building to building becomes narrower as one climbs, illustrating the dwindling numbers and intense struggle of the resisters. The various buildings hold the remains of many of those who died in the resistance. The last section of steps are just rocks piled on one another, with some sticking up, recalling the stone-throwing battle at the end of the fight. As I climbed the mountain path, I could feel the struggle to move forward and could imagine the feelings of the Tutsi who were being pursued. As I climbed the path, I couldn’t help but think of Jesus’ climb to Golgotha and the pain he endured for our salvation. That is part of any Lenten journey, but it has taken on fresh meaning for me after walking the path of the resisters of Bisesero. The only salvation for many on that walk was the balm of heaven. Those Tutsi were fighting for their very lives, while Jesus was struggling for my life and redemption. I was not a part of either of these struggles, but both have impact on my life as I serve my Lord in this place of pain and memory. This symbolic memorial marks resistance, not something one hears a great deal about when the genocide is discussed. This gave a new perspective for consideration, but as Christians, we are familiar with resistance to evil and wrong. That is part of our faith walk and a point of reflection during Lent. It was for me this month.

As Rwanda approaches the 25th anniversary of the genocide with commemorations that will begin on April 7, this peace study tour was timely. Our discussions were reflective of many that are ongoing in the country as we wrestle with deep issues of forgiveness and reconciliation. These are issues that cut across all cultures. You were with me in these discussions, since I am here because of you and your sacrifice and commitment to me and the ministry here in Rwanda. Thank you for your prayer support and for your financial support. Together we are working on forgiveness and restoring life in many ways. May this Lenten season open the way to a blessed Easter for each of us.