A letter from Dan and Elizabeth Turk in the U.S., on Interpretation Assignment from Madagascar

Greetings in the name of our Lord.

We will be returning to Madagascar later this summer. As always, it is difficult to say goodbye to family and friends, but we also look forward to going home to Madagascar. We have enjoyed our contact with many of you and look forward to ongoing communication. Madagascar continues to struggle to find the political stability needed to help the vast majority of its 24 million people get out of extreme poverty. Presidential elections are scheduled for late 2018 but some political leaders are calling for early elections. Illegal trafficking in wildlife continues as does deforestation and corruption. Reports indicate that about 2 million people are currently facing famine in southern Madagascar. This misery is in addition to the almost 50 percent of Madagascar’s children who are stunted from chronic malnutrition. Thankfully, our partnership with the Fiangonan’i Jesoa Kristy eto Madagasikara (FJKM), our global church partner there, is yielding a new generation of vegetable and fruit tree growers who are addressing the root causes of poverty. We want to share some of what’s happening, but first, we want to lift up the newly reestablished Madagascar Mission Network. 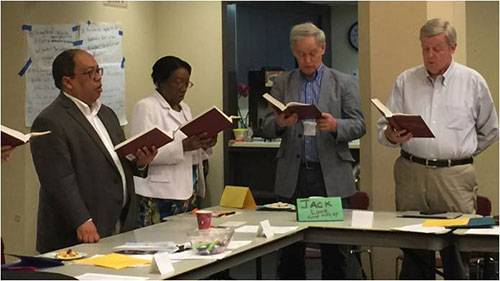 The Madagascar Mission Network (MMN) had an excellent meeting April 14-16 in New York City. The purpose of the meeting was to reestablish the network on a firm foundation to assist mission efforts in Madagascar. The meeting was attended by the president of the FJKM, Pastor Lala Rasendrahasina; Presbyterian World Mission Africa coordinator Debbie Braaksma; regional liaison Douglas Tilton; mission co-worker Dan Turk; and participants from Alabama, Florida, Nebraska, New Jersey, New Mexico, and New York. There was good representation from the Malagasy community (people from Madagascar) living in the United States. World Mission personnel provided examples and insight into structures and best practices for mission networks, and together we established priorities for the Madagascar Mission Network. President Rasendrahasina identified FJKM’s top priority as increasing the number and quality of new pastors coming out of the FJKM seminaries. A Malagasy cultural evening was one of the meeting’s highlights with music and dance provided by members of the Malagasy community in the New York area.

The participants elected a leadership team for the network with Thierry Rakotobe-Joel as coordinator and Lois Palecek, Jacky Radifera, Carol Hafer, Daniel Parker, Kenneth Thomas, and Jack Lohr as other members of the leadership team.

The next Madagascar Mission Network meeting will likely be in the southern U.S. in May 2017.

Becoming an active member in the Madagascar Mission Network is a wonderful way to become more involved in the PC(USA)’s mission partnership with the FJKM. We encourage congregations and individuals interested in participating in the Madagascar Mission Network to contact Thierry Rakotobe-Joel (email address: rakotobe@gmail.com) for information on how to become more involved.

Environment and Agriculture in Madagascar 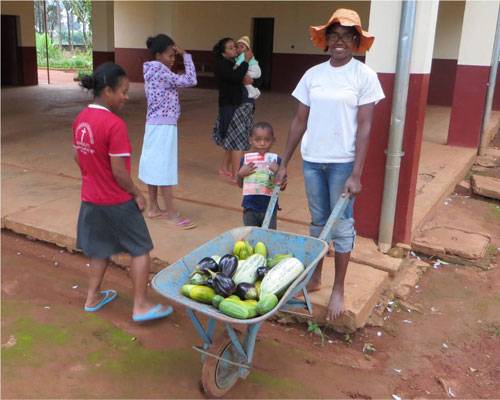 Ms. Onivah Arilalao and her son with Mission Crossroads magazine and vegetables from the Ivato seminary garden

Dan returned briefly to Madagascar in January to visit seminaries and other sites of the Fruits, Vegetables, and Environmental Education (FVEE) Project and to plan with Malagasy colleagues for ongoing work. Highlights of the trip included seeing the new water system at Fianarantsoa seminary. He was able to visit Pastor Rota and see the native trees and fruit trees planted at her church at Besoa near Ambalavao. He gave a copy of the Winter 2014 Mission Crossroads magazine to the young son of Ms. Onivah Arilalao. That issue has a photograph of his mother on the cover. It was heartening to see the progress of the gardening program at Ivato and Fianarantsoa seminaries and the enthusiasm of the students.

Project activities continue while we are in the U.S. Training in gardening, fruit growing, and environmental education is continuing for student pastors at Ivato, Fianarantsoa, and Mandritsara seminaries under the able leadership of Dan’s colleague Rolland Razafiarison. Since January the FVEE project has held tree planting and training exercises at the FJKM church at Besoa (living hedge, fruit trees and native trees planted previously), the MAMRE dairy center at Andasibe (71 fruit trees), the Tambohomena’s Spiritual Center of Antananarivo Andrefana Synod (40 fruit trees), the FJKM school at Soavimasoandro (10 fruit and native trees), the Besely church in the Boina Vaovao (Mahajanga) Synod (37 fruit trees and 7 native trees), at FJKM land at Ankadiefajoro Andoharanofosy in collaboration with the national youth branch of the FJKM church (STK) (living hedge of Syzygium cumini, jaboticaba and others around 10 hectares of land), the Ambalavao Synod (41 trees), at Andanona in collaboration with the FJKM national women’s organization (Dorkasy) (300 fruit trees). At the last event 3,870 women took part in planting trees on international women’s day. On March 14 the Ivato Seminary held its annual tree planting day. For 2016, instead of planting trees in the ground, the students and staff of the seminary transplanted 200 trees into 20-liter pots to prepare trees for landscaping the planned new FJKM university campus, which is to be on the site of the Ivato seminary. In addition, preparations are under way for the FVEE project to start a new fruit tree center about 200 km northwest of Antananarivo in an area ideal for growing citrus and mangos. 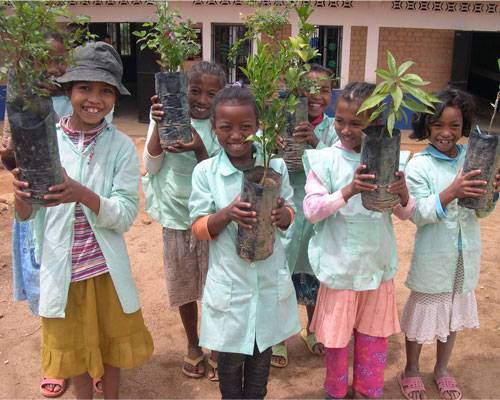 Students preparing to plant trees at an FJKM school

This is an important year for the FJKM as it holds its Synoda Lehibe meeting—equivalent to PC(USA)’s General Assembly—for a week in August. Every four years at the Synoda Lehibe the FJKM elects its officers and governing body. In addition to electing leaders this August 17-24, the FJKM will also be discussing many significant issues facing the church.

As always, we are very grateful for the many churches and individuals who make our ministry in Madagascar possible through your prayer and financial support. Please know that your support is bearing much fruit. Please continue! We very much appreciate your continued partnership in mission.