“So then, with endurance, let’s also run the race that is laid out in front of us, since we have such a great cloud of witnesses surrounding us. Let’s throw off any extra baggage, get rid of the sin that trips us up, and fix our eyes on Jesus, faith’s pioneer and perfecter.” Hebrews 12:1-2a, Common English Bible

I find a spot within reach of the fan as we gather in a comfortably crowded room on a hot August day near Barranquilla on Colombia’s Caribbean coast. I am surrounded by siblings in Christ representing each church in the Presbytery of the North Coast and the evangelism committee of the Synod of the Presbyterian Church of Colombia (IPC) at the start of a two-day consultation to share strategies and visions for the future of the church.

After song and prayer we recall together the history of the church. Presbyterians were the first Protestant church to arrive in mainland Colombia. U.S. mission worker Henry Barrington Pratt led the first Presbyterian worship service in Bogotá in August 1856. He helped organize a congregation before returning to the U.S. because of the Civil War and urged the U.S. church to send more mission workers to Colombia.

Back then, strong Roman Catholic influence in the government and Colombian society meant that Presbyterians and anyone else who identified as the religious “other” were treated with hostility. Only in recent generations have these wounds begun to heal. Presbyterians persisted, focusing on creating worshiping communities and schools. They promoted Reformed values by accepting children from all traditions as students at the Colegio Americano schools that opened first in Bogotá and later in Barranquilla and other cities. When the period of partisan violence known as La Violencia broke out in 1948, First Presbyterian Church of Barranquilla sent letters of support and encouragement to the town of Dabeiba, where violence between Conservative and Liberal partisans was intense, eventually leading to the bombing of the Presbyterian congregation there. Sadly, the impulse to annihilate the “other” continues in Colombia even today. 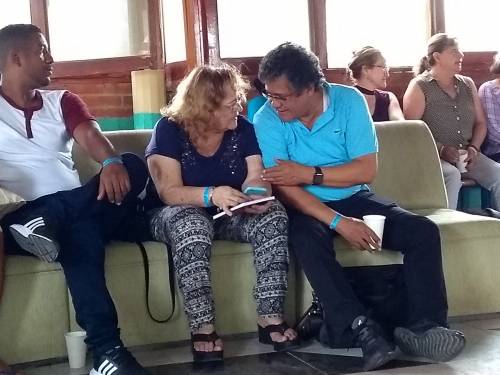 Participants converse during a break at the evangelization consultation.

For decades, PC(USA) mission workers have been part of the reconciling work and witness of the IPC. Barranquilla’s Fourth Presbyterian Church first met in a garage that also served as headquarters for a local labor union, under the pastoral leadership of Richard Shaull in the 1940s. Alice Winters shaped generations of Colombian pastors and lay leaders through her teaching over more than 30 years of service. Participants in the evangelization consultation lift up the work of these and many other mission worker colleagues during this time of sharing.

Listening to these memories, I suddenly perceive myself as the embodiment of the mission legacy shared by the U.S. and Colombia. I feel both pride and discomfort. It is a beautiful legacy, characterized by strong educational institutions, a vibrant commitment to social justice, and countless lives touched by Christian love and solidarity. But I know—even if these stories are not shared here—that the legacy has its ugly spots, too. Some of my predecessors were known for their arrogance, and some promoted theological perspectives which sowed seeds of discord in the church. Some reinforced paternalism even in their generosity. Certainly I have made missteps along the way, too.

I remember my days in seminary and how conflicted I felt regarding my sense of call to ministry with the church in Latin America. I feared replicating paternalism or imposing my foreign presence in places where local church leaders should take the lead. A classmate from Bolivia assured me that I would never do that, and even though we both knew it’s not that simple, her affirmation gave me permission to try, to be humble and flexible enough to be taught as much or more than I might teach. When I moved to Bolivia a few years later, colleagues introduced me to the idea of decolonization of the mind—not only systems and structures, but our very ways of thinking and being need to be relearned, moving from domination to mutuality, and embracing diversity and multiplicity.

As my mind meanders on this warm afternoon, the conversation in the room moves to the church’s need to rethink the way things have always been done. As we consider the call to evangelism, we must have a clear sense of what the church has to offer the world, and what it means to invite others to join us in our efforts faithfully to follow Christ’s call. What does it mean to be a member of the church? Do numbers matter? If so, who does the counting and who is counted? Can we shift from prioritizing numbers on the rolls to nurturing all those who identify as part of the body?

We remember one of the essential tenets of the Reformed tradition: the sovereignty of God. We note how hard it is to live into our identity as part of God’s beloved creation in a world defined by our ability to consume, our economic productivity and our adept manipulation of technology. How urgent is our need to radically and insistently rediscover our Reformed roots!

Fast forward to the current pandemic. These ideas seem all the more timely. “Business as usual” has come to a halt, and governments ask us to choose between the value of human lives and economic growth. With my Colombian siblings I am sure that we are called to be community to one another, and to meet the needs of the hungry, the sick, the lonely, the brokenhearted. Now is the time to hearken back to the early days of the church, worshiping in homes and caring for our nearest neighbors. At the same time, we are learning that technology can help us to reach out to one another across continents, exploring new ways of being church together.

I’m so grateful for your support and connection in this challenging time. Let us continue to pray for one another and support one another as we nurture the new things God is doing in our midst.

In hope and faith,