A Letter from Dan and Elizabeth Turk, serving in Madagascar

When we visit churches in the US, Elizabeth and I always emphasize that as Presbyterians, we do mission in partnership. World Mission talks of “Communities of Mission Practice” where churches in the USA and mission co-workers in the field work in partnership with a partner church in another country. Elizabeth and I feel that the way PC(USA) has been doing mission in Madagascar provides many good examples of mission in partnership. It is something that we, as mission co-workers in Madagascar for over 20 years, feel very good about.

In Madagascar, PC(USA)’s partner church is the Fiangonan’i Jesoa Kristy eto Madagasikara (FJKM), the Church of Jesus Christ in Madagascar. The FJKM is the largest Protestant church in Madagascar, with an estimated five million members, approximately one-fifth of the country’s total population.

Partnership means that we work within structures and priorities of the partner church. It means that as mission co-workers we have supportive roles, that we don’t sign checks, and that we work closely with FJKM colleagues. Partnership means seeking the fine line between using our education and experience to the fullest while working in collaboration in ways that make us the opposite of indispensable for whatever task is at hand. It means helping to build capacity, lifting up our colleagues, having flexibility and finding creative ways to achieve some form of sustainability. Hopefully, when partnership works well, as with good community development, our partners will say, “we did it ourselves.”

Exciting examples of partnership abound. For over 15 years, the PC(USA) has supported FJKM’s training of seminary students in HIV/AIDS. As a result, many churches and communities now have leaders who understand HIV/AIDS and how to combat it. As Madagascar fights discrimination against those living with the virus, educated pastors are an important key to this battle. In the area of food security, the PC(USA) has partnered with the FJKM to assist the Antanetibe community with tangerine production that is helping the community get out of poverty. Community members are now making money from selling tangerines. Partnership with Presbyterian members and congregations has brought life-changing safe drinking water to other communities like Tsaramiakatra and Mahatsinjo-Antsoatany.

Dan with villagers at Antanetibe 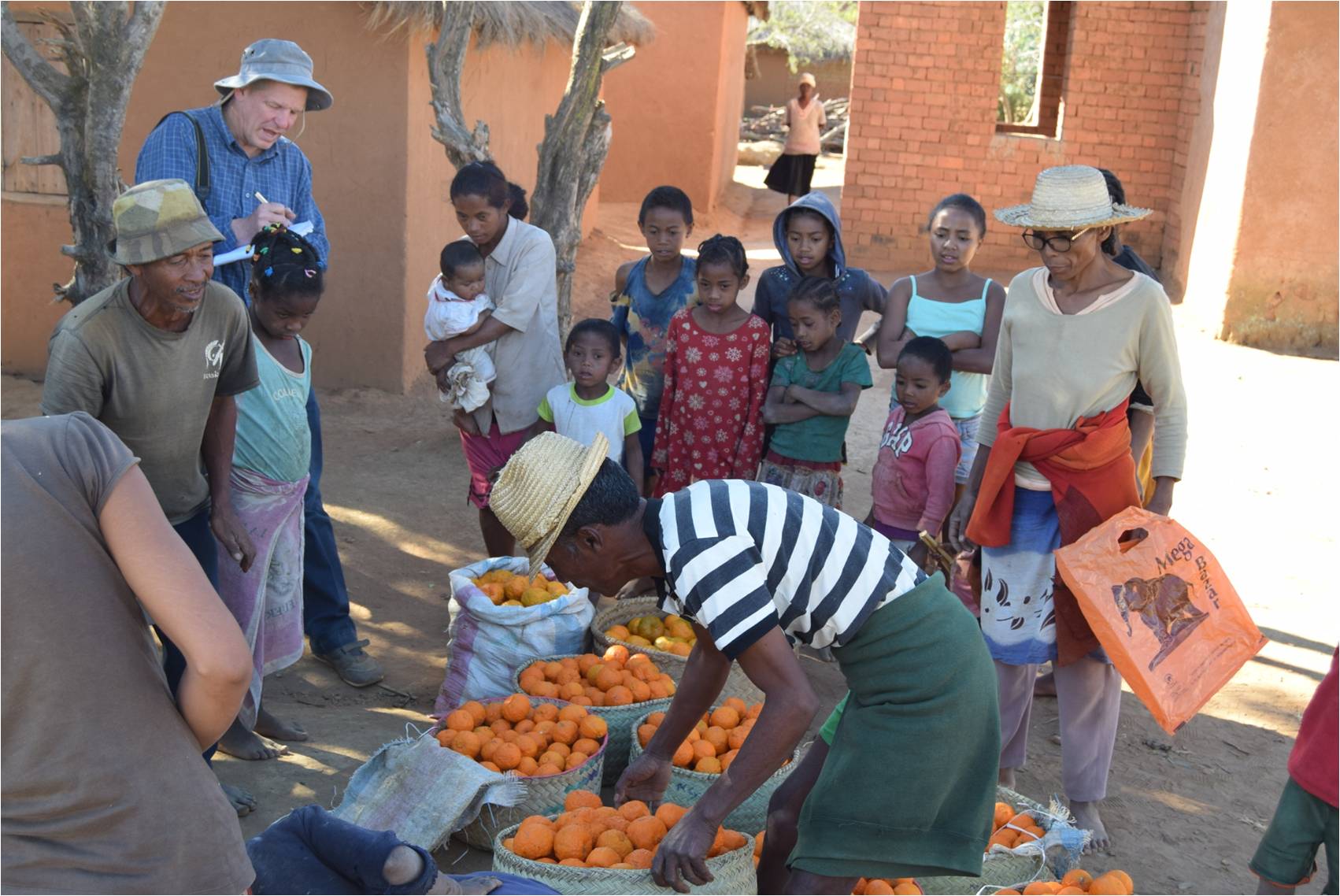 Tsaramiakatra community members have just celebrated the 10th anniversary of their water system’s installation. In these10 years, the community has used its water system to build new houses, put in communal fish ponds, build communal washbasins for washing clothes, and to plant more fruit trees. They have also created a rice storage cooperative and had two successful changes of leadership in the community water management committee. While the Tsaramiakatra water effort was mainly supported by Faith Presbyterian Church in Tallahassee, the AIDS project, the Mahatsinjo-Antsoatany water project and the Antanetibe tangerine project were supported by many different Presbyterian churches and individuals. In many ways, small contributions come together to make big changes in people’s lives.

This past November, a whole new group of Presbyterians was introduced to the wonderful ministries of the FJKM when PC(USA)’s Peacemaking and Environmental Reconciliation Study Seminar took place in Madagascar. It was a privilege to be with them as they visited many of the FJKM’s ministries and learned of the FJKM’s holistic ministries that intertwine evangelism and practical care for people’s needs.

Although officially started in 1968, the FJKM is a direct result of the mission efforts of the first London Missionary Society missionaries, British Quakers and French Protestants. The first missionaries arrived from Wales in 1818, 200 years ago. It is exciting to be able to celebrate the FJKM’s 50th anniversary this year as well as the 200th anniversary of the arrival of the first missionaries. August 18-19, we will be joined by Jan Heckler (mission co-worker working with FJKM schools), Doug Tilton (regional liaison for southern Africa), and Debbie Braaksma (Africa coordinator for World Mission) as we celebrate with the FJKM in Toamasina. The FJKM will be dedicating a new school building at the David Jones High School, which is named after one of the first missionaries. The week of October 21 will conclude the celebration year with the dedication of a new building for the training of FJKM pastors at the FJKM Ivato Seminary.

As we celebrate with the FJKM its 50th anniversary, we look forward to the ways that the Lord will lead the PC(USA) and FJKM in partnership in the future. Thank you very much for your role in this partnership. We deeply appreciate your prayers and financial support. Without them, we would not be able to serve the Lord here.