Make A Donation Click Here >
Home › What We Do › Where We Work › Co-workers › Mamonjy, A Human Trafficking Prevention Campaign in Madagascar

A Letter from Christi and Jeff Boyd, serving in Africa

Individuals: Give online to E200314 for Christi and Jeff Boyd’s sending and support

Congregations: Give to D506075 for Christi and Jeff Boyd’s sending and support

Churches are asked to send donations through your congregation’s normal receiving site (this is usually your presbytery).­­­­­­­

Once rescued, survivors of human trafficking are often reluctant to talk about their experiences. This is usually because they are afraid of being blamed by family and community for the exploitation and abuse they’ve suffered at the hands of bosses and employment agencies. Juliette (not her real name), however, is speaking out. She is concerned about other women who may fall victim to profiteers. When I met her several years ago, she even agreed for me to record her personal story, trusting that I would share it with sensitivity.

Juliette decided to escape Madagascar’s financial crisis after a military coup in 2009. She approached a recruitment agency that offered her employment in Kuwait. Yet the hard work, lack of free time and imposed religious observances took a toll on her health and eventually landed her in a hospital. Juliette realized it would be better for her to return to her home, but she faced many obstacles: “The agency didn’t allow me to return to Madagascar. The agency wanted me to stay and work. Then the people at the agency beat me and forced me back to work.” Complicating Juliette’s situation was the fact that her passport had been confiscated upon her arrival at Kuwait’s airport, and Madagascar has no diplomatic representation in Kuwait to advocate on her behalf. Eventually, she escaped and ran to the French Embassy, where staff helped her find temporary shelter.

Juliette is one of 235 trafficked Malagasy women rescued from working against their will in Lebanon or Kuwait over the past decade with the help of the Rev. Helivao Poget. Pastor Helivao is director of the Ministry for Marginalized People (SAFFIFAA) of the Church of Jesus Christ in Madagascar (FJKM). SAFFIFAA began in 2009 under the auspices of FJKM’s Chaplaincy Program to address the hardship of vulnerable groups as a result of the political predicament. When an FJKM member phoned her, alarmed about a close relative who was trapped in a similar employment scheme in Kuwait, Helivao traveled to Kuwait to evaluate the situation. She found scores of Malagasy women in similar situations, including Juliette, and eventually helped secure their return to Madagascar. 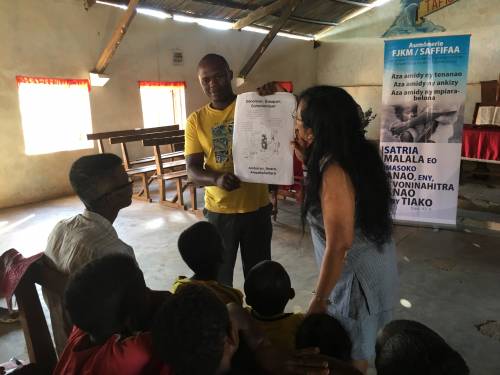 Pastor Haja and the Rev. Helivao Poget at a domestic violence and human trafficking awareness-building activity with the FJKM congregation of Tsararano in Madagascar.

Once these women were back home in Madagascar, Helivao started pondering how to counter the migration phenomenon in Madagascar that ultimately leads to trafficking abroad. She concluded that a dangerous concoction of domestic violence, local customs and severe poverty particularly renders young women from rural communities vulnerable:“In our assessment of the situation of trafficking survivors who return home, most of the women leaving are already survivors of domestic violence. They say: ‘We already are victims of assault and battery within our own families. We are already prepared to be beaten. Even if we are going to be beaten … it would be by someone else that we don’t know, but maybe we’d have a good salary.’”

This is how Helivao shifted her focus to address human trafficking in Madagascar and elsewhere towards prevention, which begins with addressing domestic violence and raising awareness of the risks of being trafficked into a situation of forced labor or worse. Thanks to a 2019 Presbyterian Women Thank Offering grant for SAFFIFAA, Helivao launched a human trafficking prevention campaign called Mamonjy, which means “save” in the Malagasy language.

As a missiology professor on the FJKM theological faculty, Helivao engages her former students in the Mamonjy campaign and works with the FJKM’s regional synod committees to organize awareness-building activities for local congregations in 10 zones, which she has identified as the most vulnerable areas across the island nation. I had the privilege of accompanying Helivao when she launched the Campaign in the rural town of Bevilany, in North-Central Madagascar. Our host was Pastor Rojovola (Rojo), who leads there a cluster of FJKM churches together with her husband, Pastor Haja. I knew Pastor Rojo from my last visit to Madagascar, when she did her three-month Missiology field study alongside Pastor Tsoa, a graduate of an earlier cohort of missiology students.

Seeing Rojo confidently taking the lead in the campaign activities filled me with deep gratitude for Helivao’s unique and effective way of involving students in SAFFIFAA’s ministries and contextualizing academic course work by placing individual students in isolated, vulnerable communities across Madagascar as part of the Missiology class. Every year the immersion experience nurtures a new cohort of pastors who are better tuned into the day-to-day struggles of underserved communities. In turn, the field studies help inform mission and ministries at the denominational level. This is how, over the last several years, domestic violence, migration and trafficking in Persons have become prioritized as a concern of the FJKM and for which I have been invited to come alongside.

Since my visit coincided with a series of intensive training days for her Missiology students followed by a commissioning service for their field study, Helivao had asked me to help prepare a full day workshop for the students to engage in the topic of domestic violence. She particularly wanted me to incorporate various resources that I’d shared earlier with her from partners elsewhere in Africa. This is how, through use of videos I had recorded, students heard Pastor Christine from Congo explain how she organized a women’s rights campaign to address harmful cultural practices against women. The students then followed a presentation based on the tools that Christine had used about different forms of domestic violence – physical, emotional, economic and psychological – and the cultural, religious, political and legal influences that condition them. To allow the students to engage with the topic at a deeper level, they were invited to partake in a participatory planning workshop for them to identify obstacles that keep the Church from moving towards a hypothetical vision of a Malagasy society where members in FJKM congregations and their communities are actively engaged in the eradication of domestic violence in all its dimensions from their families and society at large.

Working first in small groups and then in plenary sessions, the students named and categorized root causes, such as perceptions, attitudes, practices, and structures that need to be overcome. The time was too short to complete the process, but the exercise brought out a few clear directions: survivors and witnesses of domestic violence are not speaking out about their experiences for fear of repercussions from both the perpetrators and the community; by taking a position that domestic violence is a couple’s private matter, the Church makes itself an accomplice through its silence and indifference; and for lack of civic education, communities remain ignorant about basic human rights, particularly in isolated areas.

Meanwhile, in a first round of awareness-building activities during FJKM Synod meetings, Youth conferences, and congregational gatherings, the Mamonjy campaign has expanded to all ten districts that Helivao had identified, reaching thousands of people across Madagascar. Campaign tools vary from banners with anti-trafficking slogans based on Scripture, to posters to prompt conversations about the various forms of domestic violence, and crayons for the youngest generations to draw pictures of things for sale in the marketplace. The message for them is, “You are a beautiful creation of God. God loves you, and you are not for sale!”

Coming alongside our global partners to help them share insights and resources among themselves, and to build bridges between them and our churches in the U.S., gives me deep joy. I am grateful for all who provide support through prayer, words of encouragement and financial contributions, with special thanks to all Presbyterian women across the U.S. who have helped launch the Mamonjy Human Trafficking Prevention Campaign through their Thank Offering!