A Letter from Choon and Yen Hee Lim, with Choon serving as Regional Liaison for East Asia, based in South Korea

Due to the Korean War, I hated my father, and I hated North Korea for starting the war. I was born into a very conservative Christian family in Nampo, North Korea, and during the Korean War, my mother, elder brother and I moved without my father to Ilsan near Seoul, South Korea. I was less than 2 years old, and my brother was 2 years older than me. My mother carried me on her back all the way to Ilsan. The Korean War gave us hardship and suffering, not only during the war, but also after the war when we lived in both South Korea and the US. My father promised to meet us at my relative’s house in Seoul, but he never came. I have not seen him since leaving North Korea — I don’t remember him at all. Anytime I see my mother, who has struggled in her daily life in South Korea and the US, it pains and angers me.

Is it God’s providence that these things happened to me? In 2012, I became regional liaison for East Asia, which covers Taiwan, Hong Kong, China, Japan, North Korea and South Korea. Although Presbyterian World Mission has had a strong relationship with the Korean Christian Federation (KCF) in Pyongyang, North Korea, since 1978, there was no PC(USA) mission co-worker to North Korea. I was fortunate to be invited to assume a mediating role between the PC(USA) and the KCF and began visiting North Korea 2-3 times a year. Rev. Dr. Syung Man, Rhee, who worked for the World Mission of the Northern Presbyterian Church in the States, began mission work in North Korea. He met Rev. Ryang-Uk, Kang, who was a vice premier and a friend of Rev. Rhee’s father, when visiting Pyongyang in 1978. (It is a long story.) Later, Rev. Rhee also met a premier of North Korea, Il Sung Kim. After that, Rev. Rhee visited North Korea many times and supported the KCF as it built Bongsu Church and Chilgol Church in Pyongyang with the assistance of Korean churches in South Korea and the US, and of some non-Korean US churches. 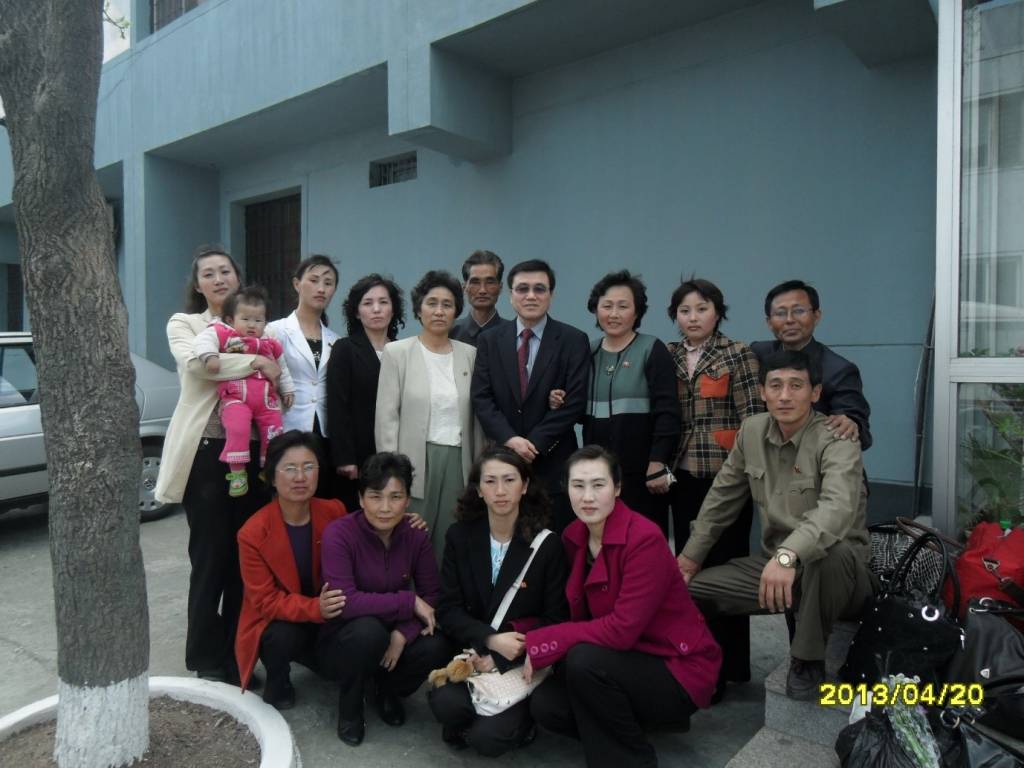 With my siblings and their families in front of a restaurant in Pyongyang, North Korea.

In 1994, my brother’s company was building a light water reactor in North Korea with KEDO (Korean Energy Development Organization) that acted as a stabilizing factor on the Korean Peninsula. (North Korea had agreed to a nuclear framework with the US and South Korea.) My brother often visited North Korea to supervise the project. One day, he asked an official of North Korea about our father’s whereabouts. On my brother’s next trip, the official told him that he had found our younger cousin. In 2000, my brother met the cousin and learned what happened to our father. Now we know why my father decided not to come to Seoul.

A witness living in Nampo told my father that the boat we took from the Nampo harbor was bombed by US military aircraft, and that there were no survivors. My father remarried, and he died in 1992. I learned that we have three younger brothers and two younger sisters who live in North Korea. When my mother heard this, she was shocked, and later asked me to help them. I visited Nampo to see my siblings in 2004. With unconditional love, I have met my siblings many times since then, and now they have become a part of my family. Truly hate cannot drive out hate; only love can do that.

On August 12, 2018, Yen Hee and I attended the 2018 North-South Joint Prayer for Peaceful Reunification on the Korean Peninsula at Ahyun Salvation Army Church in Seoul. Every year, the North Korean (KCF) and South Korean (National Christian Council of Korea, or NCCK) churches gather together to prepare the prayer text and share it with all churches in North and South Korea and around the world so that we can pray together for peaceful reunification on the Korean Peninsula. Every year the text is used on the Sunday right before August 15, the national anniversary of Korea’s liberation from Japanese rule and Korea’s division. This year, two churches in North Korea, Bongsu and Chilgol in Pyongyang, designated August 12 as the Sunday of Prayer. This year especially, we emphasize prayers for “an expression of repentance and commitment.” Rev. Shin Seung-Min, the program executive of the NCCK, said, “In creating hatred and antagonism in the past, the Korean Church has played a key role, as many Christian leaders in the South were refugees from the North. Therefore, for we Korean Christians, this Sunday worship is a concrete expression of our repentance and a commitment to peacemaking.” I want to share this prayer with you. Please join me in prayer:

God of love!
We thank you Lord that Christians in North and South Korea who live in the same land, under the same heavens once again greet this year’s Liberation Day. Though August visits us every year, we have long forgotten that overwhelming moment of the past. For the last 73 years of separation, while in constant conflict with each other, we have failed to embrace each other with love. Lord, have mercy on us.

God of history!
We greet this year’s Liberation Day with new hope. The period of separation, war and hostile confrontation that our people went through is dimly fading away, and we now look at the rainbow of peace and prosperity stretching over Mount Halla to Mount Baekdu. God, who rules history, lead this land to greet a new history of peace, unification and prosperity.

God of peace!
Help us overcome with strength the many walls and high barriers that still remain. The historical meeting between the North and South Korean leaders has taken place in Panmunjom, once a site of separation and conflict, and now with the signing of the Panmunjom Declaration, the two Koreas have finally taken a step towards reconciliation. But the walls of separation and the embers of war still remain. We pray that by completely removing any contemptible barriers of separation that threaten the people’s livelihood and block common prosperity, you bring-long lasting peace that may be a stepping stone for peace not only in the Peninsula, but in Northeast Asia and the entire world.

God of hope!
We pray that we strive for bigger dreams. Though our people once shared a 5000-year-long history, we have lived in separation for the last 70 years. We can no longer be forced to suffer the misfortunes and pains of separation. Help our people greet a turning point in history at this new crossroad. Lead us to open our hearts and join shoulder to shoulder to envision a new road of strong peace and stable prosperity that will lead to unification.

God of creation!
With faith we have seen that Panmunjom, once a site of separation and confrontation has now become a place that signals the beginning of peace, unification and prosperity. Now let the peace conceived in Panmunjom blossom and bear the fruits of peace and unification which our people have so long yearned for. Give us peace and courage so that the Christians of the North, the South and the entire world work for the peace, unification and prosperity of the Korean Peninsula and lead the Christians of the world so that they can actively support this mission.
Jesus Christ’s name we pray, Amen.

We deeply thank you for your support and prayers for our safety and ministry, and especially for peace on the Korean Peninsula. This is a critical time in East Asia because of its conflicts and confrontations between countries, and it gives us an opportunity to serve as a bridge builder, peacemaker, and reconciler as Jesus asks us to be. As you continue to support us, we will put all our efforts toward doing God’s mission on the Korean Peninsula, East Asia and beyond.