A letter from Esther Wakeman serving in Thailand

The co-chair of the missions committee of one of my supporting churches wrote recently saying that her session had asked for a story of gratitude from one of their missionaries, which she would then share at their annual congregational meeting. The theme for the meeting was “Gratitude,” or Gratitude for God’s work in the lives of his people. Here is what I wrote—

Thank you for your faithful support of our ministry at Payap University for so many years. A week ago I caught up with one of our new alumni, a young man named Gwaan, who graduated with a degree in psychology last year. He was visiting the campus because he was remembering his time at Payap with gratitude and decided to stop in. I’ve written and spoken about Gwaan, so some of this may sound familiar. Gwaan is a young man who is comfortable with asking for help; he also loves to give help!

I met Gwaan his first year at Payap in the men’s dorm. He knew who I was and in a friendly manner approached me and asked, “You’re a Christian, right? And a psychologist?” “Yes,” I said. “Can we talk?” he asked. “I’m a Christian and here at Payap to study psychology, but I’m afraid I might lose my faith in college.” We met a few days later, and as we talked we discovered he was harboring some significant hurt from disappointment with Christian leaders in his life. As we brought this hurt to Jesus in prayer, Gwaan felt he should begin to try to forgive from his heart, and he started the forgiveness process. I was grateful that he was humble and open to receiving this help from the Lord. I felt that the risk to his faith in college was not from studying psychology, but from harboring hurt in his heart that could eventually lead him away from following Jesus and lead him toward bitterness and judgment. 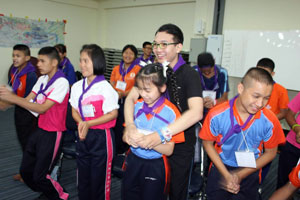 During the next couple of years, Gwaan participated in student leadership, but he found it quite a struggle. I was privileged to provide some support during those struggles, and Gwaan learned more about his limits and his gifts. During his final year at Payap, he did an internship at the Blind School of Chiang Mai providing life skills training and guidance counseling. He was the first “counselor” that the school ever had. He met and encouraged the Christian students at the school, as he was the only Christian on staff. They even started a Bible study/prayer group. Toward the end of his internship, he submitted a proposal to the school that they establish a position for a counselor, and he let them know he would love to have the position. He was hired and has served now for a full school year (May-March). He was interviewed recently on a local TV station because he is the first counselor in a blind school in Thailand. He is blazing a trail of service for young people with sight disabilities in keeping with Payap’s motto, “Truth and Service.” 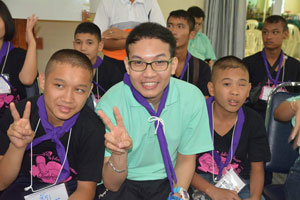 Gwaan with some of the students he counsels and encourages

When I caught up with Gwaan last week, he told me with great excitement that he has started a “Life Club” with several college students and recent graduates who are interested in working with him on a life skills training team, to take his message of hope and understanding to schools and other groups. Most of his new team are fellow believers, and this is a way he can mentor and encourage them in their walk with Jesus. Two other young men who are not yet followers of Jesus are interested in being part of the club, too—Gwaan would love to have them join in so that they might have the opportunity to come to know Jesus.

I’m grateful for the opportunity to meet and encourage young people like Gwaan. He is making a difference with a group of people who tend to receive pity from society more than empowerment. Gwaan loves working with them, providing emotional and spiritual nurture, and he is using his position as a springboard for wider social impact as well.

Thank you for participating in ministry with us here at Payap University through your prayers and gifts. Please continue to pray for us as we are facing stiff challenges in recruiting students; we need to develop other funding beside tuition so that we can continue to provide a quality and caring educational environment.

In addition to how grateful I am for Gwaan, I want to remind you that we still have openings for volunteers to come and teach a tiny bit of English at our English Fun Camp this summer (July 8-22). Also, our nursing faculty would welcome female volunteers to come and live in the dorms for three weeks to three months to help teachers and students with English. AND we really need TESOL (Teaching English to Speakers of Other Languages) teachers (they need to have a doctorate in TESOL).

Thank you for partnering with me in ministry. I am deeply grateful.