Register for the next Matthew 25 Online Event – Eradicating Systemic Poverty: Global Issues
Make A Donation Click Here >
Home › What We Do › Where We Work › Co-workers › Listening and Learning

Congregations: Give to D507588 for Cathy Chang and Juan Lopez’ sending and support. Churches are asked to send donations through your congregation’s normal receiving site (this is usually your presbytery).

Greetings from Quezon City, Philippines! Our apartment is looking more like home, the roads are slowly becoming more familiar, we are starting to meet more people, and we enrolled our daughter, Aurélie, in school.

School-aged children began summer vacation during Holy Week, which helped us parents to learn about the different school systems. We appreciate your prayers for our school selection process. Although the possibilities seemed endless, ranging from Montessori preschools in our neighborhood to church-based preschools, to Catholic schools, we decided on a school with an English-based curriculum called Dilliman Preparatory School. To ease the transition back to school, Aurélie enjoyed swim classes, Filipino language sessions, along with basic reading and writing at her new school. Juan also found the best jeepney routes to get to school. Their daily routines included discovering more local flavors and tastes without getting sick—Juan’s street smarts came in handy. 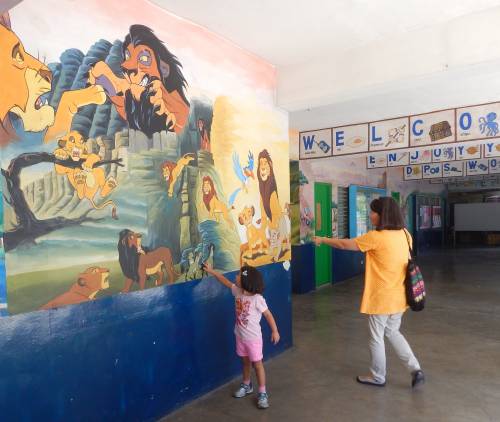 Entranceway to our daughter’s new school

Meanwhile Cathy traveled to the U.S., trying not to be too sad about missing Aurélie’s 4th birthday. Freeing as it was to travel alone at first, the emotions associated with this big move must have finally caught up with her. Before boarding the plane, Cathy couldn’t even get through “Good morning” on the phone without choking up. Returning home with many cards and gifts for our daughter was a wonderful way to celebrate a second birthday party!

While traveling Cathy realized that her attention was divided between keeping up with U.S. churches and what was happening in the Philippines. From daily news dispatches Juan shared how the weather and politics were heating up, because this month was the run-up to the Philippine presidential elections. On May 9, while most Philippines headed to the polls, we decided to stay home. Hearing about the laws against purchasing, selling and carrying firearms in the days leading up to the elections, we didn’t know nor want to experience firsthand any of the gun violence. Nothing happened in our neighborhood, but in other parts of the Philippines, unfortunately, violence did claim several lives. 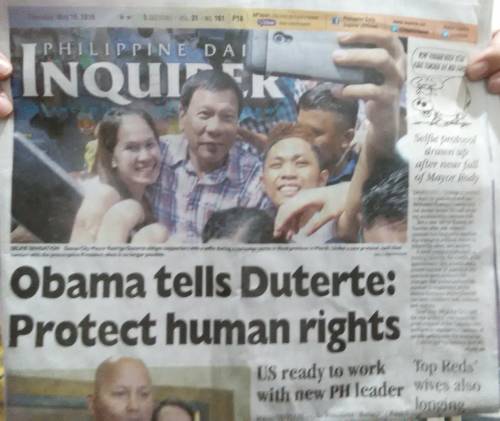 May 19 headline from Philippine Daily Inquirer

In the weeks before the inauguration of President-elect Rodrigo Duterte, we watch the news and await his administration. We’re not the only ones, because many of the Philippine people, the rest of Asia like China and Japan, and the world, are watching and waiting. Final results from the vice presidential race between Maria Leonor Robredo and Ferdinand Marcos Jr. were still unclear. Yes, that is the name of the son of the ousted president from the 1980s. Due to some technical issues from automated voting, Marcos asked for an audit to review the election results. As of late May, Leni Robredo has been proclaimed as the incoming vice president.

Cathy’s ongoing orientation to Philippine culture moved from presidential politics to church politics and polity. From COMELEC to NOMELEC, the acronyms are respectively similar for national and ecclesiastical nominating and election committees! Our home church, National City United Church, hosted the annual session of the United Metropolis Conference over three days. The closest translation to “conference” could be rendered as “presbytery meeting.” While working in the national UCCP offices, I will also serve as a pastor with membership and privileges in this conference. Not only is it good to be connected with a local church, but it is also good to develop relationships with other local church pastors and other church workers.

Under the theme of “Spirituality for a New Humanity,” based on 2 Corinthians 5, I learned about this past year’s ministry and mission in addition to observing plans for the future. The United Church of Christ in the Philippines (UCCP) consists of five denominations, namely, the Presbyterians, Philippine Methodists, Brethren, Disciples, Congregationalists. From this unique mix it is a wonder how church leaders discuss and deliberate different orders of business. Although local churches exercise a degree of autonomy, a “Quadrillenial Thrust” from the UCCP General Assembly provides a visioning and planning framework for the local churches to plan their upcoming four ecclesiastical years. It’s good to know how the social justice and advocacy around human trafficking and migration might fit into the ministry of these local churches and how I can use this thrust as a basis for shaping my ministry.

Mostly observing these business discussions, Cathy visited with local pastors and church workers, along with students training to be church leaders, over meals and snack times. Several church leaders have already extended invitations, and one female clergy member has already offered her accompaniment and spiritual support. While listening and learning is engaging, Cathy also learned the hard way about the need for self-care. After returning home from those meetings without drinking enough water, Cathy suffered from excruciating headaches: stay hydrated!

From the gush of Cathy’s tears at an airport terminal, to Cathy’s headaches after not having enough water to drink, water is everywhere. The rainy season has begun earlier than usual, with torrential rains pounding and predictably arriving at least once most days. Leaving the house with an umbrella for sun and rain is a must. New rain shoes are needed, along with renewed patience with extra puddles and extra traffic. Please pray with us for Aurélie’s new school year in early June, in addition to our ongoing adjustments and new relationships. 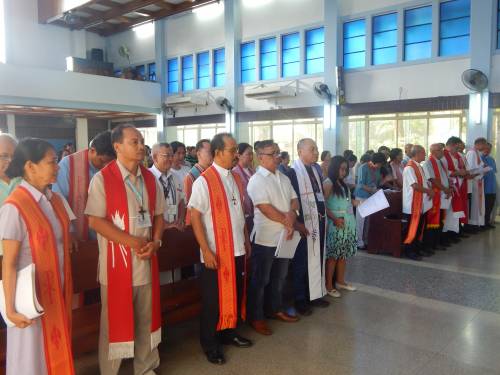 On May 25 the UCCP celebrated its 68th anniversary at the UCCP Ellinwood Malate Church, the historic church that hosted the General Assembly meeting in which the denomination was formed. How wonderful to celebrate the ongoing mission and ministry of the UCCP, with a celebratory worship service! A PowerPoint presentation featured black-and-white historical photos of the church forebears, but due to technical issues the projection screen later went black. Although the translation was not entirely clear, a beloved bishop later offered remarks and encouraged people not to think of their future as black. Taking cues from his remarks, we also affirm that history is living among the people of God who gathered to celebrate and to continue together in God’s mission and ministry.

For the individuals and congregations and presbyteries who already support us, we’re grateful to God for the ways that we are connected in mission. If you’re not involved with this mission partnership, we invite you to stay connected with what God is doing in the Philippines and southeast Asia, through your financial and prayerful support. Take heart from the words re-written to the tune of “Onward Christian Soldiers” as the closing hymn of 68th UCCP anniversary celebration, as their invitation to us and our invitation to you:

Onward, Christian people, let us rise and go;
Bearers of the gospel, where there’s human woe
Not in cross-topped towers, lifting to the sky
But among the needy, saying, “Here am I”
Here’s my hand, co-workers, Give me your hand too;
Let us work together, There is much to do!”