A letter from Choon and Yen Hee Lim serving as Regional Liaison for East Asia, based in South Korea

Congregations: Give toD506665 for Choon and Yen Hee Lim’s sending and support

As the Chinese New Year begins many people wonder what the year 2016 has in store for them. Many Koreans visit fortune-tellers to learn how their fate will unfold in the Western New Year and the Chinese New Year (Feb. 8-10). But traditional signs and beliefs also offer insight into what to expect for the New Year. The year 2016 is the Year of the Red Monkey, the 9th animal of the 12 Chinese zodiac signs. People born in monkey years (1944, 1956, 1968, 1980, 1992, 2004 and 2016) are considered to be talented, energetic by nature, and skillful in many things, but also impatient, arrogant and snobbish at the same time, according to Chinese Zodiac interpretations. What are your signs and beliefs for 2016?

I’d like to share our new thing in 2016 with you. Last year I met Heidi Linton, Executive Director of Christian Friends of Korea, and Chris Rice, Director of East Asia for the Mennonite Church Council (MCC) in Seoul, and we shared together about our work. At that time we came up with an idea to have Mission Gathering for North Korea in Seoul in 2016. So we had the gathering in our Peace and Reconciliation Network office (PR Network office) on February 11-13, 2016. Seven organizations that support North Korea in the ministry of education, agriculture, health, social and religion issues (working with Korean Christian Federation) got together and shared their work, listening and asking questions. We addressed practical matters, such as deciding to change our name to PR (Peace and Reconciliation) for North Korea and to increase our meetings from once to twice a year. I am thankful for their passion and great efforts for God’s mission in North Korea. 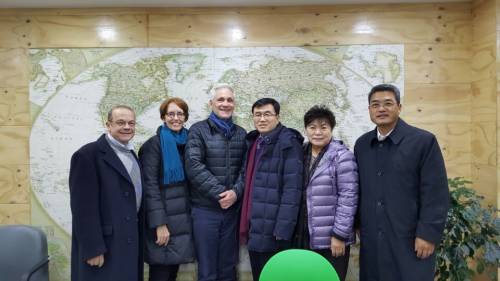 Chris Rice (center) in our office

I truly believe that God does new things through people. And so the most important thing about our meeting was to get to know each other through fellowship. We built strong relationships through the gathering. I’d like to tell you about someone I met whose friendship has strengthened me and my ministry—Chris Rice. He treats me as his consultant and friend.

We have met many times in Korea and outside of Korea. He often invites me to attend the MCC’s special events and also when he has guests from their Canada headquarters. Another reason I feel close to him is that he is a PC(USA) missionary son. His father was a missionary to Korea. Chris left Korea when he was 10 years old. Even though he can’t speak Korean (now he is working very hard to learn it), he shares with me the stories about his childhood in Korea and how his father served Korean people after the Korean War. As a Korean-American I personally am thankful for his father’s sacrificial mission work and his passion for peace. There are so many Korean Christians who express their thanks to all the missionaries to Korea and those who support them. On their behalf I thank them for their support for the mission from the bottom of my heart.

When Chris held the Forum for Reconciliation on the Korean peninsula in Korea in 2013 he was director of the reconciliation center at Duke University. After the Forum he wanted to live in Korea. So he decided to change his work to the MCC so that he could do peace and reconciliation work in East Asia, especially for Korea. In 2014 he actually moved to Chunchon, South Korea, near Seoul (an hour and a half by car). Now we have become a team for the peace and reconciliation work. Sometimes I go to Chunchon or he comes to my office whenever we have issues to discuss. No matter where we live—in our birth country or elsewhere—a good friend is a true gift from God. What a good co-worker I have in Chris! I was interested, invested and energized by him. 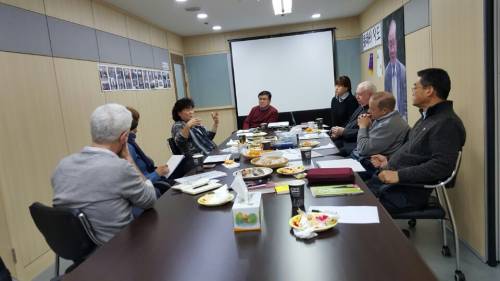 Mission Gathering for North Korea in our PR Network office

I pray for this coming Forum in Hong Kong on May 23-28. Through the Forum I want to be a better instrument for God’s Kingdom. For example, I will meet people from China, Taiwan, Hong Kong, Japan, South Korea, and the U.S. and hear their reports on their activities and situations. Through the sharing we can learn from each other how to face such struggles and challenges as Taiwan’s sunflower movement and Hong Kong’s umbrella movement. As a result I hope we can build a new network from the Forum so that we can support each other through the network and our prayers.

God said, “See, I am doing a new thing.” My new friendships and work with PR strengthen me to pray ever more fervently. Now I humbly kneel down before God, praying mercy for the Korean peninsula. Because following the recent nuclear test conducted by North Korea, I pray that all parties involved in the current situation on the Korean peninsula, especially South Korea, North Korea, the U.S.A., Japan and China, will work to reduce tensions, to promote dialogue, and to encourage negotiations for an end to the suspended state of war and for peaceful co-existence on the Korean peninsula—rather than measures that increase the risk of catastrophic conflict. Please join me in this prayer.

Last year we celebrated the 70th anniversary of Korea’s liberation from Japan and lamented the 70th anniversary of Korea’s division so that Korean people continue to be separated in the North and South by the most highly militarized confrontation in the world. The vision and dream of peace is threatened by any and all measures that heighten rather than reduce tensions in this dangerous situation. Any time I face this kind of great challenge, I look up to almighty God and ask God to do a new thing for Korea as well as East Asia. In this situation dialogue like the ecumenical meetings the PR leads is more important and more urgently required than ever. I invite you to pray with and for the people of both Koreas and redouble our efforts for peace and reconciliation on the Korean peninsula and East Asia.

Many thanks to all those who are supporting us through their prayer and financial contributions. Our work would not be possible without you. If you are not already supporting us financially, you can do this through the PC(USA) website, giving to E200491 (see the link below). Congregations can give to the DMS account D506665.