Building a Life of Faith. Support the Pentecost Offering.
Make A Donation Click Here >
Home › What We Do › Where We Work › Co-workers › June Prayer Letter, Update from Rwanda

Greetings from Rwanda. As we endure the restrictions of this pandemic, there are struggles we are facing that we never expected, but there are also acts of grace and caring for one another that humble and encourage us. That was what happened at a recent all-staff meeting at the Protestant Institute of Arts and Social Sciences. I do not draw my salary from PIASS, but I am part of the staff, and I witnessed the integrity of that staff at the meeting. With the announcement by the Rwandan government in mid-May that schools may not open until September, some private universities immediately announced official closings and dismissal of staff, since they have no income from student fees to cover their costs. Although PIASS had not been able to pay the staff during the month of April, they made no initial statement but consulted with upper management and the board, then called a general staff meeting to decide the way forward. The meeting was held in the main conference hall for those who could attend physically, all wearing face masks and sitting three chairs apart. For those unable to travel, since there are still travel restrictions, they joined via Skype, including the Vice-Chancellor, Dr. Elisee Musemakweli.

Using the technology and a large screen in the conference hall, the Vice-Chancellor recapped the problem and then outlined three possible options. The first was to close, as others had. This would mean stopping all teaching and basically restarting the year in September, hiring back whatever staff was available. The second was for everyone to take only 30% of their salary for the next four months, enough to live on, basically, and continuing to operate with online teaching, with staff doing essential work. This was not salary, but a small living allowance for everyone. The third was to offer the 30% to whoever wanted to take it, and the rest could leave and search other means of support, with the option to return in September. 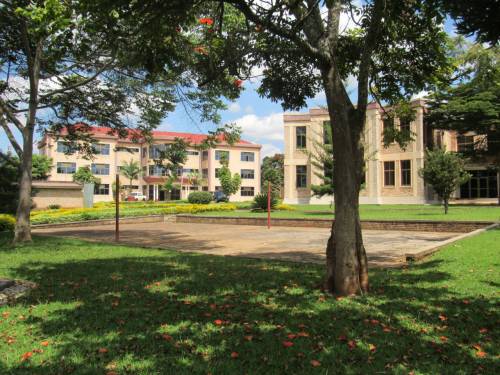 There was no question that everyone wanted option two, but there were some concerns. The first offered by one of the senior faculty members, as an amendment, was that the lower-paid staff (cleaners and gardeners) receive 50% of their salary, since they make so little to begin with and 30% would not be enough to survive. (They make between 50,000 to 100,00 RWF a month, the equivalent of $50 to $100.) So, they would get 50%, and the rest would take the 30%. Everyone keeps their jobs, working for a small allowance, the school remains operational, and people survive the hardship of this time. To the second concern, the ability to finance this, the Vice-Chancellor assured everyone that the school would take out loans, sell some unused property, or do whatever it took to keep this commitment. A third concern was that this amount was not enough to allow someone to live and still pay back loans he/she had taken out. The Vice-Chancellor was silent for a time, and when he finally spoke, he said he had just consulted with a banker and came with a solution of a letter of explanation to the banks involved, from PIASS, that the employees were not receiving salaries during the government restrictions and the borrowers would pay back the loans once salaries were resumed. (The government has given banks the freedom to negotiate loan repayments in these difficult times.)

After all concerns were addressed, a document was drafted and approved by all present, stating the terms of the agreement and signed by the Vice-Chancellor and a representation of all the staff. The Vice-Chancellor then announced that the payments would be retroactive to the beginning of April and cover that part of the salary that the staff had not received. The rest of April’s salaries would be paid after September, once the institution had an income again. I wanted to sing praise, for I had just witnessed the grace of a caring institution that wanted to provide for the people who serve the institution and the compassion of my fellow staff members, caring for the least among us. This was moral integrity in the midst of difficulty.

None of this directly impacts me, since my salary comes through PC(USA) and your faithful support. Thank you for your support of me and the ministry here, which enables me to work among people of such integrity. Times are hard for everyone around the world and I do not take your support for granted. I could not be here without that support. Please continue, during this difficult time, as you are able. You are making a difference and enabling me to work with these amazing people.