A Letter from Ellen and Al Smith, serving in Belarus, Germany and Russia

Just after Easter (Western calendar), a small group gathered in Minsk, Belarus, to begin a journey together through Belarus, Ukraine and Russia on the theme of peacemaking — a travel study seminar sponsored by the Presbyterian Peacemaking Program. It has been five years since the war broke out in the Donbass region of Ukraine, that wedge of land in the southeast corner of Ukraine on the border of Russia. It is a wound that doesn’t heal. But the conflicts within this region are not limited to Donbass. There has been interchurch conflict within Ukraine that dates back decades and is complicated by the Orthodox understanding of protocol. The nationalism that has infected the globe has inflamed the situation in and between Ukraine and Russia as well. 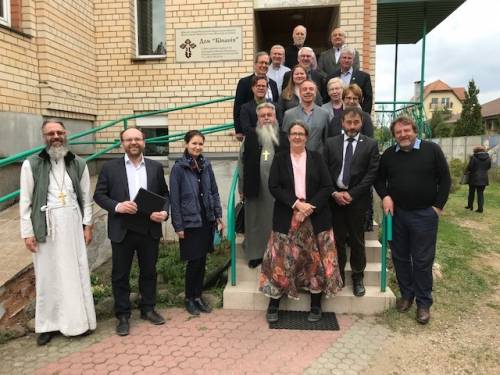 Participants in the concluding consultation in Minsk.

Seeking greater understanding of the complexities of the multiple and interconnected conflicts and seeking out peacemakers, we set out from Minsk, neutral ground, planning to return there for reflection, gathering at the table voices from Ukraine and from Russia, hoping for conversation that would bring some clarity. We were not sure such a conversation would even be possible. Since the beginning of the planning process a year and a half ago, the situation has evolved in unexpected ways.

A flare in the conflict between Ukraine and Russia arose when the Russian navy blockaded the Sea of Azov, cutting the port city of Mariupol off from the Black Sea. In response, the Ukrainian president imposed martial law across the southern half of the country, including several cities we had planned to visit.

Finally, three days before our arrival, there was an election in Ukraine. President Poroshenko lost to Volodymyr Zelensky, the star of a very popular television comedy — Servant of the People. Mr. Zelensky has no political experience other than portraying an outspoken school-teacher-turned-president. It was an interesting time to land in Kiev. Throughout the two weeks of our journey, everyone with whom we talked prefaced their remarks with the phrase, “It’s complicated.”

Getting ready for this trip, I was not sure that anyone would want to talk to us in the midst of all the complications, but to my surprise, everyone wanted the chance to share their piece of the story. Not only that, but they helped me make connections with people of differing perspectives. I have discovered the network of peacemakers, and they give me hope. We spoke to many of them, and they helped us unpack the history just a little and recognize the pain that is behind the conflicts, as well as the pain that aggravates the conflicts today. The painful history of Soviet times is intertwined, and it too is complicated. The break in relations between the Russian Orthodox Church and the Ecumenical Patriarchate means that people within the now two Ukrainian Orthodox churches cannot share communion.

But there are bright lights. There is Yuri, whom I first met in 2014, at the beginning of the present conflict. In the raw emotion of the time six months after the Maidan revolution when voices of nationalism were drowning out voices of reconciliation, he was working to bring people together at the table for dialogue. Acknowledging mistakes on all sides, he continues to be a voice for peace in Ukraine. There is Serhey, a theologian engaged in dialogue and reflecting on who the church is called to be in the changing circumstances. He challenges people to be mindful of what they post on social media — sometimes, the things we laugh at aren’t funny at all. There is Alla, engaged in care for internally displaced persons (IDPs) from Donbass, helping children and families to find positive outlets for their frustrations and healing for the trauma of their lives. There is Lidiya, helping people to build bridges within communities broken by conflict, mentoring youth and addressing trauma. There is Georgii, working to bring people together through new expressions of Orthodoxy. They all know one another and are working on something positive in spite of the complexities. They are aware of the barriers that society creates. Sometimes together, sometimes through parallel efforts, sometimes individually, they are working to build peace.

From Kiev, we traveled to Russia. I found myself uncomfortable for the people we met with because they were outspoken in public places, but they gave us other pieces of the story. In order to hear a perspective from Donbass, we traveled south to Belgorod, very close to the Ukrainian border (Kievan controlled Ukraine). People in this city used to work in Kharkov, Ukraine (50 miles away) and often traveled there. There are many family connections across the border, family connections strained by the conflict. A young man from Donbass is currently studying in Belgorod. He shared a very different perspective about the war from the one we heard in Kiev. It’s complicated, and it’s sad.

So, what does it mean to be a peacemaker? How do we pursue this call? Yuri was one of the people we invited to Minsk for our concluding seminar. When I asked him to participate, something that involved coming to the table with a Russian speaker, he asked only that the Russian participant be someone who would listen to what he had to say. Peacemaking involves giving people a voice, allowing them to speak the truth they know. It involves intentional listening and resisting the urge to react. Peacemaking requires us to recognize societies’ tendency to demonize the other, to recognize that tendency in ourselves, and to take the time to find the humanity in the other. Peacemaking requires the courage to speak the truth with love. Peacemaking is about the little things that help individuals heal and find their own steps forward.

We lost a great peacemaker this past month. I find Jean Vanier’s words a guide to who we are called to be:

“Each human being, however small or weak, has something to bring to humanity. As we start to really get to know others, as we begin to listen to each other’s stories, things begin to change. We begin the movement from exclusion to inclusion, from fear to trust, from closedness to openness, from judgment and prejudice to forgiveness and understanding. It is a movement of the heart.”

This fall, the Russian Mission Network will be in Russia, September 20-22. We had a deadline for signing up of May 15, but it is not too late if you would like to come join us. Next year, we are going to begin something new. We are now in discussion about expanding the existing network to a Russian/Ukrainian/Belarusian Mission Network. Won’t you be a part of that conversation?

I plan to be in the U.S. in August to help our daughter transition to Milwaukee for graduate school. I will have time for some itineration if there are churches that would like to hear more about this very complicated part of the world.

For all those who are with us in prayer, who support us with financial gifts, who send us notes of encouragement, who help to share the story, we give thanks for you. Your commitment to missions broadly and specifically gives us hope.