A letter from David Cortes and Josey Saez, serving in Cuba

Individuals: Give online to E200519 for David Cortes-Fuentes and Josey Saez-Acevedo’s sending and support

Congregations: Give to D507587 for David Cortes-Fuentes and Josey Saez-Acevedo’s sending and support

Those of us from the Caribbean know that the hurricane season is something we need to live with and be prepared for. It is a season in which we are a little more focused on knowing the latitude and longitude of every developing storm in the central or eastern Atlantic Ocean. But while we can be as prepared as possible, Mother Nature will do what she will. This Hurricane season has been relentlessly unmerciful.

David and I were able to follow all these weather-related events much more closely while we were still in the States. I stayed back in Louisville to have cataract procedures done for both my eyes. (Which, by the way, has gone fine. Just waiting now to get glasses so I can actually see!)

As David and I kept watch on the news, we prayed for safety for those in the path of these powerful storms. At times, we were in awe as the “hurricane hunters” flew into the eye of these storms to provide The Weather Channel with precise data. We wondered whether the Cuban news stations had access to such precious information. We downloaded several Cuban news media apps and contacted friends and colleagues in Cuba to receive as much news as possible. It was good to hear voices from Cuba and to know firsthand of their preparations for the impending hit.

As we watched and listened to news coming out of Cuba, we became increasingly concerned for its people. Cuba’s fragile, poorly managed food and goods supply chain and distribution system, which contributes to chronic scarcity in every community, was going to suffer even more. We wondered how they would move forward if Irma hit them directly. We were not aware of what was going on until Rector of Seminary Rev. Carlos Emilio Ham-Stanard sent an email stating:

The hurricane was much worse than expected. Many people lost everything they had, and in many areas of the territory the situation is critical. In the city of Matanzas, where our Evangelical Seminary of Theology is located, Irma’s effect was felt very strongly (tough winds and heavy rains). In our campus, although we had no deaths or serious structural damage to the buildings, Irma caused considerable destruction, primarily in the green areas. Eighty percent of the trees and plants were demolished, including the vegetable garden. which serves hospitals and part of the city’s population. Also damaged were the plumbing and water system, some ceilings, part of the lighting and electrical system, and the paint on some of the buildings.

As news started to reach us about the state of the seminary by email, pictures were included that showed some of the areas. Seeing most of the trees, vegetation and some of the structures either damaged or totally wiped away was heartbreaking. It was very hard to see pictures of the age-old laurel tree that had weathered many a storm before Irma—giving its shade and hearing the prayers, hopes and dreams of many—lying on its side. Jose Martinez Leon “Chuchi” shared with us the first pictures he took of the laurel tree, and wrote a heartfelt poem in remembrance of this magnificent tree and its significance in the seminary community. We would like to share these pictures and the poem with you.

Our Laurel Tree
It was hurricane Irma’s path
with her impetuous winds
that knocked down our Laurel tree,
witness of our many resurrection celebrations.
At sunrise, it was knocked down, lying on the ground,
with its naked roots exposed
and under the shadow of a stormy sky.
Fallen in front of our flags
Waving ever so lightly
inviting us to come together to unite as community
to an ecological commitment,
as if it rests after a turbulent fight.
Three days were enough
to see our Laurel to raise up again.
In its broken trunk, new limbs will grow
in which birds will nest again
and we hear their songs joining ours
praising the all life-giving God,
forever, and ever. Amen
by Jose Martinez Leon “Chuchi,” September 2017
Translated by David Cortes-Fuentes

After surveying the damage, the seminary community geared up to clean up as much of the debris as possible. Students, employees, administrative staff, faculty, entire families, children and neighbors all worked together for many weeks to make this possible. They worked collaboratively to get the campus up and running so that classes could resume as promptly as possible, which is a testimony to their resilience, faith and work. 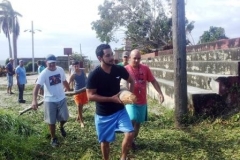 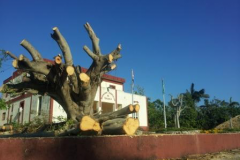 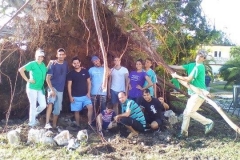 When David arrived at the seminary on September 22, he was happy to see that everything was clean. Yet it was very sad to see the vegetable garden destroyed. There were now just one or two fruit trees dotting the landscape. Things are slowly returning to some normalcy. In the month since David’s return, the usual vegetable street vendors have been nowhere to be found. The markets have very little on their shelves. Dry beans—a staple here—have only recently made their appearance here and there. Eggs are only being given out via Cuban ration cards. Luckily, we live within the seminary community where we have some access to things we otherwise wouldn’t. We have heard that in some areas, mostly in rural communities, things are dire. In agricultural areas, Hurricane Irma has left her mark. This makes things even tougher for an already fragile economy. Yet, as people of Faith, we stand in Hope. Yes, with a big H. The people of Cuba continue to live with and in Hope. As many of our Cuban friends have echoed, “Hope can never be taken away”. There may be scarcity, but there is no scarcity of Hope! It is a resilient and stubborn Hope that has shown David and me, and many of our Presbyterian family who have partnered with the Cuban church over the years, that the God of Hope (with a big G and H) continues to be present.

Gracias, thank you to each of you, our family, friends and Presbyterian family that continually pray for us and support us financially. We are truly grateful. Our partners in Cuba continually express their gratitude to the Presbyterian Church USA for continued partnership, grace and presence with the Cuban church and its people. We pray that we can continue together in partnership on this journey. We prayerfully ask you to consider, if you have not done so, pledging your support to our ministry in Cuba. Please see the below gray box for information on how to give.