Since we arrived here eight months ago the Lord has set a clear path for us, and it has been very rewarding to follow it!  We thought Governador Mangabeira was very different from what it is.  It’s a small town.  There are nearby towns on both sides, so it’s easy to gets things done.  The people are very friendly and have accepted us as part of their community.  It doesn’t matter that we’re the only U.S. citizens here; we are one of them.

The Christmas and New Year holidays were uplifting for us.  Some people had said that Christmas wouldn’t be celebrated by the town because of the economic situation, devaluation of the currency, and government problems. However, the local merchants’ association gave a car away.  Anyone who spent 20 reais (the equivalent of $5.50) received a ticket for the drawing.  Some stores and individuals decorated for Christmas.

One of our members, Nanni, plans the order of worship each week.  She included Advent themes and hymns.  It was the first time in Brazil that we have celebrated Advent.  Very typically, we had a worship service ending at midnight on Christmas Eve and a service to welcome in the New Year.  We worshipped as a family and greeted each other with hugs and wishes for a Happy New Year at the end of the service.

We had a birthday party for Jesus one Sunday during Sunday School.  It was for both the adults and the children.  Usually the two groups do not spend time together.  During the opening each Sunday the children and adults sit on different sides of the sanctuary and do not interact much.  During the party, people could make decorations or bookmarkers of different symbols that stand for Christ, find different names for Jesus in the Bible, do activities to learn more about Jesus (do word searches or crossword puzzles, create puzzles or color pictures) or just visit.  Happily everyone did at least one thing and a number of the adults were proud when they found the 15 hidden words or answered all the questions.  We ended the party with snacks and birthday cake, naturally. 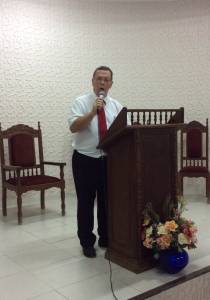 Gordon preaching at the Christmas service

During the holidays it was wonderfully evident that we are considered part of the families here.  After worship on Christmas Eve we went to a typical Christmas dinner.  Each person brought a present for the person whose name they had drawn; everyone played games and ate delicious food.  We left “early” at 2 am.  After worship on New Year’s Eve we celebrated the wedding anniversary of church friends and neighbors with delicious cake and snacks.  The next day we were invited for a swim and a typical New Year’s Day luncheon.  We had rice and beans, of course, and a variety of meats cooked together in a big pot.  It’s so nice to be part of our friends’ everyday lives.

Our presbytery, the Presbytery of Salvador, has only seven churches located in the state of Bahia, nearly as large as Texas.  In January we attended the yearly weekend presbytery meeting.  It was held in Salvador, the capital, in a convent where we could fellowship between and after the sessions.  Four people from our church attended: an elder, a young man, and us.  We have many friends and acquaintances in the presbytery, so we enjoy the meetings.

Schools are on vacation from mid-December through the beginning of Lent.  This year schools will return in mid-February.  Dorothy has been teaching only her adult English class during this vacation and Gordon’s catechism class will continue in mid-January, so things have been lighter for us.

It’s been rewarding this year to see church attendance increase and have new people feel welcome at the church.  People have been able to meet their desires to learn more about the Bible and to fellowship with other Christians. 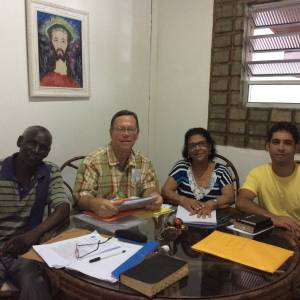 Gordon serving as chair of a presbytery committee

Children’s Sunday School has been a challenge this year.  As many of you know, when we arrived there was one class for children ages 5-15.  A van picked up the children who live in a poorer neighborhood a distance from the church.  Unfortunately many of the children showed no respect for the teachers, the pastor or any adults and came for the activities, snack and a chance to get away.  In 2016 we have suspended the transportation.  We are not going to reward bad behavior.  Sunday School is continuing, so if the students are interested, they may come.  The grandchildren of one member, up to six children, come when their uncle gives them a ride.  They are well behaved and interested in learning new things. A couple of adults who are now attending bring their children, so we are “starting over.”  Please pray for wisdom to hear and follow the Lord’s guidance as we develop a new program.  The first Sundays were calm classes in which two children attended, learning new songs and new Bible stories.

Both of us have found good physicians.  After medical problems, Dorothy’s epilepsy is being controlled by much less medicine and Gordon’s diabetes is well controlled.  Dorothy walks early in the morning with many other folks in town; she participates in a balance- and stability-enhancing program while Gordon goes to a fitness center.  We are feeling good all around.  Yes, there are problems and ups and downs, but we are finding our work very rewarding.

We would be happy to pray for any needs you have.  Please send us any prayer requests you have and join us in prayer for our work, especially the children’s Sunday School work.

Thank you for your financial support in 2015.  Please prayerfully continue or begin to support our work.

In Christ,
Gordon and Dorothy