As you read this letter, you have probably heard LOTS of ads and SPECIAL OFFERS for Christmas purchases.  Unfortunately, sales do not wait until the day after Thanksgiving like they used to do years ago.  In the large Brazilian cities decorations will go up in early November and stay until January 6 (Epiphany).  But in our small town commercialism has not taken over Christmas yet. Friends here tell us that perhaps there will not even be decorations put up by the city.  Christmas will be celebrated only with a church service on Christmas Eve, ending at midnight, and a New Year’s Eve service on December 31 that will allow church members and friends to begin the New Year in prayer and worship instead of partying.  As you celebrate Advent and Christmas may you remember this, even when you feel overwhelmed with things to do:

For to us a child is born, to us a son is given,
and the government will be on His shoulders,
And He will be called
Wonderful Counselor, Mighty God,
Everlasting Father, Prince of Peace    (Isaiah 9:6).

We have been traveling quite a bit in the last few months. Mid-September Gordon was invited to preach on missions at a church his parents had worked in during the years 1973-76 in Araguaina, Tocantins. The lay evangelist who worked with Gordon’s parents is still there and participating in the church at age 90.  God’s mission through that church has produced another three Presbyterian churches in town.  Their membership has grown to 200.  Gordon was impressed with their 60 young children besides youth and young adults.  They have doubled the sanctuary and installed air-conditioning.  The day he arrived it was 100° F.  The church was celebrating 50 years of being an organized church and over a period of time was inviting persons who had worked at that church over the years to come and celebrate in God’s mission. 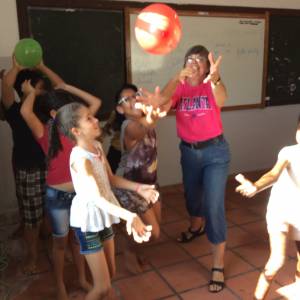 The local presbytery held a continuing education retreat in May to give a quick overview of the Old Testament.  In October the group met again for a review of the accounts of the Gospels and the book of Acts.  It was time well spent.  Our speaker was a Lutheran pastor and seminary professor.  He did a wonderful job of conveying the message of the Gospels in an easy-to-understand way.

Two conferences sponsored by the United Presbyterian Church of Brazil (IPU) were held in Rio de Janeiro in the month of October.  In early October Gordon attended the one for pastors and church leaders designed to review the IPU’s understanding of their role in God’s mission.  There were 40 participants, only about 15 of them pastors. At the end of the retreat a number of the participants shared concrete examples of how they are living out God’s mission by ministering to the needs of their communities.  The stories ranged from person-to-person evangelism to offering counseling to people addicted to drugs. At the end of the month Dorothy attended the women’s conference, along with a couple of the ladies from this presbytery.  There were over 100 ladies in attendance.   That conference’s theme was “Restoring Our Relationships with Each Other and the Lord.”  It was a refreshing time with fellowship, learning and recreation.

The session of the church we serve, pictured here, is made up of elderly women.  The longtime women members of our church are widows, single, or have husbands whose health prohibits them from serving the church.  The women are very strong leaders.  Many of the members of our church remember when the church was full of children, mostly their own.  They wish it could be like that again, but we have to have new younger members first.  Please pray that the younger people who are beginning to attend the church will strengthen their relationships with the Lord and become active members of the church. 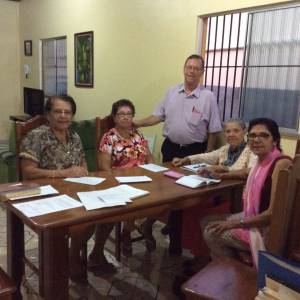 Gordon and the women of the session

As we have mentioned in previous years, Children’s Day, October 12, is a VERY IMPORTANT holiday in Brazil.  During Sunday school we had a party with singing, games, refreshments and treats, which included Play Dough for them to take home.  Play Dough was made for each child.  That brought smiles, as in Brazil only regular clay is available and it is very expensive, so children do not have clay to play with in their homes.  The children enjoyed the party.  Our one Sunday school class has been divided into a class for children ages 5-9 and another class for 10-16-year-olds. The teens are studying the Bible whereas the younger children are told Bible stories with activities to reinforce the lessons.

Dorothy told her English class students that Children’s Day is not celebrated in the United States, but one girl immediately said, “That is no reason we can’t have a party in our class.” Dorothy decided to have a party, playing simple games using English words and concepts.  The students were able to quickly learn some everyday English and had fun doing so.

We are becoming more active in the community.  Gordon was invited to bring a word of greeting to the City Council this month.  Our church is the oldest Protestant church in town.  In his greeting he emphasized “Blessed is the nation whose God is the Lord.”  He told them we were happy living in a small town and looked forward to working together on community projects.

Thank you for your prayers and financial support.  If you want to give us an end-of-the-year financial gift, we will feel blessed to receive it.   Have a wonderful Advent and Christmas!

In Christ,
Gordon and Dorothy