A letter from Tom Goetz serving in Japan

On Friday, June 26, 2015, Kazuyuki Sasaki, a Japanese Christian who has lived in Rwanda for the past 10 years, was a guest speaker at the Hokusei Gakuen University Chapel. He spoke about his mission work in Rwanda and his hope for peace and reconciliation, both in Africa and in Japan. Sasaki is the Planning and Development Officer for the REACH Organization in Rwanda. His mission is to promote restorative justice in a land that knows all too well war and all of its cruelty.  Rwanda is a small landlocked country in East Central Africa. In April of this year Rwanda marked the 21st anniversary of the genocide through which approximately 800,000 people were brutally slaughtered. The following is a summary of my interview with him on that day.

Mr. Sasaki, can you speak about what you have been doing in your current work in Rwanda?

For the last ten years I have been working in Rwanda for a ministry of peace and reconciliation in collaboration with local Christian organizations. For the last four and a half years I also worked as a lecturer at a Christian university, teaching peace studies for Rwandan, Burundian and Congolese students. 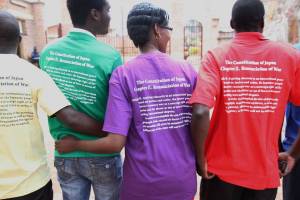 Last year in my course called “Introduction to Peace and Conflict Studies” I talked to my students about the campaign to defend Article 9 of the Japanese Constitution. Article 9 is a clause in the National Constitution of Japan outlawing war as a means to settle international disputes involving the state.  I have a Japanese Christian friend who works to spread awareness about Article 9 to people around the world. I used the Article 9 T-shirts that I received from her to introduce this topic to my students.

Who are your students and how did they react when you talked about Article 9 of the Japanese Constitution?

Many of the students in my class are from countries where there are ongoing wars, or threats of war in the near future. They are young adults who have to constantly face the dangers of war. Some of them have lost their own family members due to genocide and civil wars. At the start, students felt that Article 9 was nothing more than idealism. However, some students could see the value of Article 9, that is, to empower citizens to restrict the state when the state is preparing to wage a war that the citizens do not want.

It has been in the news that Prime Minister Abe wants to alter the interpretation of Article 9. How does this influence your teaching? 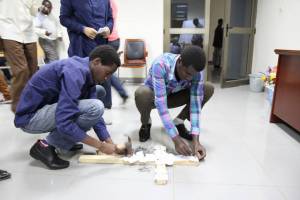 As for my teaching, I feel it is best to get the students talking. Floriane, one of the Burundian exchange students, posted the English translation of Article 9 on Facebook and asked, “If you had this article in your constitution, would you scrap it? Or would you protect it?” This brought about great discussion on Facebook. Some posted, “It’s easy to say, but impossible to practice.” Some were more aggressive in their responses, stating, “Didn’t Japan send troops to Iraq? Stop talking such nonsense.” To this she replied with confidence: “I would want to protect it because with this article in the constitution, the citizens could pressure the state to respect it.”

These were the words that she used to conclude her comments: “I think it is a failure to depend on violence. Why can we not find an alternative way other than violence to resolve conflict? Violence always breeds further violence. This certainly is not to be desired deep down in our hearts!”

What does Article 9 mean for Japanese people? And why is there a desire to change it?

Article 9 embodies a no-war pledge made by many Japanese people. However, last year the Abe administration made a cabinet decision to change the interpretation of the constitution. Through this the government argues that it is possible to exercise “the right to collective self-defense” without changing the constitution. Nonetheless the government is attempting to completely abandon Japan’s pledge to renounce war and all that it has held dear all these years. Exporting weapons and military technology, providing overseas development assistance to other state armies, using academic institutions to undertake research on military technology, etc., is what we are looking at. Under the Abe administration all of these things that are so immoral have been vigorously promoted. Currently this administration attempts to initiate security-related legislation.

Will Japan further be engulfed in wars that it does not want to be a part of? Or will it continue to be a peaceful nation?

This is the moment of truth.

What are your thoughts as a Christian?

In this age, when Japan seems to be marching on to war, let us be sure of the cross that is engraved in our hearts. Let us remember that Jesus was killed on the cross. He is never on the side of the killing. War is waged on all sorts of beautiful rhetoric. Those who want to wage war say it is necessary for defeating evil, for promoting justice, for protecting our families and country, and for establishing the foundation for world peace. However, I want to keep in my heart that the true God is not on the side of the killing. He is on the side of the dying, the discriminated, the mocked, and the abused.

What was your reading from Scripture today?

Verses that are written on a monument near the United Nations building in New York City. Words of the prophet Isaiah that he saw in a vision. A vision of a world without war. Can you guess?

I shall read it again:

“He will judge between the nations
And will settle disputes for many people.
They will beat their swords into plowshares
And their spears into pruning hooks.
Nation will not take up sword against nation,
Nor will they train for war anymore.”

It’s a pledge to renounce war, something all nations can do.

Thank you for your time.

You are most welcome. 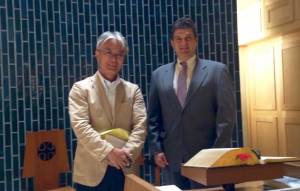 In the Hokusei Gakuen University Chapel

Postscript: On September 18, 2015, the United States welcomed Japan’s enactment of new laws that ease restrictions on overseas activities of Japan’s Self-Defense Forces, including allowing them to help allies even if Japan is not directly attacked. Such was a sad day for those who value peace.

Appeal: Please pray for and support financially all peacemakers, teachers, missionaries, and ministers within our Presbyterian Missionary Agency. The Presbyterian Church (U.S.A.)’s mission agency (PMA) needs your help today more than ever to keep not only our co-workers in the field, but our international mission volunteers and office staff on active duty as well. Please help.