A letter from Tom Goetz serving in Japan

With each day being warmer than the last, it is easy to recall the wonderful words of Psalm 118:24 with a sense of celebration:

This is the day that the Lord hath made, let us rejoice and be glad in it.

This Scripture passage is familiar and was used by at least one cheerful TV minister seeking to extend his particular version of the good news of Jesus Christ. I selected it with a sense of joy of what has happened to Hokusei Gakuen University since my last letter. In short, Hokusei Gakuen has been the target for bullying by Japanese ultra-right-wing nationalists. We have endured fax attacks, received bomb threats, our main telephone trunk lines have been tied up, and there are smearing video blogs just a click away. For those of you who are new to this, you may be asking what wrong we have done to deserve such.

We employ a retired newspaper reporter from the Asahi Newspaper who, decades ago, wrote extensively about the Japanese Imperial Army’s “Comfort Women.” This program forcibly pressed women into having sex with Japanese soldiers. It happened and it’s documented, most notably by former Prime Minister Yasuhiro Nakasone, who boasted about making use of it himself when he was a lieutenant in Indonesia. At this point the ultra-right-wing nationalists agree that such activity did happen, but that it was not the result of any formal organized program of the Imperial Army; rather, it was just opportunistic women, who were already prostitutes, following the movements of the Imperial Army and their “noble” soldiers. This is the point of departure.

Sadly, Japanese Prime Minister Abe has more than once nodded in approval of whitewashing Japanese history. Since my last letter, international media attention has grown. The volume of condemnation is louder with each day.

At this point I would like to repeat today’s Scripture. This is the day that the Lord hath made, let us rejoice and be glad in it. 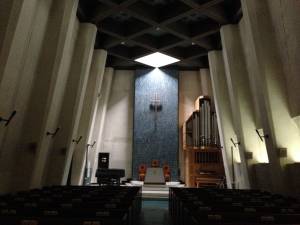 Hokusei University Chapel; note how the light radiates into a triangle: Immanuel, God with us‹Father, Son, and Holy Spirit

I rejoice because our university president decided not to overturn Professor Uemura’s contract for 2015. This was announced on December 17 at Hokusei’s Christmas dinner with a standing ovation. President Tamura stood by Sarah C. Smith’s founding motto for us to “Shine like stars in a dark world.” The name Hokusei literally means Northern Star. Our president had and has it within his authority to overturn Uemura Takashi’s contract, which had the majority backing of the faculty senate. Had he done so, our motto would have been drained of its meaning, our curriculum would have been subject to the approval of outside people, some of whom have little or no education beyond high school, our university as a liberal arts college would have ended there.

December 17 was the day that the Lord had made, and we rejoiced and we were so glad in it.

The threats of violence continued. Members of ultra-right-wing nationals promised to disrupt our entrance exams. In early February Hokusei opens its doors to future students by hosting its entrance exams over a three- or four-day period. With these threats of violence in mind, uniformed Japanese National Police were posted conspicuously in and around Hokusei with an untold number of plainclothed officers milling about as well. Enrolled students were told not to come to school; faculty and staff who were not on duty were ordered to stay at home. Hokusei Gakuen University for the entrance exam week duration was managed as something akin to a minimum-security prison.

No violent event happened. The young examinees had the peace and tranquility that so many take for granted.

Those few days were the days that Lord had made, and we rejoiced because we were glad.

With the results of the exams announced, it became time for the examinees to receive word that Hokusei would invite them to matriculate. Each year we invite more students than we have seats for because we know from past experience that a certain number will pass exams for national universities and will definitely go there. So, in short, each department “high-balls” accordingly in the hope that we come as close as possible to filling our limited number of seats in each department.

This year has been quite different from years past. Just by considering the initial wave of early responders, we are ahead significantly. There is even talk about possibly adding new classes to our freshman English Program since there are limits to class sizes. What a wonderful problem to have.

Why would this year be different? Is this just a normal variation within an otherwise dynamic population? Perhaps, but I will weigh in differently. I think that most Japanese do not appreciate the ultra-right-wing nationalists, and the bullying Hokusei has endured was counterproductive. If anything, the smear campaign made Hokusei look like a university that walked its talk. And somehow that communicated a resolve that parents of college-aged children found favorable when considering other options for their children.

There have been days that the Lord has made, we have rejoiced and are glad in all of them.

I was on a committee last year that initially recommended maintaining Professor Uemura’s relationship with Hokusei. I joined the support group to seek as much support as possible from other staff and faculty by holding discussion forums. A colleague or two saying in effect, “Hey, thanks Goetz-er for the headache you have delivered to the faculty senate” approached me! To that I smiled and said, “You are welcome, now do your job.” For a while the senate was divided, but as the bullying continued, the professors figured out that if we caved in and terminated our relationship with Professor Uemura, we would stop being a liberal arts university and our motto “Shine Like Stars in a Dark World” would be meaningless.

Has this happened before? In Endo Shusaku’s book Silence something very similar happened— the expulsion of all foreigners from Japan and the systematic attempt to eradicate Christianity from within. This was centuries ago. The complaint of Japanese right-wing nationalists is nothing that any Japanese can ignore. What can be inferred is that the Japanese in Hokkaido today have actually thought about wartime atrocities, Prime Minister Abe’s manipulation for whitewashing history, and Hokusei’s resolve for being truthful, and exposed it.

This is the day, which the Lord hath made; come and let us rejoice and be glad in it.

As we welcome new students to our community and we meet up with returning current students, let us remember that Psalm 118 is famous not only for today’s reading, but also for verse 22, which Jesus quotes in Matthew 21:42. “Have you never read in the Scriptures: ‘The stone that the builders rejected has become the cornerstone’?” This is not the only message. Consider verses 9-24:

The steadfast love of the Lord endures forever.

I would like to thank you all for your kind support through prayer, the postcards, and the birthday cards (what a wonderful surprise!). Your financial support for missions worldwide makes so much possible for so many people who otherwise would live in darkness. But, thanks to you, they can “shine like stars.” How can any well-off person simply close his eyes to the needs around him? The Lord teaches that we do not live for ourselves. And once we start sharing, even with what little we have, we experience a joy that can be had in no other way. So I wish to say thank you for all of you who support me and all PC(USA) mission co-workers.