A letter from Choon Lim, Regional Liaison for East Asia, based in South Korea

Every year facing a new year makes me conscious of the passage of time, how there is never enough time for what I need or want to do, and then I realize how I allow my times to dominate me instead of God. So, this New Year reminds me that God’s time is different from ours. Galatians 4:4 says, “When the fullness of time had come, God sent his Son.” My puzzle is we don’t know God’s future timetable. Some people try to predict the world’s end or say we are living in end times, but the verse reminds me that only God knows what the future holds. So the best New Year’s resolution I can make is to appreciate each day God gives me and to become a better steward to serve God.

In the fourth Mission Connections letter in 2016 I said my role was a bridge-builder and mediator. It began in February 2016 with a trip to China to help establish a strong partnership among seminaries in Jiangsu Province and Shandong Province in China and Presbyterian University and Theological Seminary (PUTS) in Seoul, South Korea. It was a pleasure to travel with longtime friend and mission colleague, Jeff Ritchie, whom I met at Louisville Presbyterian Theological Seminary (LPTS) in 1984. After this initial trip, the bridge-building began. 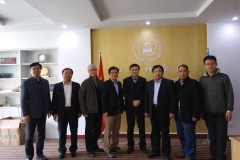 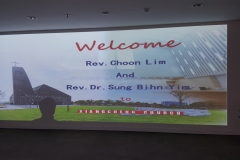 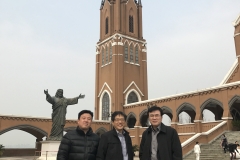 Rev. Gao Ming, president of Shandong Christian Council, chairperson of the Three-Self Patriotic Movement, and acting president of Shandong Seminary, visited Seoul with a group in September 2016, and I met with them in order to make connections with seminaries and churches in Seoul, Korea. I also had the privilege of visiting Suzhou Seminary in Jiangsu Province again in October 2016 with a group from University Place Presbyterian Church in the U.S.A. and introduced them to Dushu Lake Church and Suzhou Seminary in Jiangsu Province. The two congregations have decided to form a sisterhood and will continue to engage with each other.

On February 28, 2017, Dr. Sung Bihn, Yim, president of PUTS, and I visited Suzhou Seminary and then visited Shandong Seminary on March 2. The purpose of the visitation was to make a connection between PUTS and the two seminaries in China so that they can work together to train laypersons and pastors in China. PUTS decided to send their professors and build up fellowship with an annual visitation of each other,

When I became a freshman at LPTS, Dr. Yim had just finished his master’s degree there. A year later, I went to PUTS as the first exchange student from LPTS, and he came to see me while he was serving his military duty in Korea. Last year he became the president of PUTS and visited my office in Seoul. At that time I shared with him my vision for China, which had a lack of professors in seminaries. After hearing that, he promised support and joined my China mission trip in February 2017.

When Dr. Yim and I went to the Suzhou Seminary on this trip, we met a graduate student from PUTS, Mr. Zimyung, Park, who is Korean-Chinese. Mr. Park is a full-time staff member at the seminary. This example of God’s provision is very important because if PUTS sends any professors to the seminary, Mr. Park can translate Korean into Chinese. That was one of the main obstacles to assisting seminaries in China.

After finishing our trip to Suzhou, we moved to Jinan in Shandong Province by train to meet Rev. Gao Ming at Shandong Seminary. There we also met Dr. Myoung Ho Yang, our mission co-worker from Hong Kong. When Rev. Gao visited Seoul in 2016, he told me Shandong Seminary will build a new seminary in 2017 and the students will be increased to 1,500, so he asked me to help. With this trip as we received reports from the seminary and we felt we should support them. There are 1.5 million Christians in Shandong Province with 3,800 churches, but there are only 260 pastors (including 40 very old pastors).

There was another example of God’s providence on this trip. Two years ago my helper for North Korea mission, Rev. Sung Nam, Chen, a pastor of Setop Church in Shenyang, China, introduced Rev. Young-pil Kim to me as I planned to visit Wehai in Shandong Province. So I met Rev. Kim at his church in Wehai and preached at his Korean-Chinese church on Sunday. This year when we had a meeting with Shandong Seminary, Rev. Kim was there as their teacher and translator. He will host music and worship courses in his church at Wehai as a part of Shandong Seminary (Rev. Kim was a musician before he became a pastor). Since Dr. Yang’s major is Worship and Music, we plan to send him there on a short-term mission to work with Rev. Kim in the near future. PUTS will send professors there for other courses at Shandong Seminary.

As we see in the story I share with you, God’s time and God’s plan are different from ours, but one thing is sure—that God uses us to connect each other so that God’s Kingdom on earth can be established when God’s fullness of time comes. I humbly ask God to use me as a better steward of my time now and in the future. I pray that God teaches you too to be a better steward of your time now and forever.

Thanks for your gifts and prayers so that I can enjoy the work of bridge-building between partner churches across different languages and cultures in East Asia. Without your support, I couldn’t continue the work of salvation God initiated by sending Jesus Christ to the world.