It was a joy receiving five new members into our church on Easter. They are very different, bringing a variety of spiritual gifts to our congregation. The wife of one of them had been praying for over 40 years that he would accept the Lord as his Savior. He was always happy to have their children raised in the church but never wanted to take that step personally. Finally her prayer and the prayers of others have been answered. He is very excited about being part of the church, inviting friends and family to participate in something he missed for years.

Another new member had been active in the church years ago, even serving as an elder. He drifted away due to his desire to be successful in the business world so that he could meet the financial needs of his family. His desire to use his free time to get away from worldly stress was more important to him than church and his relationship with God. Now he wants to renew his walk with the Lord and he and his family have become active in the church again.

A young woman who grew up in the church and knows the Bible well also finally felt the desire to join the church. 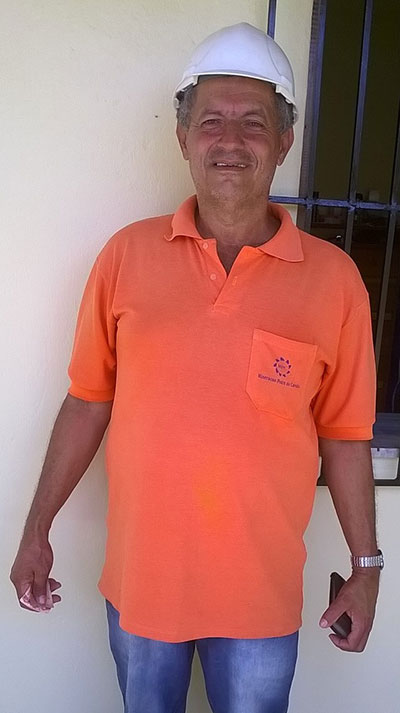 Jamie in his quarry work clothes

Jamie, a neighbor who was pictured in a previous letter, is one of the new members. His grandfather was a founding leader of the church. He wasn’t a wealthy or well-educated man, but he was known for strong Biblical knowledge and that he lived out his faith. Jamie’s parents have eight children. They were not a wealthy family, but the church and education were important to them. He said, “During my childhood I regularly attended church with my family, a fundamental factor in the building of my character.” Jamie is the oldest child and helped his mother raise his brothers and sisters.

As a child he attended church regularly, but as a teenager he began to drift away, working on many Sundays. He drove a truck. On weekends and school holidays he helped people move their household possessions. He drove long distances and slept when he returned home, thus didn’t have time for church. He attended church some and the church folks joked about him being a regular visitor.

Jaime married Selma, who was brought up in the Catholic Church. They both respected each other’s religion, attending each church jointly on special occasions, but they didn’t participate regularly in either one. He got a college degree and continues to teach middle and high school math. He has always lived in our town, near his parents even though all his other brothers and sisters went away to bigger cities where they found more opportunities. He served a term as the vice mayor of our town. He was known as an honest man, serving the people. Realizing that the political pressures on a mayor are very strong, he withdrew from politics instead of running for mayor, though many people wanted him to do so.

He continued to teach and drive a school bus in addition to his teaching job. Most Brazilian schools have three sessions a day, morning, afternoon and evening. He drove a bus before, between and after sessions. He also started taking people on bus tours on the weekends. He has three daughters and helped his wife raise them among all his other responsibilities. You can see he likes to be a busy man, a hard worker.

Later he began to work at a nearby rock quarry, becoming the manager. He continued to teach school at night. He is known for encouraging his students to study hard to improve their lives and open future possibilities. Students feel free to talk to him and are encouraged to try new things, often continuing their studies whereas before they had no dream or future goals. At the quarry Jamie is a well-liked and highly respected boss, treating his employees equally and encouraging them to be supportive of one another regardless of their level of employment. He and Selma were recently invited to serve as attendants at an employee’s wedding because of the support this couple had felt from him. 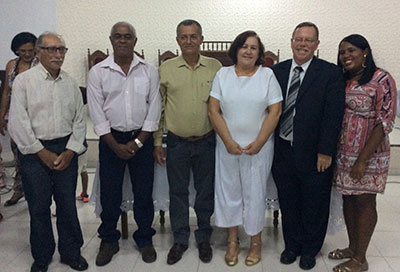 New members of the church with Gordon

In this last year Jaime felt the Lord’s calling to return to the church as he strengthened his personal relationship with the Lord. When Gordon offered catechism classes, he wanted to learn more about the church and make a public profession of faith, so he joined the class.

Jamie recently told us, “I am very encouraged about the future and am certain I am following the path close to Jesus. I am certain that I have the victory of eternal life.” He often reaches out to others, helping to meet their physical, economic and spiritual needs. He wants to help the church reach out to others in the community by filling needs they have and sharing the love of Christ with and without words.

Thank you for praying for each of these five new members, as they have made the decision to commit their lives to Jesus, learn more about Him, and serve Him in their daily lives. Please consider and pray about supporting our work financially. We are very grateful to the many people who have responded to our need. Your prayers and your financial support make our work possible.