Christmas Joy Offering — support our leaders: past, present and future.
Make A Donation Click Here >
Home › What We Do › Where We Work › Co-workers › Ministry Through Fun Times

A letter from Esther Wakeman serving in Thailand

Congregations: Give toD500900 for Esther Wakeman’s sending and support

In January Payap University hosted the 5th ASEAN Textiles Symposium—an international event that included a visit of the Crown Princess of Thailand to our campus—which is a huge deal. The whole Payap community worked hard and cooperated wonderfully. The first and second floors of our library were transformed into a bamboo showroom filled with gorgeous fabrics and clothes from the region. The princess seemed genuinely interested, and everyone was pleased with the good press and the good fun.

Two fashion shows were organized by Ajarn Suchinda, the director of the Christian Communications Institute (CCI).  Many of you have enjoyed watching CCI’s Thai dance and drama performances over the past few years. Suchinda put his creative genius to work in a similar way for the fashion shows. Our students were the models and I was like a proud mama watching them strut their stuff on the catwalk. I especially liked the show using all Thai materials—Thai silk is gorgeous, and some of the creations were delightful. These events showed us we can do a great job when we all put our hearts into it. It was a helpful, unifying event. 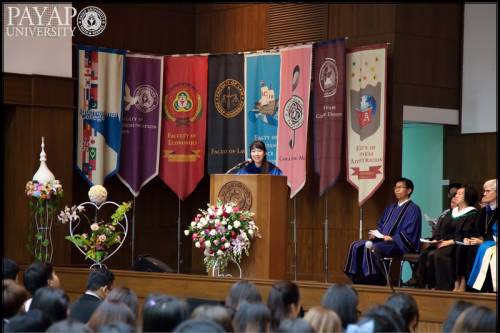 In February my student development team was in charge of Payap’s mini-marathon (walk-run) fund-raiser. I was the chair of the committee and initially I didn’t relish the job. I confess I was just going through the motions trying to do my duty. Payap’s fund-raising/support committee of outside advisors usually helps sponsor this event, and during one of its meetings the chair challenged me that we were just doing the same old, same old. She suggested adding a costume contest to the race and said she would sponsor the prize money. Even as she said it, I realized I love silly dress-up stuff and having fun in community.

I was so grateful that she challenged us. I woke up to another opportunity to serve in a creative way. So we added the “fancy costume” contest to the event. It made the whole thing much more fun. And on the morning of the event I found myself walking with Fit, a first-year student who had dressed up with some friends. He told me that he chose Payap because he wanted to get good in English and have a chance to study abroad. He also told me that he had become a Christian since coming to Payap through the friendship of a fellow student, Win. Win became a Christian when he was a student at Prince Royal’s College (where I taught 35 years ago, when I first came to Thailand). The daughter of one of our teachers shared her faith with him. 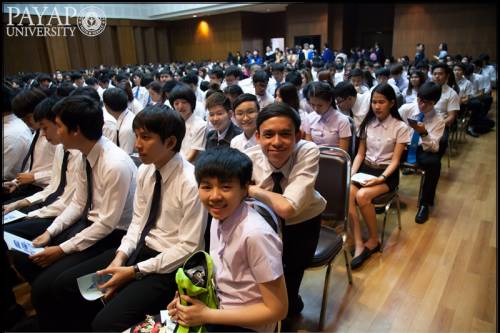 Fourth-year students enjoy Baccalaureate. The young man leaning forward has a disability, but his name is “Able” and he gave me a big hug when I pinned him with his Payap pin. I met him his first year and have enjoyed watching his progress through Payap.

At the end of March the chaplain’s office held our baccalaureate service, in which our students receive a lapel pin with our school flower on it. They dress up in their school blazers, the College of Music sings a song of blessing, and a McGilvary College of Divinity teacher preached. Dr. Chananporn spoke on success and reminded students that success isn’t possible without the support of many. She also assured them that if in the future they find themselves at a time when they feel they have no support, they can be sure that God is with them, loving them, and ready to support them fully. I’m grateful they go with that message clearly shared.

The highlight of the service for me was seeing the twin sisters graduating from our law school who also came to know Jesus during their years at Payap. They are being nurtured by First Church Chiang Mai. I also saw a young man finishing in Communication Arts who has come to faith recently, and Xompor, an English major who became quite interested in knowing Jesus when she was studying abroad in Wisconsin and lived with a warm and caring Christian family.

I’m glad to be working at a school that is providing quality education much needed in Thailand, but my deepest joy is being part of a school that is being used by God’s Spirit to draw young people into God’s family. They are not coming in droves, but there is a steady trickle. Pray with me for a real revival—that many more staff and students will experience the deep love God has for them personally.

Thank you for your friendship and support. Presbyterian World Mission has recently informed us that financial goals for sending and supporting mission co-workers for 2014 were not met and if the trend continues, next year five mission co-workers may have to end their service early and the following year up to 40 may need to return home early. My support has been increasing for the past several years, for which I’m most grateful. I would also ask that you prayerfully consider increasing your gifts for my work or for general mission needs.