A letter from Ellen Smith, regional liaison for Eastern Europe, based in Germany

This past Monday Eric Hinderliter gave his last lecture at LCC University (formerly Lithuanian Christian College) in Klaipeda, Lithuania. Eric and his wife, Becky, have taught there in the business department for the last 16 years as mission co-workers for the PC(USA). You might wonder why we would have co-workers teaching business in Lithuania, but looking more closely at LCC University would provide the answer. 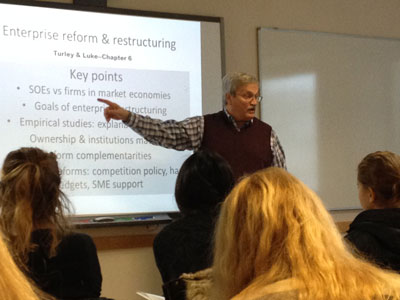 LCC was established in 1991 shortly after the collapse of the Soviet Union, a time of tumultuous change as countries broke away and began the process of restructuring their societies and building something new. LCC worked to develop a model that would provide leaders for the new contexts of these countries. They established a model of liberal arts education from a Christian worldview, helping students to develop critical thinking skills and broadening their experience through community projects and hands-on practicum to provide students with the vision and skills they would need to be participants in the building of society in their home communities. Today LCC has some 600 students from 27 countries, the majority from countries of the former Soviet Union but now beginning to bring students from the Middle East. They have succeeded in attracting students from beyond the Christian community, something with which similar institutions established in the region have been less successful.

Burkhard Paetzold (Regional Liaison for Central and Eastern Europe) and I traveled to Klaipeda last November so that I might be introduced to the institution and to begin a discussion together about what’s next in the PC(USA)’s journey with LCC. We spent time with the university’s president and vice president to hear about vision and needs. We spent time with department chairs for Psychology and Political Science, particular areas of need for professors. We spent time with staff involved in Student Life and community projects. We spoke with support staff and former LCC students involved in organizing a summer language institute for high school students, bringing in volunteers to teach English as a Second Language. 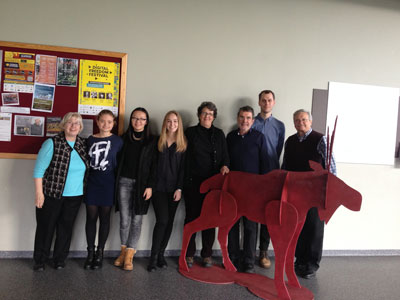 After sitting in on Eric’s lecture we had the chance to sit down with five students, one from Lithuania, one from Russia, one from Kazakhstan, one from western Ukraine. and one from the Donbas region of Ukraine. Each of these students had other universities that they might have attended, good universities, but they chose LCC. What LCC offers, which might not have been available in their home countries, is that Western model of education. They expressed the belief that they would have a more rigorous and challenging educational experience at LCC than the best universities in their own countries might offer. I asked each if they planned to go home after graduation. Lithuania is a part of the EU. Studies at LCC have provided opportunities for internships in Europe and the United States, and studies at LCC have influenced the way they now think about themselves and the world, but there was not one answer to my question. The Lithuanian student, a senior, wants to get some experience in the West but then hopes to return to Lithuania. The Russian student wants to return to Russia, either to her home city of Kaliningrad or to Moscow or St. Petersburg. The student from Kazakhstan, ethnically Korean, said she has changed as a result of her time in Klaipeda and does not see a place for herself back in Kazakhstan. The student from western Ukraine shared that she might like to go home but she did not think her parents would support that idea. The student from Donbas saw no hope for returning home; Donbas is a place ravaged by war.

Think for a minute about what this group of students represents. All born after the collapse of the Soviet Union, they don’t carry the history of that time. They carry a new history. For the Russian and Ukrainian students, it is painful and divisive, but as we shared a meal, there was no evidence of the divisions I have experienced from within their countries. In addition to the academics of LCC, there is peacemaking going on as they bring together a diverse group from this vast region.

In this past year LCC has attempted to establish an extension campus in the country of Georgia (also former Soviet Union) in order to bring students from Syria and Iraq for English language study so that they might be prepared for further study in institutions with English as the language of study. It has, however, proven too difficult to get potential students to an embassy where they might receive visas to Georgia, so they have sought other options. Recently they have found a way to get visas for a number of Iraqi students to study in Klaipeda. This is a promising development.

The time in Klaipeda gave me a valuable picture of the institution as a whole. The need to continue this relationship is clear. There are many ways to do that, both with short-term missions and perhaps with another long-term position. There is a role for high school English teachers in the summer language institute and for others in supporting roles. In May LCC offers three-week intensive courses, and they would welcome professors willing to teach these courses, especially in Psychology or International Relations. There could be opportunities for church groups to come and do repairs on the campus and get to know Lithuania. The Hinderliters’ retirement does not mean the end of an era. In fact, we have recently validated a new position for a mission co-worker to serve as a professor at LCC. As soon as we have one year’s funding commitment in place, we can begin recruiting for the position. The Presbyterian Church (U.S.A.) is committed to continue the journey with LCC, but we need your help. Might you or your congregation consider ways to engage in short-term missions in Lithuania? Might you or your congregation support our efforts to place another mission co-worker in Klaipeda?

We do wish Eric and Becky well as they return to the U.S. and find the what’s-next in their own journey.