A letter from Richard and Debbie Welch serving in Guatemala

Individuals:  Give online to E200505 for Richard and Debbie Welch’s sending and support

Congregations: Give to D507571 for Richard and Debbie Welch’s sending and support

Dear Friends and Partners in Mission,

The beginning of 2016 has been a season of celebrating the many connections we have in and about Guatemala. Rogelio, or Roger as we know him, is a former PC(USA) mission co-worker who recently returned to visit the area where he and his wife, Gloria, served for 10 years. Along with two friends who have supported the church’s mission in Guatemala for many years, we accompanied Roger on an odyssey of reconnecting relationships formed over many years of ministry.

In the early stages of the partnership between this Guatemalan presbytery and their U.S. partner, church leaders recognized the barriers poverty and the related difficulties bring to education. The Guatemalan people we serve value education and wanted their children to benefit from it. So these partners got to work. They envisioned a scholarship program that would expand educational opportunities for the young people of the presbytery. More than that, they discovered it would be the perfect ministry to bring together Presbyterians from around the world. We Presbyterians have long been committed to education. The National Evangelical Presbyterian Church of Guatemala (IENPG) is no exception. They have formed advisory councils and administrative committees focused on education, and they have invited Presbyterians like so many of you to share from God’s bounty and participate in these scholarships. Roger and Gloria worked tirelessly to coordinate this and other scholarship programs.

“Is that you, hermano Rogelio? I thought I recognized you. We haven’t seen you for a long time. I’m Maria, one of the students you helped with a scholarship so I could finish high school. It’s so great to see you again. I never had the chance to thank you and all the people who helped me. I’ve finished my studies and now I’m working in a bank. Thank you for what you and the churches did for me and my friends!”

We are grateful that the IENPG has asked us to be part of the scholarship ministry. Roger and other key players came to Guatemala to teach us what they know about the program and to introduce us to the local church leaders who provide local coordination of these programs. To students like Maria, the mission co-worker is often viewed as the source of their support. In reality, programs such as these require a lot of coordination between the local churches, their U.S. partners, and representatives from the denominations in both the U.S. and in Guatemala as well. 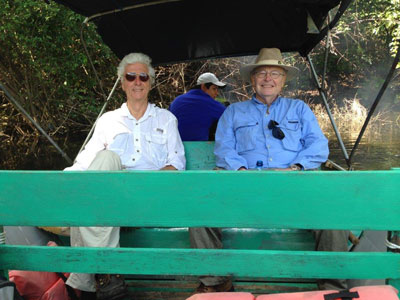 Fred and Chuck on the Passion River, en route to Aguateca

As Roger shared his chance encounter with Maria, we realized that we were witnesses to a holy moment of affirmation. It was a gift from God in which we can be reassured that the work and ministry to which God calls us to do and support has a real impact on lives it touches. We believe we all need these moments of affirmation. For us, they’ve become more important since we’ve been working in a context where so much suffering and poverty surrounds us.

“You know, I’ve got to admit it, I’m having a really good time here.” That was Richard’s cousin Jim. If the truth be told, Jim has always been Richard’s ‘favorite cousin.’ Ten years his senior, Jim personified the ‘man of adventure’ so easily idolized by a young kid growing up in suburban Chicago. He served in the U.S. Special Forces and taught Richard how to execute a parachute landing as they jumped off the picnic table in the back yard. Later he bucked the family tradition of going into the business world and instead pursued his passion for flying, becoming a pilot for United Airlines. Jim accepted the Lord Jesus Christ into his life and became active in a large congregation near Chicago. Now that he’s retired from United, he’s traveled around the world participating in many of his church’s mission endeavors. We were so excited when we learned that Jim wanted to visit us in Guatemala, see the country, and learn about the work we’re doing with the IENPG. 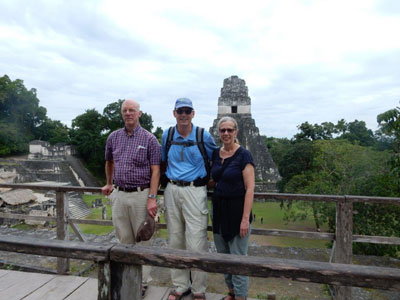 Jim, Richard, and Debbie atop a Mayan pyramid in Tikal

There is so much beauty, history, and culture to experience in Guatemala, and we love every chance we get to share this country with visitors. When we share our IENPG ministries with visitors, there’s also a good possibility of their being exposed to some of the poverty, injustice, corruption, and desperation that impacts many of the people with whom we have contact. We made a journey to the northern part of the country to visit Tikal, the national archeological and natural park and one of the ‘must see’ destinations for anyone visiting Guatemala. Jim also joined us to meet the family of a potential scholarship student in Cobán. Cesar, the potential recipient, suffers from a cleft palate and lip and has had to undergo several painful and expensive reconstructive surgeries. His family recently had to make a choice between continuing with Cesar’s education or with his medical treatment. We worry about ‘overloading’ visitors with the harsh realities of Guatemala such as this situation. But Jim was able to find the positive. In the midst of a reality that limits access to education and health care for poor people, he could see the impact of a gift from an anonymous donor in the U.S. 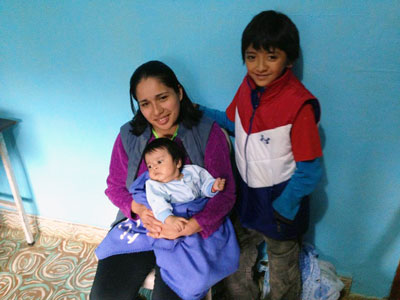 Cesar with his mom and baby brother

These are a couple of examples of how our connections with one another affirm, enhance, and fulfill the work God is doing here in Guatemala, using all of us in ways that often surprise us and encourage us. As Presbyterians we cherish the concept of community by celebrating these connections wherever they occur. We describe our denomination as ‘connectional,’ and our system is set up in such a way that we can rely on, depend on, and be accountable to one another. Since becoming PC(USA) mission co-workers we see the reality of our connectedness regularly in front of us. What we do can only be done with the blessing, affirmation, and continued support of the larger body of the church. So we close with words of thanks. Thanks from us of course, but also from Cesar and his family, from Maria and her family, and from the countless others for whom your support has made a difference in their lives.

Blessings to you all in this season of hope!

P.S. Having passed the midpoint of our first four-year term, we will be returning to the U.S. later this year (August—October) for a time of training and sharing about our ministry. Please write to us if you’d like to arrange a visit to your congregation or organization. We’d love to hear from you!