Christmas Joy Offering – Supporting our leaders: past, present and future.
Make A Donation Click Here >
Home › What We Do › Where We Work › Co-workers › Eye-Opening Experiences

A letter from Christi Boyd serving in Central Africa, based in the Democratic Republic of the Congo

Bodo is one of five students from the Theological Faculty of Fiangonan’i Jesoa Kristy eto Madagasikara (Church of Jesus Christ in Madagascar, FJKM) sitting around a table and looking back with me on their 4th year Missiology Field Study. Pastor Helivao Poget, Director of FJKM’s Ministry to Marginalized People, taught the course and sent her students in small groups on an immersion experience in isolated, underserved communities throughout Madagascar. They would study and encounter firsthand the most pressing issues for the people there, and come up with recommendations for the Church. Many of the students grew up sheltered from the harsh reality in these isolated places; for them it was an eye-opening transformative experience.The students had to collect anecdotal evidence not only from the local population but also from civil, juridical and religious authorities in addition to the security forces.  To prepare them for such a detailed investigation, Pastor Helivao had given classes in Communication, Research Methodology and Strategy Building.

“These traditions are contradictory to the gospel itself. They are very difficult to address. You first need to have the proper techniques, you need to have strategies, you need to be integrated for an interactive observation, and you do need all the methods that we have learned.”

Madagascar is a large and diverse island. Not surprisingly, the students made different observations, but they also identified common issues.
First, the students were struck by how difficult it was just getting to their localities. Beza was placed in Soavina, a small, remote village in the east. ”You have to take a bush taxi and travel all night. Upon arrival at Mananjari you go on a boat for the entire day, and then continue by foot for still another day and a half.” Zo recalled his long and uncomfortable car ride, packed between fellow travelers sitting on top of their luggage without the possibility of repositioning or stretching. “I couldn’t move during 14 hours. Even like this (he leans backward) or like this (he bends forward). You can do nothing in the car.” Iraka was amazed by the number of people that fit in a small sedan bush taxi “We were about 14 in a Peugeot 404, with the baggage and many other things. And the road is very bad.…It was very hard. I did not expect that. It was surprising.”

Travel difficulties merely served as an introduction to the more existential matters the students would face in their placements. In our conversation they described both physical problems like scarcity of food, water, education and financial resources, and systemic issues such as corruption, sexual exploitation, cultural violence and insecurity.

“To preach the gospel doesn’t simply mean staying in the pulpit and saying a few words. Good News should transform people’s lives. It should put in practice what we have received, what we know to help people. This is preaching the gospel.”—Beza RAHAROLAHIJOELINA

A common theme was how conjugal and sexual mores rule community life. Iraka explained that in northern Madagascar, where he spent his month, couples agree ahead of time on the duration of their marriage. “For example, a man and a woman want to be married for one year, and that is their contract. And after that year, they separate and get another partner, and make another contract.” But the rules are flexible, despite the norm of serial monogamy. During ancestral celebrations, for example, everyone can mingle without the notion of infidelity. “Even the parents don’t say: This is forbidden. They allow the children to go for that.”

By talking with the women, Iraka learned that a woman is not necessarily worse off economically when a couple separates. To the contrary, “It is an advantage for her to have a lot of husbands. She has her first husband, for example, and he had to give her a house, a cow, and land. When the contract is done, the husband leaves and the things stay with her. The man may have another wife, and do likewise with her.” The women he spoke with in this area usually had their first child between the age of 12 and 14. He wasn’t able to confirm whether the sexual relations that led to those early pregnancies were consensual or forced. But it is a matter of pride for a woman to give birth at a young age and bear many children during her lifetime.

At this point one of the faculty members at the table, a woman in her 60s, offered that when a girl becomes 12 or 13 years old, parents in these communities let her sleep by herself in a separate hut. A man or a boy may come around to stay with her, but when she gets pregnant and has her child, he leaves her for someone else. “This is a tradition,” she stated, “It is not [sexual] violence.”

“When we were there we saw the reality firsthand, more than on TV, more than in newspapers. Reality inspires you to act, to do something for them. Because it is a very sad situation there. Yes. And it encourages me to become a pastor.”—Zo

In poor countries like Madagascar, such deeply ingrained cultural practices can be a breeding ground for the exploitation of women through tourism and the sex industry. Tsoa, who did his immersion visit in Nosy Be, an island off the northwest coast known as a tourist resort, shared how the bankruptcy of the local sugar refinery and fishery, the two largest employers, left the local economy in shambles. The economic downturn led to investment in tourism, which boosted the sex industry. Sex tourism came to provide some level of economic security for the island’s unemployed families.

This change created a social predicament, particularly because the transient character of conjugal relations already caused such huge instability for younger generations, Tsoa explained. He doesn’t object to all tourism, but he observed how easily 13- to 17-year-olds are lured by quick money.  “There are many tourists, and what the young girls want is Vahaza partners, foreigners. Most of the girls have gone into prostitution, if I may say it directly like that. And that has had an impact on school attendance, because they don’t want to study anymore. Schooling doesn’t offer them a future, but with the tourists they have a future of money.” 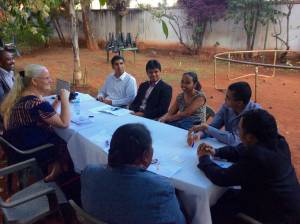 The fact that teenage girls have access to easy money also impacts their male counterparts. “Rather than work, they look for girls who have a foreign partner. We call this Djombilo.” Excusing himself for the explicit nature of his comments, Tsoa continued: “The Vahaza pays, but since they are advanced in age, they can’t sexually satisfy the girls. So the girls look to the boys for that, and pay them with money earned from the Vahaza.” He went on to list further social consequences as the money is spent on alcohol, drugs and nightclubs, which sometimes lead the boys to delinquency. Many minors end up in prison.

While national law prohibits sexual tourism with minors, enforcement is problematic in a context of widespread corruption. Generalized complacency means even bystanders become complicit. In their report Tsoa and his fellow students mentioned a joint venture between the regional tourism office, UNICEF and the International Labor Organization (ILO) for the promotion of The Code of Conduct to prevent the sexual exploitation of children. Workshops have been organized to encourage hotel managers and tourism operators to endorse the Code. Follow-up meetings and on-site visits monitor and evaluate compliance. The students further recommended that the authorities establish a social reintegration center for youth. They also called on the FJKM to encourage couples to form stable households through committed relationships and marriage and by teaching their children Christian values.

This missiology course is just one way the FJKM trains pastors to share the Good News of God’s love in Jesus Christ. Several PC(USA) mission co-workers are walking with our Malagasy partners as together we seek community transformation, the end of sexual violence, and quality education for Malagasy children. I am thankful to serve with a Church that has made ending sexual exploitation of children a matter of policy and program. Building on prior policies, the Presbytery of New York led the PC(USA) to endorse the code of conduct on sexual tourism in an overture to the 214th General Assembly in Detroit last year.

Thank you all for being part of these efforts through your effective actions, your encouraging words, your supportive prayers, and your financial support for our service through Presbyterian World Mission! Please continue to give, to pray, and to share with us your questions and comments as we begin this new year.