Christmas Joy Offering – Supporting our leaders: past, present and future.
Make A Donation Click Here >
Home › What We Do › Where We Work › Co-workers › Stories of Heartbreak and Hope

A letter from Christi Boyd, serving in Central Africa, based in the Democratic Republic of Congo

I first met Sifa last year February at Kyeshero Hospital in Goma, the provincial capital of North Kivu in east Congo. It was my first time to visit this beautiful but troubled part of the country. I had come to learn about ecumenical initiatives by women of the Church of Christ in Congo (ECC), who walk alongside survivors of the pervasive sexual violence for which this area has become so dreadfully notorious. Rev. Berthe Nzeba, a Presbyterian pastor and the national general secretary of the ECC women, was my travel companion.

Sifa shared with me how two men in black uniform had assaulted her several months earlier when her mother had sent her to the family farm to pick food for dinner. The men not only raped her but also caused internal lacerations by forcing a branch into her womb. In shock, Sifa wandered for several days and, by God’s Grace, found her way to an ECC volunteer counselor, who helped her get to the hospital. I was told that in fact this was the third time that Sifa had been taken in after a rape, but now she had become pregnant. Sifa is just one of the young girls, middle-aged women and elderly widows who have since shared with me about their ordeals. 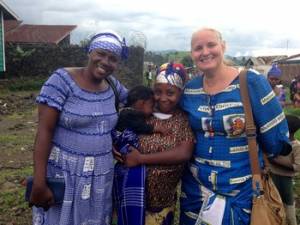 Sifa and her son with Jeanne Banyere, one of the ECC women leaders in East Congo, and Christi Boyd

Later in the year I had the opportunity to travel beyond Goma, a little deeper into the interior of the province. The idyllic alpine landscape, with cattle grazing the crisp green pastures and tilled fields covering the slopes, stood in stark contrast with the harsh stories I was about to hear in the hinterlands. Spending a night with survivors of rape in an ECC-affiliated shelter and counseling center gave us ample opportunity to listen to their accounts, which were still raw and heart-wrenching. Several women shared how they had been gang-raped and saw their children butchered in front of them. These experiences represent the living hell that tens of thousands of Congolese women and girls have gone through over the last two decades. In the aftermath of the 1994 genocide in neighboring Rwanda, the new regime there backed two Congolese rebellions in pursuit of perpetrators of the massacres who had crossed into Congo, and Rwanda continues to exert its influence in the region. In the protracted violence and insecurity nearly 5 million Congolese, in particular children, are believed to have perished due to conflict-related causes like starvation and disease.

In a cultural context in which women are considered the property of their social group, rape is seen as an intrusion of territory. In east Congo, women’s bodies have become a battleground for warring factions that apply systematic rape to humiliate and subject the enemy. In many cases husbands abandon their assaulted wives, and for the community in general, children born of rape are a constant reminder of defeat. The overall demoralization disintegrates the fabric of society. Because of its widespread and prolonged use by armed groups, the general population has grown increasingly tolerant toward sexual violence, to the point of rape becoming a social ill. Adolescent boys are especially susceptible to the attitudes of a thus construed masculinity and if recruited by armed groups they are prone to adopt their behavior.

To meet the huge and multifold needs of rape survivors like Sifa, the ECC women take a holistic approach to their ministries. Some 25 volunteer counselors retrieve newly victimized women and girls and offer them shelter and pastoral care. The women are recommended by their congregations and trained for this special ministry. Each of the counselors has been assigned to a number of villages in the area and is associated with one of four Listening Homes. These centers collaborate with nearby clinics for a first medical response to treat any infections the women may have contracted and prevent sexually transmitted diseases such as HIV/AIDS. For those needing special prenatal attention or fistula repair, transport is arranged to ECC-affiliated Kyeshero Hospital, and women who have greater psychiatric needs are referred to institutions that offer those specialized services. Abandoned by their husbands, stigmatized by the community and thus left to their own resources, many are selected for training in income-generating activities to better ensure their socioeconomic reintegration. These vary from sewing, baking and the weaving of baskets and traditional mats to soap making and manufacturing of fuel-efficient cookstoves. Just the ability to learn these skills has already a healing and esteem-building effect.

When Sifa heard that Rev. Nzeba and I were in the area, she walked for three hours—barefooted—to come and see us. It was an uplifting reunion. Not only was Sifa beaming with pride in her baby boy, looking so healthy, but we also learned that she had called her son Happiness. This is a wonderful sign of healing, acceptance and reintegration! Sifa explained that she spent six months in the hospital to await the delivery and have her fistula repaired. She still cherishes the memories of returning to the Listening Home in her area, where the women welcomed her, gave her food to eat, and offered her a place to sleep. The counselor gave her advice on how to take care of herself and prevent having to live through the same ordeal again: to not walk to the farm alone, for example, or go out at night. Before they took Sifa home her family was also coached by the counselor. They were instructed to not make her relive the experience, for example, by blaming her for her pregnancy. And at times when Sifa shows signs of anxiety, they should not further upset her, but rather draw her close and let her feel loved and at ease within the family. Thanks to the ECC women’s efforts, Sifa’s story became one of happiness and hope.

As important as these grassroots initiatives are, Rev. Nzeba and other ECC women leaders are working equally hard at the big picture—ending the violence. On the one hand, they are active participants in interreligious, ecumenical and civil society platforms, from the provincial level to the Great Lakes Region at large, to uphold women’s rights, fight violence against women, and promote peace. But they also champion global efforts to legislate the unchecked trafficking of Congo’s mineral wealth, as additional measure needed to give peace a chance. Today eastern Congo still harbors remnants of some 30 different militias, many of which reportedly exist on the illegal exploitation and trade of minerals, in particular gold, tin, tungsten and tantalum, or 3TG. This is how they came to be termed “conflict minerals” by international lawmakers and advocates who designed reporting mechanisms to make sure that products from the electronics industry and jewelry branch are not manufactured with minerals that trace back to militia-controlled mines in the Great Lakes Region. At the same time Rev. Nzeba wants to see the sector reformed so that Congo’s mineral wealth more directly benefits artisanal miners and host communities and improves the country’s educational and health services.

In Isaiah 58 we as God’s people are called to respond to the immediate needs of those who are suffering, to share bread with the hungry, bring the homeless poor into our homes, and provide the naked with clothes. But it doesn’t stop there. There is also a call for God’s people to respond to the root causes of suffering by “loosing the chains of injustice and untying the cords of the yoke,” a call to change the structures that holds people captive.

Thank you for your part in God’s liberating mission! As Presbyterian World Mission faces diminishing its stake in that mission through cuts in the number of mission workers due to the current financial projections, my husband, Jeff, and I feel urged to appeal to all of you to consider broadening and deepening your share. Please prayerfully discern to do so through our mission sending and support account E200314.