A Letter from Thomas Goetz serving in Japan

In this time of Lent and winter melting itself into spring, I am drawn to Hebrews 5:7-9. As it is written, “In the days of his flesh, Jesus offered up prayers and supplications, with loud cries and tears, to the one who was able to save him from death, and he was heard because of his reverent submission. Although he was a Son, he learned obedience through what he suffered; and having been made perfect, he became the source of eternal salvation for all who obey him.”

Characteristic of the writer, there is a diametric tone here. On the one hand, there is a “once upon a time” quality about it, and yet there is a “once for all time” emphasis, one that points to the Resurrection, a reminder for us that it is Jesus Christ who is the source of eternal salvation. We see this in action when Jesus is dying on the cross and cries out, “Father, forgive them, for they know not of what they do” (Luke 23:34).

In 1972, Hal Hopson published the hymn “Though I May Speak with Bravest Fire,” through which he gives voice to the desire to share God’s love, the personal and practical desire, and the spiritual desire that ultimately gives shape to ministry.

In verse one, Hopson talks about sound. The sound of speaking, but speaking without love amounts to nothing. In verse two, he talks about someone who accomplishes many tasks. Yet, without love, nothing will become of all that effort. And in verse three, he turns our well-gotten attention to the Spirit, beseeching it to control our hearts. The pre-Christian Romans said that only the head can control the heart, not the other way around. Such is non-Christian thinking with no room for a third way. That third way is the manner of the Spirit of God working in our lives. When we pray for God to come and control our hearts, changes happen, miracles begin, and life takes on a newer and deeper meaning. In other words, we engage in Spirit-controlled expression. “By this we worship, and are freed.”

There are around 40 Christian schools that are related to the United Christian Church of Japan, commonly referred to as UCCJ or the Kyodan by those of us who live in Japan. At one such school in Sapporo, a woman was hired to teach English literature. While I had known Rumiko for nearly 20 years, I had only known her from church gatherings. Talented, she played both the organ and the piano.

Even as a young boy, I was trained to attend critically to the sound of musicians. My mother, who taught piano for many years, would often remark to me, “Listen to how that pianist BANGS THE KEYS! She must be an organist.” Apparently, organists need to draw upon their lower back muscles to play “For All the Saints, For Whom Their Labors Rest,” while pianists rely more on a light touch to add the kind of tonal color that makes Debussy look like an audio version of Monet’s “Water Lilies.” And after the performance, sure as the moon rising in the east, my mother would ask, “Are you an organist?” The answer was always, “Yes.” Years went by, and I discovered that I too had that same discriminating ear. Thank you, mother. Not being a pianist or an organist, I learned, however, to keep my mouth shut, applaud, and think: “Ah, if she were only her. I know what she would do.” 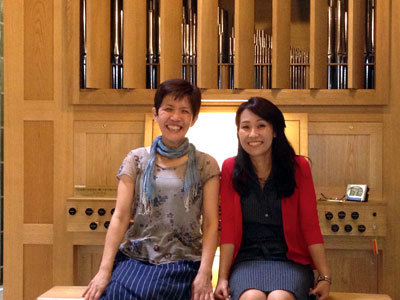 Rumiko, amazingly enough, played the piano with that needed light touch and the organ with authoritative control over the airflow to and through the pipes. Musically talented. And very bilingual. As she turned 40, she left Sapporo for London to get a Ph.D. in English Literature. As someone whose educational career had yet not taken off, she worked hard for years as a part-time and substitute English teacher in Japanese high schools, junior colleges, and universities to save money. After completing her residency, she returned and was quickly hired by one of our Christian UCCJ-related schools. I was delighted to hear that. But then I began to wonder. Someone who was obviously talented yet so often as quiet as a mouse, landing a full-time job in a regionally renowned university, teaching in her field of research? How?

The lesson that I learned was this. God does not only use noisy people. As the Hebrews reading illustrates, God needs people to follow Jesus’ example in offering up prayers and supplication with cries and tears. And these cries will not necessarily take the form of shouts. I have never seen Rumiko cry, but one must imagine going for nearly a decade and a half before landing a full-time job in one’s field.

One may feel relieved that Rumiko could make the best of a desert-like situation. Doing so is certainly not easy. In the book, Shutting Out the Sun: How Japan Created Its Own Lost Generation, author Michael Zielenziger leads us on a dark path depicting the lives of young people who would otherwise love to work, but somehow can’t due to repeated rejection and an ever-growing sense of learned helplessness. The word hikikomori refers to an adult who is a “parasite single” and lives at home with parents. What are parents to do?

From April to September of 2016, I was in Milwaukee, Wisconsin, for a six-month sabbatical. While there, I learned that the unemployment and under-employment combined rate for millennials in the United States is higher than I had thought. I wondered about young people in America who struggle as Rumiko did. Are we looking at a lost generation in the United States?

Here is some good news: of the many Presbyterian churches I visited in the Milwaukee, Chicago, Blackfoot, and John Knox presbyteries last summer, I rarely came across a church that did not have a wide range of ages. These churches provide venues not only for worship and fellowship, but for cross-generation friendships to be made, conversations to be had. 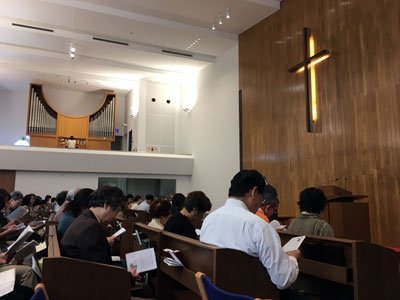 Who else do we take for granted?

Two thumbs up to all those welcoming and inclusive churches! And thank you for your hospitality and mission support. But let us not end here. Let us look around in our respective environs for talented people like Rumiko. Let us look for those who are more on the quiet side, who are often taken for granted and probably not thanked enough. And yet, through their Christlike obedience, are able to persevere through unemployment, under-employment, and other kinds of suffering, and show by example the reflection of a life that walks toward the Resurrection.

I would like to thank everyone I met who helped me gain focus for this mission letter. If your church supports a mission co-worker or an international mission volunteer, many thanks. Please keep up the good work. If not, please consider it. If this were all about charity, I would have gotten to this point right away. In a larger context, this request for support is more about lifting up and celebrating that certain kind of fellowship that arises from people in different parts of the world sharing common responsibilities in service. It is about a fellowship that exists because of interest in seeing the Lord’s name magnified and praised by members of churches in different lands, by people wherever they may be.

Ubi caritas, et amor, Deus ibi est. Where there is caring and love, God is always there.