A Letter from Christi and Jeff Boyd, serving in Congo

Individuals: Give online to E200314 for Christi and Jeff Boyd’s sending and support

Congregations: Give to D506075 for Christi and Jeff Boyd’s sending and support

Churches are asked to send donations through your congregation’s normal receiving site (this is usually your presbytery).­­­­­­­

“We were completely taken by surprise.”

Time and again, bewilderment was the emotion expressed by families displaced by the recent volcanic eruption of Mount Nyiragongo in the North Kivu Province of eastern Congo. There had been none of the premonitory signals that in previous bursts had alerted those living in the vicinity of the volcano and in the nearby city of Goma, such as the poignant smell of sulfur dioxide emitted in volcanic activity. 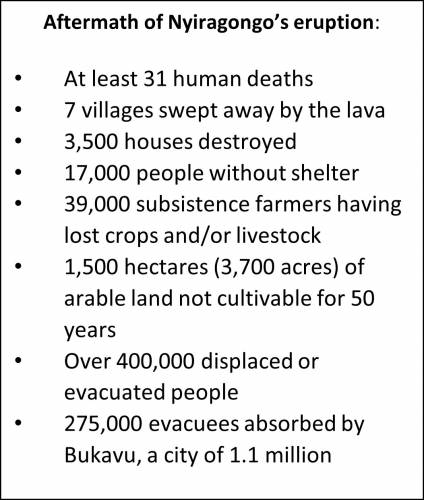 After sunset on May 22nd, Nyiragongo showed its fury by spewing its dangerously fluid and fast magma. At an elevation of 3,470 m (11,385 ft) above sea level and towering 2000 m (6562 ft) over Goma just 12 km away from its base, Nyiragongo is one of the two most active volcanos in the Virunga Mountains which are part of the East African Rift Zone that extends from Ethiopia to Mozambique. For four months, the world’s largest lava lake that used to give the 2000 m (1.3 miles) diameter crater its magnificent nightglow, had disappeared but new satellite images show that active lava flows are replenishing it once again.

In the initial panic triggered by the eruption, entire households fled to other towns and across the border into Rwanda. Five days later, the governor ordered the residents in ten of Goma’s 18 neighborhoods to evacuate as repeated tremors raised concerns for subsequent eruptions and for lava spillage out of fissures they were causing in several quarters of the city. Most evacuees found their way to Bukavu, in the neighboring South Kivu province, where many received hospitality in local congregations. As families got separated in the chaos, some children arrived unaccompanied.

At the behest of the Church of Christ in Congo (ECC), which serves as a national council of Protestant churches, Pastor Isaac Kalonji, the President of the Presbyterian Church of Kinshasa (CPK), asked me to accompany him on a visit to East Congo to take stock of the situation and discern a Presbyterian relief effort for the most vulnerable affected by the disaster. The response would be part of the ECC’s larger efforts through its Ministry for Refugees and Emergencies (ECC-MERU). Pastor Isaac serves on the ECC Executive Committee as delegate for the legal representatives of all ECC members churches in the Province of Kinshasa.

Three weeks after the eruption, the ECC-MERU Project Manager for North Kivu accompanied Pastor Isaac and me to a school on the outskirts of Goma, where 700 men, women and children had taken refuge after the lava flow had engulfed their homes. They shared with us their greatest concerns and prepared a detailed list of all adults and children per household that stayed on the school grounds. We also listened to evacuees who were taken in by ECC member churches in Bukavu and visited some of the host families.

Guided by the quite tangible requests from those who were displaced, Pastor Isaac worked with the ECC-MERU teams in both provinces to decide how to respond. With the initial support from Presbyterian Disaster Assistance, we were able to fulfill a request for tarps for all 100 families that we had met at the school near Goma. The tarps would provide basic protection and could be re-used at the time they needed to move elsewhere, the families had said. The funds also ensured food for the 50 most vulnerable households among them and helped pay for the return of about 200 of the evacuees in Bukavu who were eager to go back to Goma but lacked the means. Their return would relieve the 16 congregations that, in gracious compassion, had opened their doors but struggled to continue to provide for their daily needs. Several vulnerable mothers whose homes were destroyed received seed money to start an income generating activity.

Meanwhile, national ECC leaders in Kinshasa encouraged its member denominations to rally in support of their sisters and brothers in the East. The CPK mobilized its congregations in Kinshasa and received over $1,000 from 25 churches. In a gesture of solidarity, the CPK women gathered clothes, shoes, and household goods for the affected families.

Living with the curses and blessings of their co-existence with an active volcano, communities in the populated hinterlands of Nyiragongo have grown resilient to the constant threat. After all, most of them subsist on the highly fertile soils that have formed through the weathering of volcanic material vented in prior eruptions. This chemical process is slow, however, and the vast stretches of arable land that have been covered by this eruption will not be able to be cultivated again for the next 50 years. Still reeling from the recent traumatic experiences, the local population faces land scarcity and food insecurity for years to come.

Aware of such looming prospects after catastrophes like this volcanic eruption, our denomination seeks to not only engage in initial emergency and relief stages but also and particularly during the longer-term period of recovery. Your continued support for PC(USA)’s global ministries through the One Great Hour of Sharing during Lent and the Peace and Global Witness Offering during the Season of Peace – two Special Offerings that work in tandem – is much needed for the Church’s sustained engagement in God’s Mission worldwide. Jeff and I are privileged to be able to serve alongside our partners as they tend to the needs of those who suffer. Thank you for helping ensure our sending and support, as two of many PC(USA) mission co-workers serving on your behalf, through your gifts. Please consider giving to DR000088 for Disaster response in DRC .

I don’t know about you, but daily my heart grows heavier. News about the pandemic, wars, wildfires, gun violence, racism, earthquakes and hurricanes cloud my vision. It’s hard to see hope; our world is in a fog. Yet we trust that God’s light and love transcend the brokenness of this time.

God is at work transforming the world, and you, through your prayers, partnership and encouragement, are helping us share this good news. Thank you for your faithful and gracious support of our mission personnel.

How can we see through the fog? What will the church be after the pandemic? Could it be that God is doing “a new thing” and is inviting us to perceive it?  Through all the uncertainty we know that God’s steadfast love and care for all creation will prevail and that God’s Spirit is at work in each of us.

We all have an integral part to play in fulfilling God’s mission. As we seek to grow together in faithfulness there are three important steps I invite you to take in supporting our shared commitments to God’s mission:

Give – Consider making a year-end financial contribution for the sending and support of our mission personnel. Your support helps mission personnel accompany global partners as together they share the light of God’s love and justice around the world. Invite your session to include support for mission personnel in its annual budget planning.

Act – Visit The Mission Yearbook for Prayer and Study to delve deeper into the work God is doing through the PC(USA) and its partners in ministry around the globe: pcusa.org/missionyearbook.

Pray – Include our mission personnel, our global partners, and our common commitments to share God’s grace, love, mercy and justice in your daily prayers.

Thank you for your faithfulness to God’s mission through the Presbyterian Church. It is my prayer that you will continue to support this work with your prayers, partnership, and financial gifts in the coming year. We hope you will join us and our partners in shining a beacon of hope throughout the world.

In the light of hope,

To give please visit https://bit.ly/PCUSAmission

You are the light of the world. A city built on a hill cannot be hid. No one after lighting a lamp puts it under the bushel basket, but on the lampstand, and it gives light to all in the house. In the same way, let your light shine before others, so that they may see your good works and give glory to your Father in heaven. Matthew 5:14-16