Let love be genuine; hate what is evil, hold fast to what is good; love one another with mutual affection; outdo one another in showing honor. Do not lag in zeal, be ardent in spirit, serve the Lord. Rejoice in hope, be patient in suffering, persevere in prayer. Contribute to the needs of the saints; extend hospitality to strangers.

Bless those who persecute you; bless and do not curse them. Rejoice with those who rejoice, weep with those who weep. Live in harmony with one another; do not be haughty, but associate with the lowly. Romans 12:9-16

President Trump recently visited Japan. He was well received by Prime Minister Abe, met the new emperor and empress, was the center of attention at a sumo tournament and later maintained his affection for North Korean leader Kim Jong Un, despite the many unresolved abductions of Japanese nationals by the DPRK in recent decades. While many Japanese and Americans are both supportive and critical of their respective leaders, the need for Christians in both countries to show that their faith is one that seeks clarity and understanding is ever-important today, just as it was during ancient Roman times. 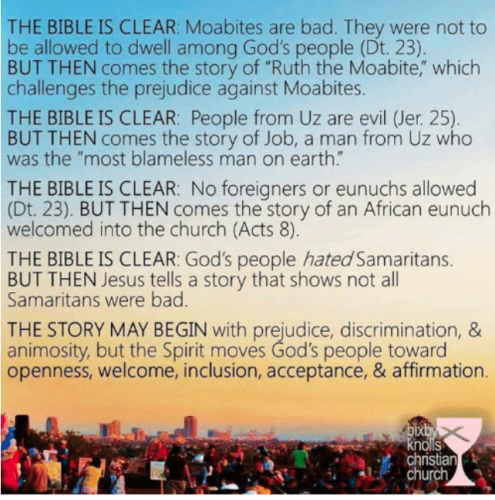 A recent meme on Facebook caught my attention. This is about the Bible and how clear, or rather consistent, it is.

How clear is the Bible? To answer that, the leaders at Bixby Knolls Christian Church (Disciples of Christ) in Long Beach, California, came up with a meme that has gone viral on social media. Like many Presbyterian churches, Bixby Knolls is an open, welcoming Christian community for people of all walks of life. We also share a love for the Bible, for from the Bible we learn about God’s love for the world. Though the Bible may look like a single book, it is a book of many books. There are 66 books in all, 39 in the Old Testament or Hebrew Bible, and 27 in the New Testament. It was written over centuries in Hebrew, Aramaic and Greek. It is widely believed that God did not personally write the Bible with a pen — rather, God inspired people to speak and write the content of the Bible to warn of dangers and to save humanity.

The meme strikes me as a refrain from a song. It has clarity and balanced simplicity that is almost lyrical. I can close my eyes and imagine being a child at a YMCA camp sitting around a campfire singing under the stars and clapping my hands. It speaks of how groups are bad, but then someone from such a group was not bad and the spin changes from suspicion to inclusion. Let us look at the meme.

Bad were the Moabites! The book of Deuteronomy says that they were not to be allowed to dwell among God’s people: “No Ammonite or Moabite shall be admitted to the assembly of the Lord” (23:3). 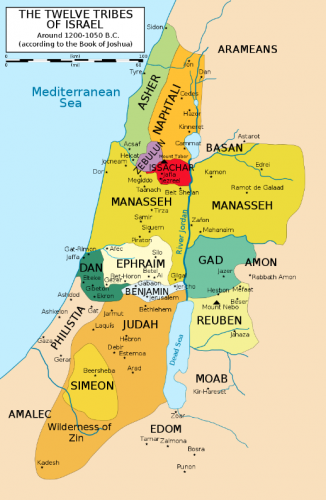 But then we later read the story of Ruth the Moabite, which challenges the prejudice against Moabites. “In the days when the judges ruled, there was a famine in the land, and a certain man of Bethlehem in Judah went to live in the country of Moab, he and his wife and two sons” (Ruth 1:1). Ruth is the grandmother of David, the greatest King of Judah and an ancestor of Jesus Christ, the savior. The Moabites were projected negatively, but that changed.

Within the context of the Hebrew Bible, we see a change towards inclusion and acceptance.

The meme continues with an example from the book of Jeremiah. The people from the Land of Uz are evil (Chapter 25). Uz today is in South Western Jordan. The inhabitants of Uz lived near the Judeans and were different enough to be untrustworthy. But then we read the story of Job, a man from Uz who was the most blameless man on earth (Job 1:1).

When speaking among Japanese, I often pause over the prohibition of foreigners part. In Japan’s recent past, foreigners were unwelcome, and contact with them was criminal. While that period ended roughly 200 years ago, particularly sensitive issues in the news, a story about one of the several disputed islands, for example, often evokes strong nationalist sentiment.

Many Japanese today are accepting of foreigners due to Japan’s economic rise as a leading industrialized nation. This would not have been possible without a concerted effort to internationalize not only at the business level, but also through friendship. Foreigners are no longer regarded, at least openly, as undesirables.

But what about eunuchs? They were regarded as equally unallowable to be among the people of God (Deuteronomy 23). I would imagine that very few people alive today are eunuchs according to ancient understandings. Eunuchs were people who were born as male and usually before puberty made to be neutral or sexless, neither male nor female. The purpose of a eunuch in ancient society was important. They were kept to sing, clean or be messengers for kings. Eunuchs were often royal slaves. Because they were weak, it was believed they wouldn’t be able to harm anyone in the royal family. Many discussed important matters of state, serving as valued advisors. They did not, however, have much status in society and were considered outsiders. But then, we read the story of an African eunuch welcomed into the church (Acts 8).

Do we have foreigners today? Yes. Our president tells us of a need for a wall. Do we have eunuchs today? When we look at this from the perspective of people who feel or have been ostracized from society due to their sexual orientation, the eunuch referred to in the Book of Acts still speaks to us today. The story shows how the church reached out and took the initiative in sharing the good news of Christ’s resurrection.

With Taiwan’s recent legalization of same sex marriages, one can only hope that Japan and the other neighboring countries will do the same sooner rather than later.

If there is anything that the Bible is clear about, it is time. It moves in one direction. While we have cycles and seasons, our life started with creation and will end at a set time. What is the constant? God’s love and will to save humanity throughout history. That is on God’s side. On our side, change is a constant that requires our attention at all times.

The last example from the meme is that of the Good Samaritan. The Judeans hated Samaritans, and they had their reasons. The entire region of Samaria broke away from the united kingdom, creating the Northern Kingdom and the Southern Kingdom. The Judeans felt Samaritans did what was evil in the eyes of the Lord. But many years later, Jesus tells a story that shows not all Samaritans were bad (Luke 10:25-37).

It is clear that the Bible is a book filled with stories. The meme concludes that, though a biblical story may begin with prejudice, discrimination and animosity, the Spirit moves God’s people toward openness, welcome, inclusion, acceptance and affirmation. Without the Spirit of God, we are left alone to find the easiest way to live and do things just for ourselves. But, we do not live just for ourselves. We learn that if a well-off person just closes his eyes and does not see the poverty, pain and suffering around, nothing will change. When we learn about the love of God and how it has moved through and changed history, we can begin to see ways to set that love into action for all people. There is very little new here. Paul saw a need to teach the members of the church in Rome about everyday Christian life. “Let love be genuine; hate what is evil, hold fast to what is good” (Romans 12:9-16).

Thank you for supporting me through prayer and financial contributions as I strive to set God’s love into action in Japan. Through your support, I am blessed with the opportunity to be a part of God’s mission in Japan.