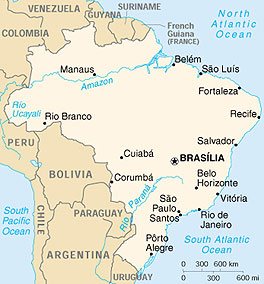 The United Presbyterian Church of Brazil

The United Presbyterian Church of Brazil was created in 1978 when Brazil’s oldest Presbyterian denomination expelled dozens of church leaders who, in a context of military dictatorship, were committed to maintaining a prophetic social witness, supported the ordination of women and enjoyed strong ecumenical relationships with other Protestants and the Roman Catholic Church. Today the United Presbyterian Church of Brazil combines its historic passion for ecumenism and social justice with a renewed commitment to evangelism and new church development. The church participates in the National Council of Christian Churches of Brazil, the Alliance of Presbyterian and Reformed Churches in Latin America and the Latin American Council of Churches.

The Graduate Program for Religious Studies

The program is located at the Methodist University of São Paulo and is one of the premier graduate schools for the study of religion in Latin America. Many Latin American Presbyterian church leaders have completed their graduate study here. The program is also available to provide orientation to mission study groups and Presbyterian seminary delegations seeking better to understand where and how God is working in Brazil. Presbyterian World Mission has placed mission co-workers with the necessary academic credentials on the faculty in the past and will continue to do so in the future.

Whatever happened to Liberation Theology? Why are Pentecostal churches growing so rapidly in Latin America? The Graduate Program for Religious Studies at the Methodist University of São Paulo can provide a space where your Seminary class or mission study group can explore these and other questions with world class theologians while praying, working and worshiping with Brazilian Presbyterians.

Evangelism: The Evangelical Presbyterian Church in Portugal has asked the IPU and Presbyterian World Mission to help them to alleviate a critical shortage by sending trained IPU pastors to serve as missionaries in Portugal. A key objective in this project will be to train lay leaders in Portugal.

Reconciliation: Despite recent gains, the gap between rich and poor in Brazil is great. Since their beginning, the IPU has accompanied and advocated for the rights of the landless, especially in Brazil’s impoverished Northeast.

Brazil Mission Network allows US churches and presbyteries to share and coordinate with Brazilian mission partners.  Join us!