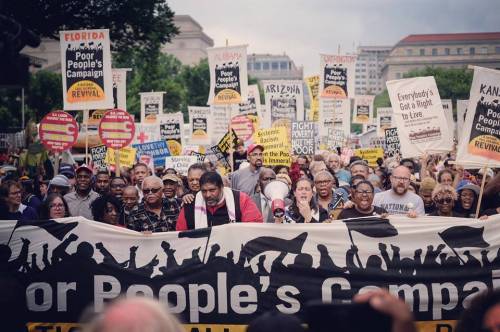 In February 2019, the Rev. Jimmie Hawkins, Director of the PC(USA) Office of Public Witness (OPW), stood with the Rev. Dr. William Barber and the Rev. Dr. Liz Theoharis to launch Phase 2 of the Poor People’s Campaign (PPC), which remains focused on the goal of organizing the 140 million poor folks in our country who live paycheck to paycheck. In order to defeat the evils of racism, poverty, the war economy, ecological devastation, and the distorted moral narrative, they are launching a National Emergency Truth and Poverty Tour beginning March 28. In 28 states, the PPC will tour locations in order to amplify these real U.S. emergencies. In June, the PPC will gather in Washington DC, for the People’s Moral Action Congress. Following this gathering, the Rev. Dr. Barber and Rev. Dr. Theoharis will tour approximately 20 states. In June 2020, they will return to Washington DC, for the Poor People’s Assembly and March on Washington.

During the summer 2018, the OPW partnered with the Poor People’s Campaign in its six-week campaign to demand living wages. The new PPC takes up the mantle of the original 1968 effort spearheaded by the Rev. Dr. Martin Luther King, Jr., which ended with his assassination. The new PPC is led by the Rev. Dr. William Barber and the Rev. Dr. Liz Theoharis, who is a Presbyterian minister who works with Union Theological Seminary in New York.

PPC’s webpage provides this context for its work—

“Over the past two years, the Poor People’s Campaign: A National Call for Moral Revival has reached out to communities in more than 30 states across this nation. We have met with tens of thousands of people, witnessing the strength of their moral courage in trying times. We have gathered testimonies from hundreds of poor people, and we have chronicled their demands for a better society.”

Last summer’s campaign took place May 14 to June 23. The Office of Public Witness had the honor to host leadership of the PPC as they organized in Washington. Each week consisted of four segments. On Sunday, the campaign gathered in worship to prepare for the week’s activities. Early Monday morning, lawyers provided a briefing on what to expect from the Capitol Police for those willing to participate in direct action or civil disobedience. At 10am, the PPC gatheredfor a rally on the grounds of the Capitol. Then they would march to the site of direct action. 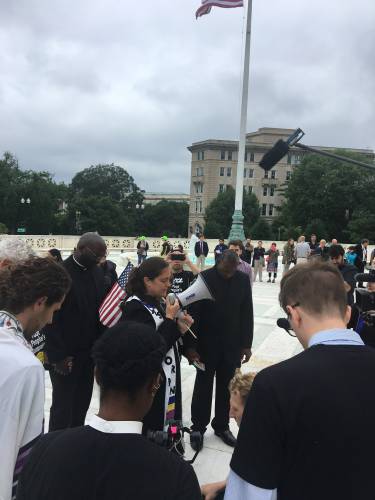 Each week the direct action too place in a different location—inside the Capitol, First Street, the Senate office spaces, to name a few. On June 11, there were two different direct actions. While the Rev.Barber led a group to sit in the middle of First Street (in between the East front of the Capitol and the Supreme Court), the Rev.Theoharis led a smaller group of nine to pray in the plaza of the Supreme Court. There, they were arrested and detained overnight, the only group to be held in such a manner. The director of the Office of Public Witness, the Rev.Jimmie Hawkins, was one of those nine.

The final event was held on June 23, which coincided with the last Saturday of the 223rdGeneral Assembly of the Presbyterian Church (U.S.A.) in St. Louis, MO. A multitude gathered on the national mall to hear Reverends Barber, Theoharis, and Hawkins speak about the goals of the new Poor People’s Campaign.